The worst things to say during a fight with your boyfriend 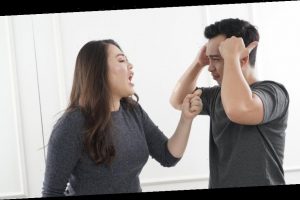 Fighting with your significant other isn’t easy. While disagreements are a natural part of any healthy relationship, there is definitely a good way to fight and a bad way to fight. It’s easy to get caught up in the heat of the moment and say all sorts of things that you don’t mean, and this can lead to resentment down the road, even if you and your boyfriend end up making up.

As marriage expert Dr. John Gottman told Verily, the key to fighting with your partner is to do it respectfully. Avoiding confrontation, or getting too critical or defensive does not bode well for the future of your relationship. Here are some things that you should never say to your boyfriend during a fight.

Never hit below the belt

When fighting with your boyfriend, make sure to actually talk about the problem. There’s no excuse for name-calling or hitting below the belt. “If you’ve been with your partner long enough, you probably have a sense of certain things about them that would be especially hurtful if you brought them up during an argument,” marriage and family therapist Gary Brown told HuffPost. “For example, if you know that your partner deals with anxiety, it would be unnecessarily hurtful to say something like, ‘You’re always just a ball of fear. What a weakling you are!'”

You should also avoid digging up the past. “When one partner is especially thin-skinned, anxious, guilt-ridden or just can never admit they’re wrong, they may employ a variety of methods designed to put the other person on the defensive,” said marriage and family therapist Amy Begel. “One method is to ‘throw in the kitchen sink,’ to list all the flaws of the other partner, to refer to past transgressions or to distract from the argument at hand by changing the subject.”

Fighting with your boyfriend shouldn't be about winning

If you get into an argument with your boyfriend, remember that it’s not a contest. Fights will inevitably break out, but you should see them as opportunities to strengthen your relationship. Don’t say anything that you can’t take back later. It’s far better to shelve the conversation and return to it when you can speak calmly than make hurtful jabs for the sake of winning the argument.

“If their partner is important to them, the ‘I’m right’ person needs to take the time to listen and be open to what their partner has to say,” said psychotherapist Carol A. Lambert. “Finding middle ground or agreeing to disagree helps a relationship to thrive while both partners feel worthy of consideration.”

END_OF_DOCUMENT_TOKEN_TO_BE_REPLACED

END_OF_DOCUMENT_TOKEN_TO_BE_REPLACED
We and our partners use cookies on this site to improve our service, perform analytics, personalize advertising, measure advertising performance, and remember website preferences.Ok