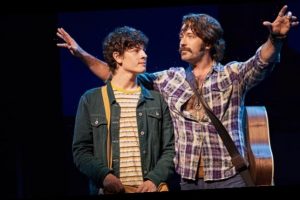 How do you create original music for a stage show about the love of music? It’s a tall order for even the most seasoned theater producer, never mind a first-timer. But Cameron Crowe, as we’ve come to know, is nothing if not courageous. From his earliest magazine work in the 1970s to the era-defining script for “Fast Times at Ridgemont High” to documentaries on Pearl Jam and David Crosby and, yes, his 2000 film “Almost Famous,” Crowe has done a better job of articulating the sensation of sound, lyric and melody than most of his successors in rock criticism — defying the old adage, “writing about music is like dancing about architecture.”

But Broadway is new terrain for Crowe, and while plenty of pop culture’s greatest hits have been turned into jukebox musicals, “Almost Famous” — which opened Friday at the Old Globe Theater in San Diego, following two weeks of previews — is not one of them. Yes, there are interpolations or snippets of more than a dozen existing songs, including Led Zeppelin’s “Ramble On” and “Over the Hills and Far Away,” Cat Stevens’ “The Wind,” Joni Mitchell’s “River” (the singer herself was in attendance on opening night) and, of course, Elton John’s “Tiny Dancer.” But the majority of the music consists of more than 20 original numbers — co-written by Crowe with Tony- and Pulitzer-winning composer/arranger Tom Kitt — peppered throughout the show’s two hours and 45 minutes. The end result? In the hands of Kitt, Crowe (who also wrote the musical’s book) and director Jeremy Herrin, a love letter to music and the concert experience, or, in rock ‘n’ roll parlance, a backstage pass to peek into a world that feels both fantastical and real.

Part memoir, part fiction, “Almost Famous” was an instant multi-generational hit when it was released as a feature film starring Kate Hudson, Billy Crudup and Patrick Fugit. The story of a San Diego teenager aspiring to become a rock journalist in 1973 America, as Crowe did in real life, the movie had a whimsical, comedic tone punctuated by sharp observations on the shallowness of celebrity. At the same time, it was a sweet tale of youth — the years when the most dangerous act for a 15-year-old was to disobey a parent, as protagonist William Miller, played by the endearing Casey Likes in the stage version, did by joining “midlevel band” Stillwater (the script’s words) on tour for his first assignment for Rolling Stone. He meets Penny Lane (pictured below, second from left), who, with her fellow “Band-Aids” on her side, is along for the ride, but not in the way you’d think of a single-and-ready-to-mingle party girl. As her character explains: “We are not groupies. Groupies sleep with rock stars because they want to be near someone famous. We are here because of the music. We inspire the music.” A nuanced distinction but one nonetheless.

Indeed, there are many such declaratory refrains to coach you through the narrative, and also to remind you of its setting in “another time,” as it were, when people fornicated freely, smoked cigarettes, planned out their landline phone calls and did drugs brazenly and proudly. Epithets like the Band-Aids’ no-attachments/no-boundaries mantra and Lester Bangs’ warning to William to be “honest and unmerciful” in his feature article and avoid at all costs becoming friends with the band, circle back with familiar repetition. Played by Rob Colletti, who greeted the night’s attendees before curtains up in a T-shirt that read “Retro Sucks,” the Lester Bangs character delivers one of the script’s classic lines with proper deprecation, telling William: “They make you feel cool. And you are not cool.”

But Penny Lane, the love interest of both William and Russell Hammond, Stillwater’s guitarist and, in an accident of charisma, its de facto frontman (a recurring gag both in the movie and the musical), is the epitome of cool, a role actress Solea Pfeiffer embodied with a laissez faire flair as she sashayed across the stage in Penny’s signature suede coat. A highlight of her performance: the duet “The Night-Time Sky’s Got Nothing on You” sung with Russell, played to Crudup-like perfection by Colin Donnell.

Musically, Penny and William do a lot of the heavy lifting, taking the lead on a dozen combined songs, including their love-torn duet “Morocco,” which reprises later in the show as the two are forced apart at tour’s end — Penny discarded by Russell as his wife reenters the picture, and William defeated as a journalist having turned in a puff piece to the already frustrated editors at Rolling Stone. Also worth noting are solo numbers by Anika Larsen, who plays William’s mother Elaine, another already-ironic character thanks to a stellar performance in the movie by Frances McDormand and a trove of quotable lines — one of which, “Rock stars have kidnapped my son,” is turned into a quirky musical refrain of its own.

Crowe had previously put his words to work as lyrics, sharing the credit to Stillwater’s own Spinal Tap-esque “Fever Dog” with his ex-wife Nancy Wilson (of Heart fame) for the movie. And while he relied on a formula that has come to define his most successful and critically applauded work — the integration of songs, even if they’re just fragments, to set the tone of a story — it’s one that has also evolved. Given the wisdom of time and experience and all the music he’s taken in since his teenage years, Crowe knows what works: songs that are timeless.

“Almost Famous” also has the punchline tropes you’d expect of a Broadway show set in the recent past, including movie-sourced quips like “If you think Mick Jagger will still be out there trying to be a rock star at age 50, then you are sadly mistaken,” and the crack about a machine that takes 18 minutes to send one page over the phone line.

Visually, it makes a lot of a little, employing doors as a frequent prop to set the scene: a backstage dressing room, William’s bedroom, and several hotel suites. Moments in the story set on the band’s tour bus and plane made use of stacked chairs and hydraulics to great effect, as did a dance number that incorporates classic album covers (enlarged to 15-inch squares for those in the cheaper seats, to use the words of John Lennon).

Thematically, there’s a recurring irony in the pressure William feels from his idol Lester Bangs to steer clear of the F word — as in, friendship. Defying that counsel, Crowe has made a career out of the extraordinary relationships he’s forged with everyone from Zeppelin to Pearl Jam to Joni, who in a rare appearance, traveled from Los Angeles to show support for her longtime friend on his big night. But no two stories of fame are the same and that, in a way, is the beauty of “Almost Famous,” which tells a singular tale about an unlikely experience — hopping on the tour bus with a successful band after only a quick meeting and a vague assignment — that feels uniquely real. Which it was, because Crowe lived it, and perfected it by revisiting the memories countless times since.