These are the 5 top air fryers recommended by This Morning 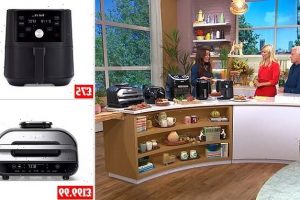 The five BEST air fryers on the market: As it’s revealed they’re are more cost-effective than an oven, This Morning reveals the most popular models – with prices starting from £75

Air fryers are becoming a kitchen must-have after it emerged they are more energy efficient and less costly to run than ovens.

The devices — counter-top machines that cook by rapidly circulating hot air — mimic the effect of deep-fried food with far fewer calories and a fraction of the fat.

Latest machines reduce fat by as much as 80 per cent with the effect that calories are almost halved. Better still research by energy firm Utilita found that ditching an electric cooker in favour of options such as air fryers and slow cookers could help families save money during the cost of living crisis.

Although the gadgets have been around for years, they’ve soared in popularity in the past 12 months. In their annual consumer report published last year, John Lewis revealed that sales of air fryers have increased by 400 per cent.

Today, This Morning expert Georgina Burnett reviewed five of the most popular air fryers on the market, from the popular Ninja option, priced at a costly £199,99 to a much cheaper option by Vortex costing £75. 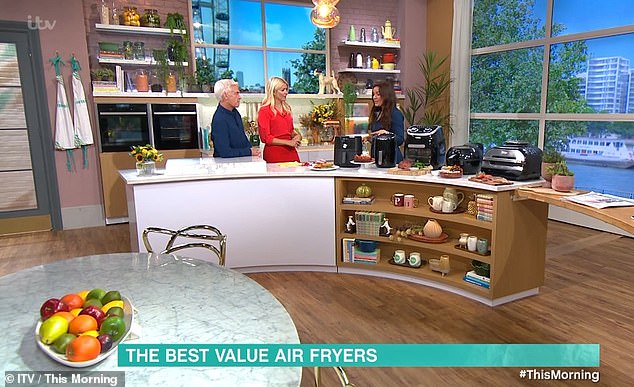 Georgina Burnett talked Phil and Holly through the best-value air fryers on the market, from the popular Ninja option, priced at a costly £199,99 to a much cheaper option by Vortex costing £75 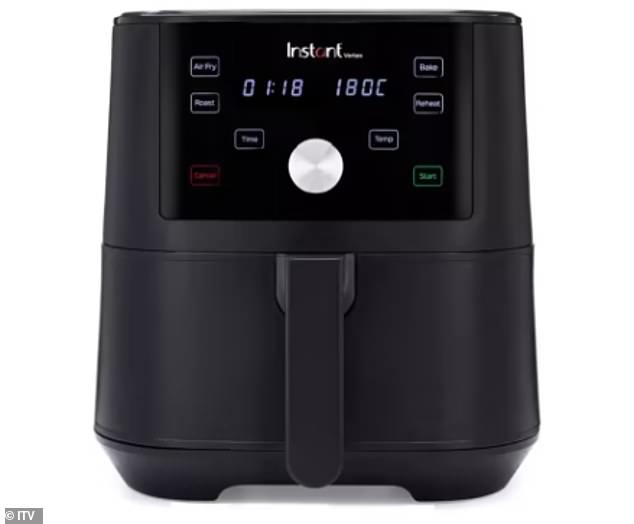 Georgina’s cheapest recommendation was Vortex’s Instant 4 in 1 air fryer, which costs £75, can be used for frying, baking, roasting and reheating.

She said the gadget can be used for frying, baking, roasting and reheating.

She said the thing she particularly liked about this particular fryer was ‘how [the food] comes out,’ saying ‘it feels very fresh.’

She added that the fryer, which can be used to bake cakes and pastries, roast meats and veggies and reheat leftovers, cooked from fresh or frozen.

The fryer has space for 540g of chips or a 900g chicken and can cook 3 to 4 portions in one go, which makes it a good investment for families. 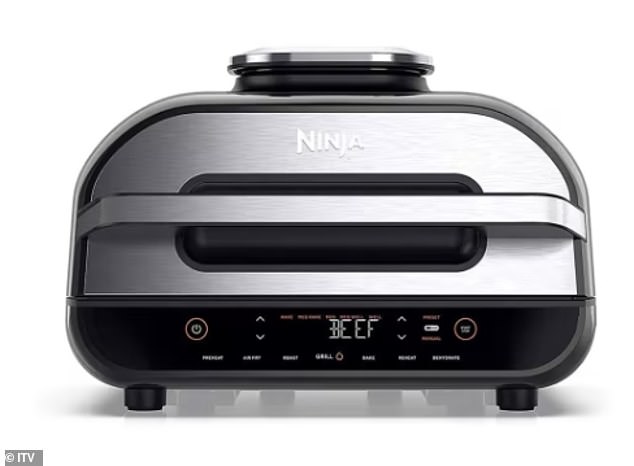 The costliest recommendation was the popular Ninja foodie max health grill and air fryer, which costs £199,99

The costliest recommendation was the popular Ninja foodie max health grill and air fryer, which costs £199,99.

Georgina said that this option is popular with foodies because it looks sleek.

However, she added that, because it measures 42cm, ‘you’re going to need a big kitchen for this one.’

The Ninja air fryer is praised for its big capacity, as its grill can hold six burgers or six chicken breasts at the same time.

It also enjoys a dual comportment for cooking two foods at once, which allows foodies to save on cooking time. 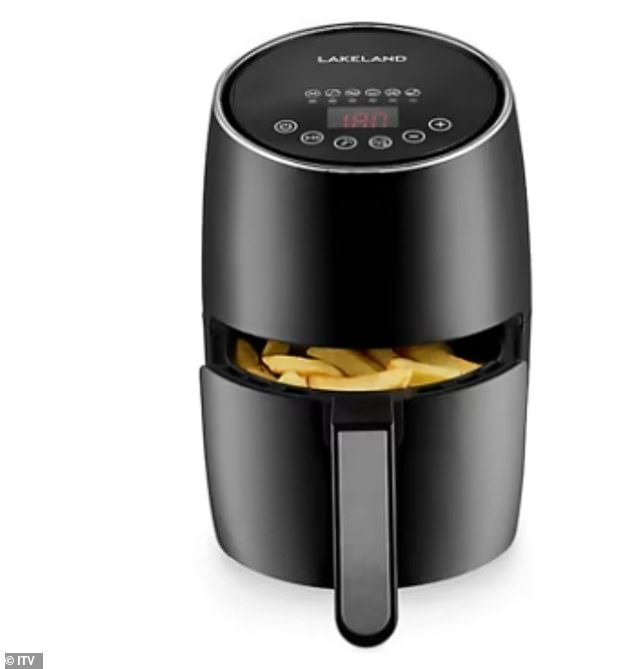 Another good option, according to This Morning, was the Lakeland digital compact air fryer, which costs £79,99

Another good option, according to This Morning, was the Lakeland digital compact air fryer, which costs £79,99.

The show stressed that this small fryer is more compact than others and is ideal for smaller kitchen or small households.

In spite of its small size, the fryer can cook up to 450g of chips and is suitable for sweet potato fries, wedges, scampi or chicken legs.

Its digital LED touchscreen and control panel makes it particularly easy to use.

In spite of its small capacity, This Morning was able to bake a cake in a tin in the fryer. 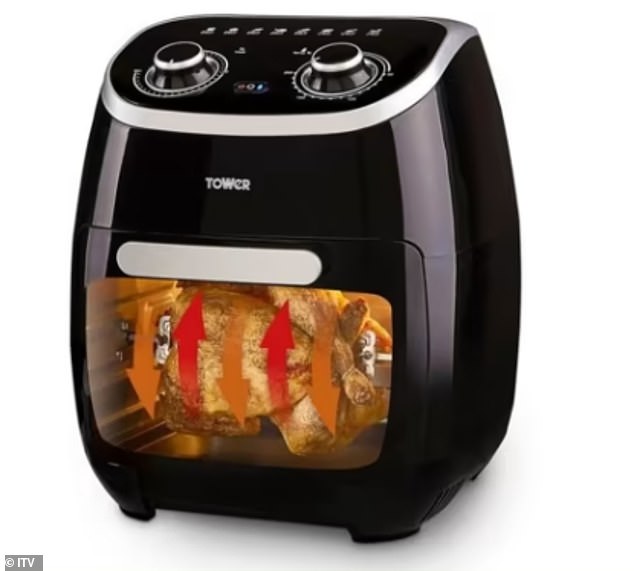 At £110, the Tower T17038 Xpress was the third cheapest fryer in This Morning’s selection. It can cook a 1kh chicken in just 40 minutes

At £110, the Tower T17038 Xpress was the third cheapest fryer in This Morning’s selection.

Costing £90 less than the Ninja fryer, the Tower option enjoys 5-in-1 function, with a 360 degree rotating system, to insure the ingredients are cooked evenly.

Georgina revealed the fryer can cook a 1kg chicken in just 40 minutes.

Packed with extra power, the fryer can also cook 30 per cent faster than a traditional oven.

It was also popular for its 11ltr capacity, which made it great for people with large family or who ‘like to entertain,’ Georgina said.

She added that the Tower appliance can fry 700g of fries in one go. 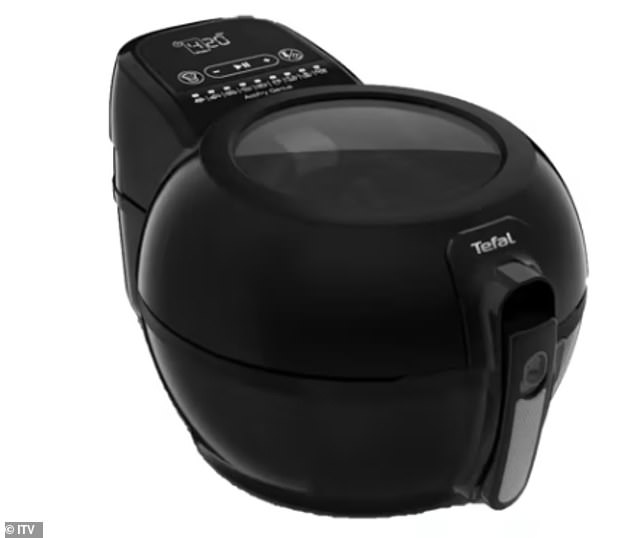 Georgina said that one of the most popular air fryers on the market is Tefal’s Actifry Genius, which costs £150

Georgina said that one of the most popular air fryers on the market is Tefal’s Actifry Genius, which costs £150.

The big plus of this air fryer, Georgina said, is its self-moving panel, which means that it stirs the food automatically, and without a need for a human head to interfere.

However, due to its compact design, the expert warned it is harder to use this particular fryer to roast chicken.

However, she said the appliance is big enough to cook four portions of food at once, and also has two compartments that allows to cook two foods at the same time.

‘You’re not getting as much space in there,’ she said.

She also added that in spite of its smaller size, the Tefal fryer is one of the noisiest of her selection.

Air fryers have been touted as a good way to cut on energy costs this winter, as they use a fraction of the energy of a conventional oven — just 14p a day to run, compared to 87p.

This is because the fryer uses spiral heating element with a powerful fan, which means that it cooks food faster than a regular oven, and requires less electricity to do so.

Data from energy firm Utilita and supermarket Iceland and published by the Daily Mail reveals a standard electric oven costs 87p a day (£317.55 a year) to run, based on average daily usage. However, an air fryer will set you back 14p a day, or £51.10 a year.