We can’t whisk away to Downton Abbey this holiday season, but before the period drama’s long-awaited movie hits theaters next fall, we can start dissecting what we may see at the estate during that visit. Even after releasing a Downton Abbey teaser trailer, the film’s production team has stayed mum about story details, but they’re finally spilling some secrets. These Downton Abbey movie plot details tell us when in the 20th century we’ll reunite with the Crawleys, and it’s sooner than you may think.

When it wrapped in the United States in 2016, Downton Abbey had just welcomed the year 1926. As the Crawley family mingled with their servants at a New Year’s celebration, loyal employees Anna (Joanne Froggatt) and Bates (Brendan Coyle) basked in the glow of new parenthood, having just delivered their son. Although the long-suffering Bateses were the most deserving of a happy ending, they weren’t alone in their high emotions. Frequently unfortunate Edith (Laura Carmichael) finally made it all the way down the aisle to marry a well-to-do man, and Mary (Michelle Dockery) had settled into life with her second husband Henry (Matthew Goode). Thomas (Rob James-Collier) was about to explore working life outside of Downton, while beloved butler Carson (Jim Carter) retired to live out his days with Crawley housekeeper and wife Mrs. Hughes (Phyllis Logan).

When a Downton Abbey movie became official this summer, fans were most curious about how much time would pass between the series finale and the film within the Downton universe. The six-season drama captured more than a decade’s worth of stories, but if there was anything the show didn’t really excel at, it was showing the characters aging and recognizing how much time had actually passed. If the film followed suit, it wouldn’t have been surprising, but according to Entertainment Weekly, the movie picks up about 18 months after the finale, taking us to the autumn of 1927.

Including four first look photos from the film in its coverage, EW has broken down its major plot points, albeit vaguely. Mary, who learned she was pregnant with her and Henry’s first child in the finale, has taken a more managerial role in the running of Downton. Dockery told EW: 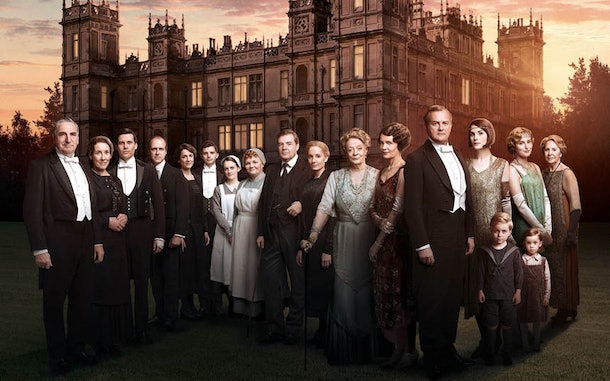 Edith’s marriage soon led to her outranking her own family, but when she returns to Downton in the film, she’s happy in her elite but modern life with husband Bertie (Harry Hadden-Paton) and daughter Marigold. Once the Crawley chauffeur before marrying the now-deceased Sybil, Tom Branson (Allen Leech) still runs an automobile business with Henry, and after several of his false starts at new romance in the series, the movie could include Tom finally finding love again. Leech hinted, "Given the fact that he is one of the only ones left who hasn’t found love, one would hope and assume there is an opportunity for him to have an iota of a chance at finding something."

The cast and crew remain tight-lipped about what specific event calls forward all of the characters, but whatever it is, Carson could find himself back in his black suit and white gloves. Engler teased that when this alluded conflict happens, Carson is "called into service and he becomes part of the success of the story.” Based on this, it’s safe to assume that the Crawleys and their servants won’t let anything else destroy their happiness at Downton. After all, the Dowager Countess simply wouldn’t approve if resistance wasn’t the case.