There’s still more than a week to go until the eighth and final season of Game of Thrones premieres on HBO, but it’s officially OK for fans to start celebrating the epic drama’s return. The network held a red carpet premiere in New York City to kick off the final countdown to the start of the new season, and these photos from the Game of Thrones Season 8 premiere are as fierce as Daenerys’ dragons. The series’ final battle will determine who is worthy of the Iron Throne, but if that choice was reliant on the cast’s fashion sense, this would be an even trickier conflict to resolve.

Bringing together current and former Game of Thrones stars, the New York premiere at Radio City Music Hall was every Thronie’s dream come true. Representing their still living characters, Kit Harington, Emilia Clarke, Sophie Turner, and more appeared alongside past co-stars like Sean Bean, Rose Leslie, and Pedro Pascal, whose onscreen personas have already met their ends. Excuse me while I imagine a universe where everyone is still living and has made peace with each other.

The heartfelt cast reunion emphasized just how special this final season will be. Like any proud parent, whoever was running the Game of Thrones Twitter account didn’t hold back from sharing pics of the actors in their red carpet finery. Gearing up for the ultimate war, the characters are likely destined for an entire season of mostly wearing armor, so why not glam up when you have the chance?

If you’ve been watching the series from its humble beginnings, you’ve probably watched the glamorous transformations of Maisie Williams (Arya Stark) and Sophie Turner (Sansa Stark) IRL. After growing up onscreen, the real-life best friends recently explored their history together in a Rolling Stone feature, and it looks like they decided to collaborate once more with their fairly similar premiere looks. Long live the House of Stark, indeed! 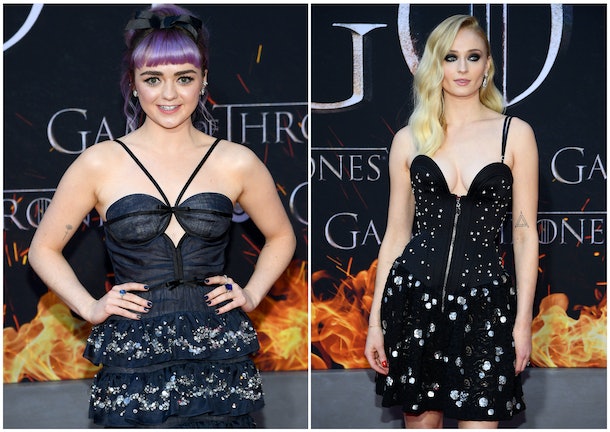 Game of Thrones also sparked off-screen romance for actors Kit Harington and Rose Leslie. Leslie appeared as Ygritte, the lover of Harington’s Jon Snow, for several seasons before the character was killed. She and Harington began dating in 2012 before getting married in 2018. Fans can certainly take their premiere coziness as a sign that Jon Snow may know a little something after all. 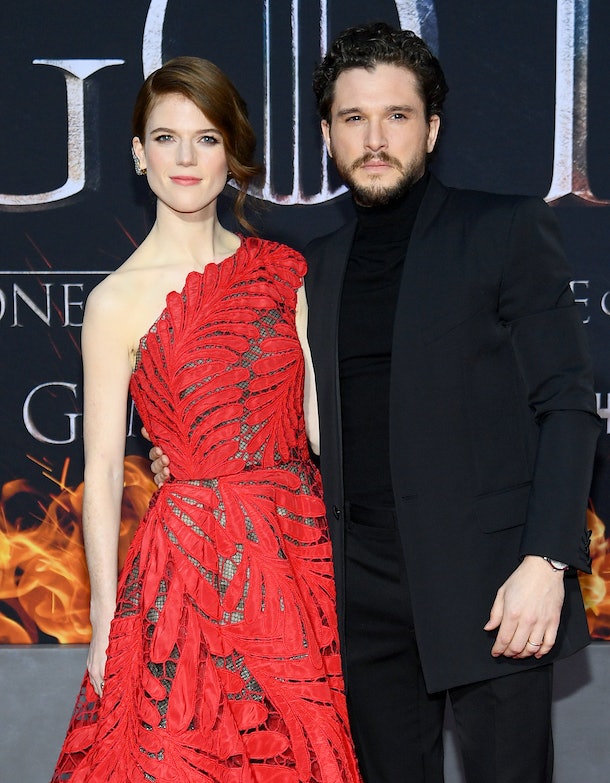 Leslie also caught up with Emilia Clarke (Daenerys Targaryen) at the premiere, and Clarke rocked the red carpet with a look melding both fire and ice. While she took a darker approach to her makeup, her Valentino dress was an icy blue, and its bust portion included the cryptic message, "Leave your door open for me. I might sleepwalk into your arms." The suspicious text may mean that a much-hyped Season 8 theory is true, but kudos to Clarke for embracing her Targaryen colors. 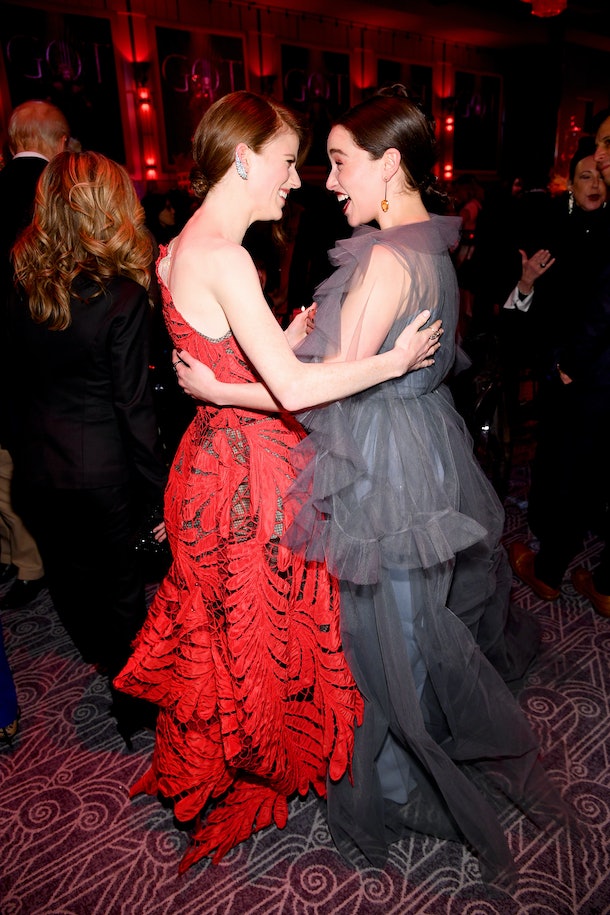 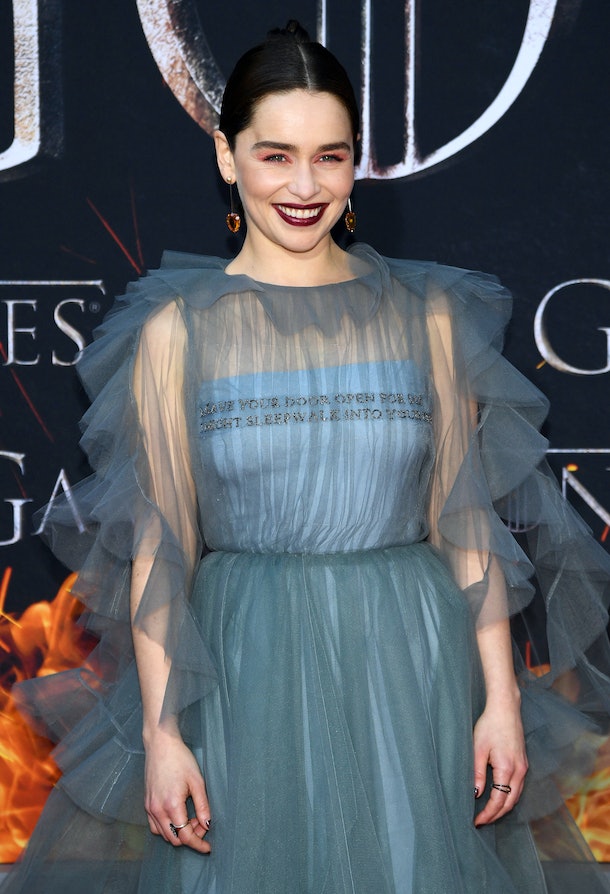 Also at the premiere, Game of Thrones author George R.R. Martin walked the carpet, while Gwendoline Christie (Brienne of Tarth) embraced her inner queen with a surreal Iris van Herpen gown. Look at that sleeve action! 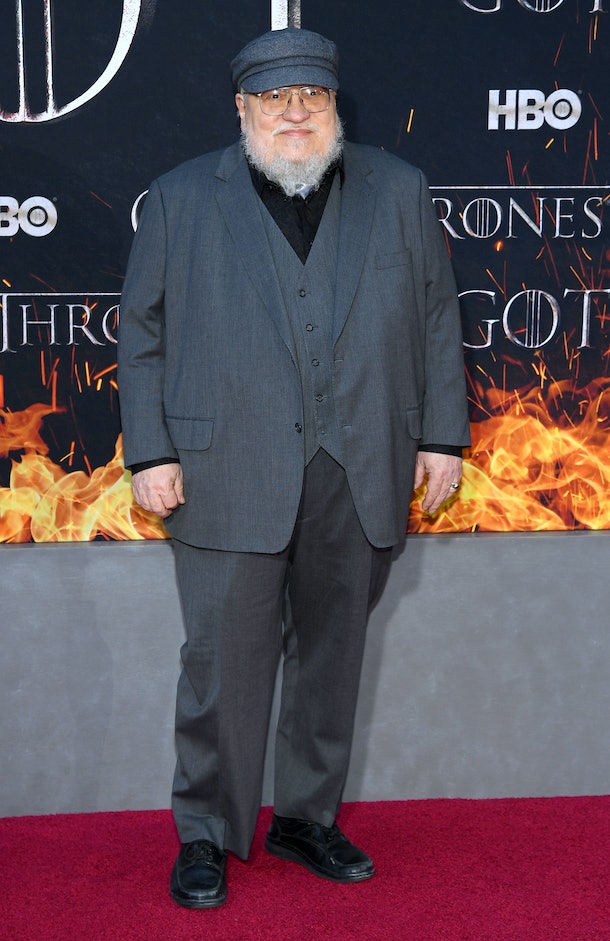 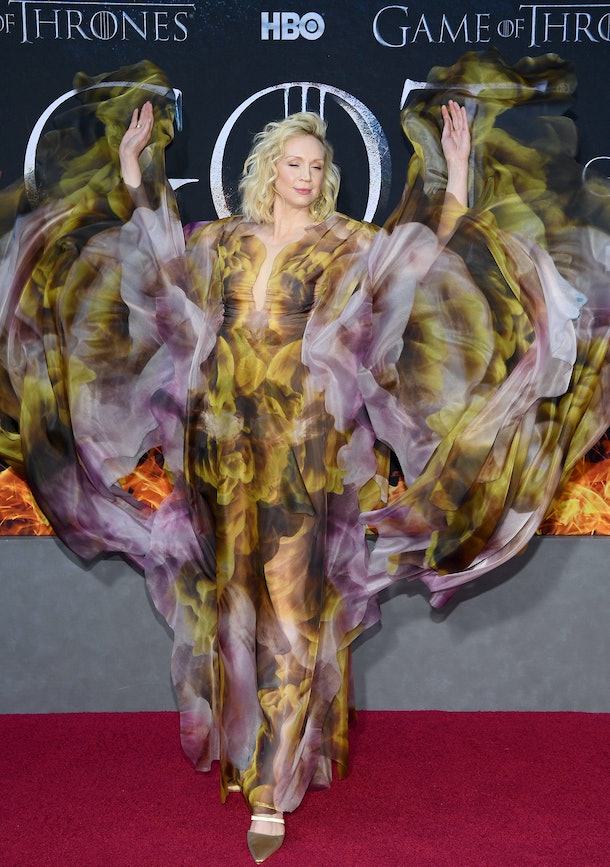 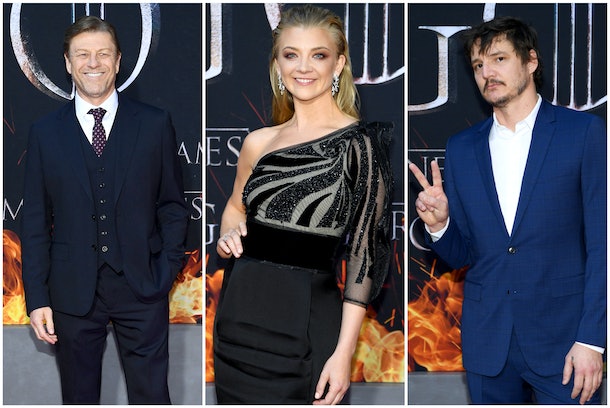 Of course, there were plenty other actors from the series’ present and past at the premiere, and everyone looked as top-notch as you’d expect. As a full lineup of attendees found here shows, Peter Dinklage, Nikolaj Coster-Waldau, Alfie Allen, Jack Gleeson, Jason Momoa, Indira Varma, and more were there to commemorate the special occasion. 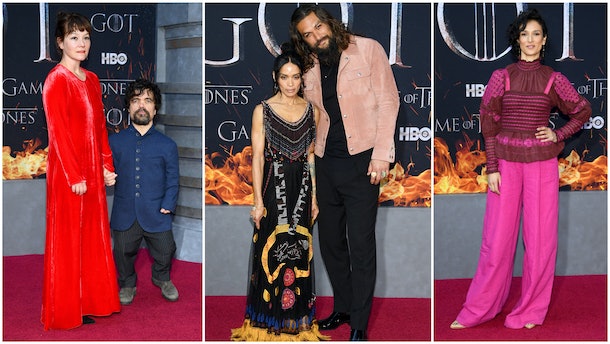 As star-studded as the premiere was, one notable absence was Lena Headey, who plays Cersei Lannister. Headey confirmed on Instagram that she was ill and unable to attend the premiere. In a post expressing her disappointment, Headey praised Season 8 and her co-stars and crew, writing in all caps, "Ride forth into the night and create mayhem."

While it wasn’t a complete cast reunion, Game of Thrones and HBO totally pulled off an epic celebration of the upcoming finale. Congrats on reaching this milestone, Game of Thrones!

Season 8 of Game of Thrones premieres on Sunday, April 14, on HBO.

END_OF_DOCUMENT_TOKEN_TO_BE_REPLACED

END_OF_DOCUMENT_TOKEN_TO_BE_REPLACED
We and our partners use cookies on this site to improve our service, perform analytics, personalize advertising, measure advertising performance, and remember website preferences.Ok