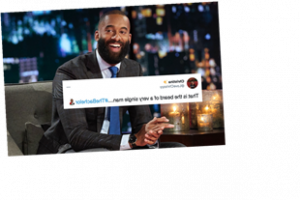 While every season of The Bachelor is dramatic in its own right (that’s kinda the point), Season 25 has definitely been one for the books. Between queens fighting over crowns, self-eliminations, and a Bachelor who had never been part of the franchise before, there have been *plenty* of ups and downs. Whether you were here for all the on-screen drama or you were low-key over it, it seems like there’s one thing most fans can agree on: The Bachelor’s new ~lewk~ is a lot. These tweets about Matt James’ beard on the "Women Tell All" episode makes that much clear.

Heading into The Bachelor, it was clear Matt had all the trappings of a great lead, despite never having previously been on a Bachelor franchise show before. He was single, hot, and successful in both his career and his philanthropic endeavors. And even though some fans might not have known Matt for as long — or as intimately — as they knew past leads, most of them quickly warmed up to his good humor and, yes, his handsome face.

That’s why fans were shook when Matt showed up to the March 1 "Women Tell All" episode looking very different. After being clean-shaven all season, the Bachelor arrived to the special with a rather, um, full beard, and fans have *thoughts.*

Most people like to change things up after parting romantic ways, so maybe growing a beard made sense for the lead after going through filming. Whether it was for cathartic or sad reasons, many fans felt like his new facial hair indicated he’s not in a relationship anymore.