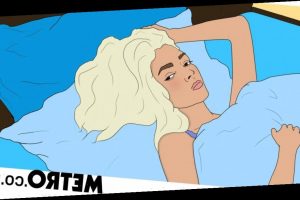 The other day while carrying a bag of shopping back home, a bottle top brushed against my nipple.

For a moment, my imagination transported me away from the chaotic and bustling street in South London on which I stood to somewhere more exciting, thrilling even, before I swiftly crashed back to reality.

Then I realised something — and no, it wasn’t that I had a newfound fetish for milk bottles — but that this was the longest I’d ever gone without sexual contact.

When the coronavirus pandemic began to register in the country’s consciousness in early March this year, sex wasn’t really on my mind.

Acute anxiety and sexual arousal are not really comfortable bedfellows, and I was far more concerned with surviving lockdown with my physical and mental health intact. Like many people, I felt deeply fearful about what lay ahead and the abject suffering coming down the line.

In the ensuing weeks my head and body were awash with strong (and sometimes strange) emotions. Fear? Yep. Sadness? Yeah. Boredom? A bit. Loneliness? Yes. Impatience? Sure. Frustration? Hell yes.

But arousal? No, I didn’t feel any of that. The pandemic is a lot of things, but ‘sexy’ isn’t one of them.

In fact, I was grateful for my body’s compliance. As a single person that lives alone, sex was expressly off the table — indefinitely.

But after a few weeks we all started getting used to this new normal. We fell into a new rhythm. We settled into our lockdown routines. Life felt safer again.

And then, bam! The lockdown horn hit… and it hit hard. I’ll spare you the details, but just about every single person I know was thirsting in chorus; a Spring Awakening of sorts. The apps were suddenly alive with single people hungry for connection. And the descent into sex talk was, well… rapid.

There was a big problem with all of this though. None of us could actually do anything about it. And who knows how long for?

Collectively we’ve been asked to follow rules and respect authority in a way many of us haven’t since we left home. For single people, or those living alone or away from partners there is now a clear ‘no sex’ rule — unless, of course, it’s with yourself.

For the first time since many of us were teenagers, rather than following our desire to its natural, logical conclusion, we must instead sit with it patiently for an indeterminate amount of time while trying not to scream.

In my case, though, this is not an exclusively bad thing. Because like many others, since my teenage years the experience of sex has often been the rushed conclusion of attraction, rather than something to be savoured and built up to.

Back then, this was fuelled by a desire to cross the finish line into adulthood by becoming sexually active; now, I suppose, it is just habit.

In the unrelenting merry-go-round of adult life, work, sex and relationships, we don’t often stop to think much about our patterns of behaviour. But now I realise how often I’ve rushed through important bond-building parts of a relationship towards intimacy, scared, I think, that if I put on the breaks, my partner would lose interest.

It’s also made me realise how little I consider my own desire in these scenarios. Like many other women, it’s taken me a long time to unlearn the toxic yet pervasive narrative that men have desire and that women are there to serve it.

But dating in lockdown has allowed me to re-evaluate my relationship with sex, and to place getting to know people ahead of physical intimacy. I’ve realised that sex as a concept isn’t just about the act; it’s about the whole experience, from first attraction to physical intimacy.

Last week on a socially-distanced date, the man in question’s fingers accidentally brushed my knuckles when we moved in the wrong direction. The sensation of his touch made my every limb ache with anticipation and every single hair on my body stand on-end, one-by-one – like a little Mexican wave of yearning. It felt like magic.

I don’t know when I’ll have sex again, or even touch another person intentionally rather than by accident. So far, the government has failed to give us any clarity on that. But I do know that over the past few months, the goal posts of my sexual desire have shifted enormously.

And I now consider desire as a sensation in its own right to relish, rather than a temporary state experienced en route to a defined destination or goal (read: orgasm).

It feels much like I’m experiencing it all again for the first time – like it did when I was a teenager, but this time without the social pressure of having to do anything with it.

My desire is mine, and only mine, maybe for the first time… ever? It finally belongs to me. It has returned home.

For now, I’ve made peace with feeling arousal, without a need to act on it. I suspect this will all evaporate at record speed as soon as the rules change.

But I hope that I can cling onto some of the lessons this period has taught me about my sexuality and its importance as I move forwards in my romantic life.