In the opening moments of Recipes for Love and Murder, a gentle new murder mystery series from Acorn TV, a woman emerges from a farmhouse holding a live chicken and picks up an axe. Thwack. Squawk.

But the only thing that has been massacred is a watermelon – a snack for the chicken, who pecks at it as Tannie Maria, the show’s heroine, played by Irish actress Maria Doyle Kennedy, prepares an ostrich mince pie to take into the office. (Yes, ostrich.)

It is a clue to the tone of the series, set in the Karoo (pronounced Ka-ROO), the vast, sparsely populated territory in the southern part of the country that is home to some of South Africa’s most austerely beautiful terrain. Tannie Maria (Afrikaans for Auntie Maria) is a 50-something resident of the fictional town of Eden, a picture-perfect spot where the butcher shop is painted pink, the cashiers at the supermarket know everyone’s business and the police deal with errant sheep. 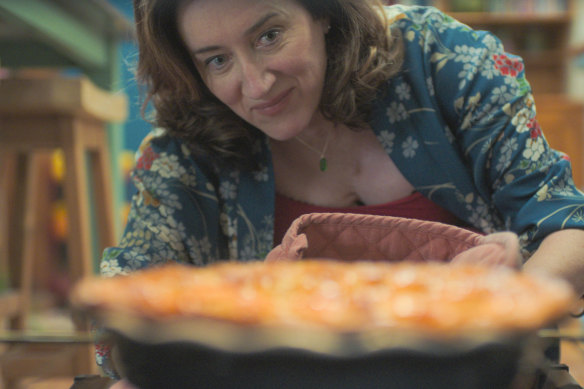 Irish actress Maria Doyle Kennedy is a food columnist Tannie Maria who stumbles upon a murder in the South African-set murder mystery Recipes for Love and Murder.Credit:Acorn TV

Recipes is based on the first of the Tannie Maria books by Sally Andrew. And the TV series offers the same mix of human drama, gorgeous landscape, local colour and mouthwatering cooking, quietly threaded through with the more serious issues of domestic abuse, racial inequality and the legacies of apartheid.

But there is much that differs from the books, starting with the identity of Tannie Maria, who in the novels is South African. In the TV series, she has a South African mother and a Scottish father, and grew up in Scotland before moving to a house in the Karoo, inherited from an aunt.

“I know there are people who are disappointed that we didn’t use a South African actress,” said Karen Jeynes, who wrote the script, during a recent conversation at a seafront coffee spot here. “But for the show to exist we had to make an appeal to an international audience.” The rest of the cast and crew, she added, is entirely South African.

Jeynes, who is also the head writer at the production company Both Worlds Pictures in Cape Town, said she and the company’s director, Thierry Cassuto, had been looking for South African books to adapt when they came across Andrew’s novels. “There were just so many interesting elements,” she said. “Food, the Karoo landscape, a small-town social microcosm. And did I say food?”

What stood out for Christiaan Olwagen, who directed six of the episodes (Jeynes directed the others), “was the idea of a small town where people flee their pasts. They come from elsewhere and form this motley community where secrets are embedded.” The Karoo, he said, is a tourist destination in South Africa. “I wanted to pull an audience in with an almost pastel, postcard prettiness, so that everyone and everything looks delicious, but with something dark and dangerous underneath.” He added: “It’s The Killing meets Chocolat.”

In a Zoom interview from Dublin, Doyle Kennedy (Downton Abbey, Outlander) said she loved the script so much when she first read it that she persuaded her husband to film her “putting stuff in the oven, breaking up herbs, trying to look like I am a fantastic cook”, and then sent the footage as part of her audition tape.

“I had read so much material that was violent, with so many serial killers and the many ways they dispose of women, that it was starting to make me angry,” she said. “Here was something tender and warm, with very funny, even comedic setups. But with darkness, too; it wasn’t trivial.”

At the start of Recipes, Maria is writing a cooking column for the local newspaper, whose staff comprises the smartly suited editor, Hattie (Jennifer Steyn), and an ambitious young reporter, Jessie (Kylie Fisher). When the paper is forced to change its recipe column to an advice column, Maria volunteers to take it on, incorporating her recipes into her responses. Her first letter is from Martine Burger (Tinarie van Wyk Loots), a woman who is being abused by her husband; despite placating him with Maria’s lamb curry recipe, Martine is found dead soon after.

“I had read so much material that was violent, with so many serial killers … that it was starting to make me angry,”

Enter the handsome, taciturn chief of police, Khaya Meyer (Tony Kgoroge), another outsider, as a black man from Johannesburg, who has come to work in a region where the population is predominantly white and coloured (the apartheid-era racial classification for people of mixed heritage that is a distinct identity and still widely used in South Africa).

Playing a black man in a position of authority, Kgoroge said, was a way for the series to suggest the racial tensions that still exist in South Africa without belabouring the point. “The reality of what we go through in South Africa, for people from different groups, is that we still experience elements of segregation and exclusion,” he said. “We are still patterned in that way.”

The most explicit articulation of racial inequalities and prejudices in the show comes from Jessie, who is coloured, and writes about the lives of domestic workers and the injustices of farm labour practices while dutifully covering the local church fete and social gatherings. When Jessie’s simmering romance with Regardt (Arno Greeff), a white policeman, seems to founder, her teenage sister grimly reminds her of the racial prejudices of a small town. (The series was filmed partly in the real Karoo town of Prince Albert.)

“I loved that Jessie is an empowered coloured character, well-read and intelligent,” said Fisher, who earned her drama degree on the first day of lockdown in 2020. “To me, the show held a mirror to South Africa – how much we have and haven’t changed. As hard as we try in our individual capacities, we can’t ignore that these problems exist. But what the series shows is that human problems are human problems, regardless of race.”

Jessie and Maria begin to investigate Martine’s murder (to the predictable annoyance of Khaya, the police chief, who is clearly drawn, despite himself, to Maria). When a second murder victim is found (Lawrence, a black gardener), the women, together with the newspaper’s editor, Hattie, dig their heels in further. They go to talk to Lawrence’s mother, Grace (Lee Duru), a domestic worker who suspects her son saw something on the night of Martine’s murder.

“In the character description of Grace, there was the word ‘gravitas’, which speaks to dignity and respect,” Duru said, “not words usually associated with a domestic worker. And her story speaks to any mother’s feelings, the love a parent has for your child.”

The unfolding of the relationships between people of different races and from widely varied walks of life is “full of delicacy and truth”, said Steyn, who plays Hattie. “These women are so different, but they are a sisterhood.”

Despite the murders and simmering racial undertones, the show keeps its warm, humorous tone through the quiet, grounded character of Maria, with her empathetic, practical advice (and recipes) in response to the letters she receives. (The letter writers speak directly into the camera, describing their problems as we see their lives.)

The mix of characters and nuanced relationships in the small town “perhaps show a South Africa that many people haven’t really seen before”, Greeff said. “It’s not an African country, struggling. It’s quirky, fun and engaging.”

Doyle Kennedy said she loved the way “Maria approaches everything – being an agony aunt, solving a murder – through food.” She added: “It’s a language for her, the way she communicates, how she slows time down in order to process thought and feeling. She licks the countertop of Martine’s kitchen, she thinks about what was in her shopping basket. It’s Miss Marple crossed with Julia Child.”

Fictional amateur sleuths are a dime a dozen, Olwagen remarked. “But there is something very alluring about someone’s superpower being food.”

This article originally appeared in The New York Times.

Recipes for Love and Murder is on Acorn TV now.