This ‘The Flash’ Villain Has Returned & I Have SO Many Questions

Major spoilers ahead for The Flash Season 5, Episode 8, "What’s Past Is Prologue." Well, that was certainly… a lot. When news broke that The Flash‘s 100th episode was going to focus on time travel, fans braced for a lot of confusing timeline alterations and twists jam-packed into one hour. But no one could have expected or predicted what actually happened. "What’s Past Is Prologue" brought back every major Flash villain so far, and then went so far as making Eobard Thawne (Tom Cavanagh) the person that Barry Allen’s daughter Nora (Jessica Parker Kennedy) has been working with this whole time in the present. Talk about the ultimate betrayal: working with the man who killed your grandma and made your dad’s life a living hell!

So much went down in the big episode, but to quickly recap: Nora has been sending coded messages/daily reports to Eobard Thawne in 2049. This version of Eobard Thawne is a lot older than who we’ve seen in the past and present, and he’s locked up in Iron Heights and has been working with Nora this whole time. But she didn’t know everything he had done to her family in the past until she and Barry time-traveled to key points in Team Flash’s history to assemble a weapon to defeat Cicada (Chris Klein) in the present. 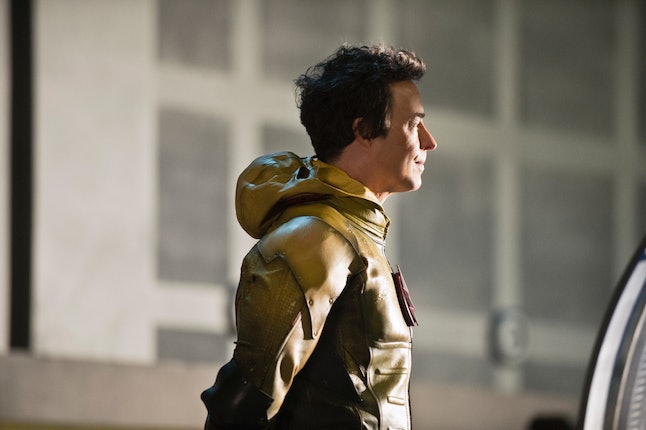 The weapon ultimately failed, but Team Flash did learn that because Caitlin (Danielle Panabaker) isn’t a metahuman caused by dark matter, she’s impervious to his power dampening abilities. That’s a big win for Team Flash going forward in their fight against Cicada. Plus, Barry and Nora might have accidentally altered the timeline with their time travel, so who knows what’s going to change after this episode. And don’t even get us started on all the Easter eggs that the past version of Thawne dropped when Barry and Nora were forced to get his help in the past or the big Arrow-verse crossover scene at the very end of the episode. There was so. Much. Information!

But what The Flash stars love most about the episode is the big Nora/Thawne reveal. "I’ve loved all season the Nora and Barry dynamic and finding out her story," Grant Gustin tells Bustle. "Barry knows nothing right now, obviously, about what’s going on potentially with Nora and Eobard Thawne. Anything that involves Eobard Thawne, I’m excited to see how it plays out because that’s one of my favorite characters and Tom is brilliant. I mean, Nora is I think quite honestly going to be a good guy and truly our daughter and on our side, but I think it’s more complicated than that."

Whenever Barry and Iris (Candice Patton) eventually find out about Nora’s betrayal, it’s going to cause some major waves in their happy little time-traveling family. 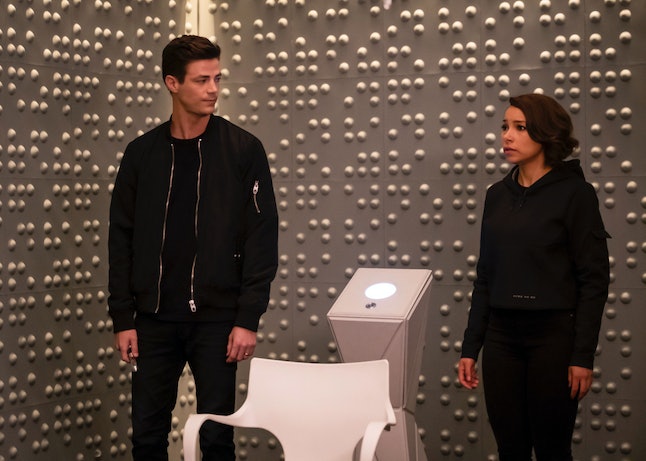 "This is the midway point that is setting up the rest of the season and everything that everyone has to look forward to," Patton tells Bustle. "I don’t know [how Iris is going to react to finding out that Nora is working with Thawne]. We’re not there yet, actually. That hasn’t been revealed to Iris and I’m sure when it is revealed, it will be interesting to see how it changes their dynamic and how mother and daughter handle that."

Kennedy was really into how ambiguous of an ending the episode has with Nora. "The Eobard Thawne stuff leaves you with this feeling of like, is Nora good? What’s going on there?" Kennedy tells Bustle. "It’s a dynamic in terms of who the man has been in her life because her father wasn’t there and Eobard Thawne has been there for her in some capacity but we don’t know what capacity that is yet. It’s something that I’m really excited for the fans to witness and either enjoy or hate. We’ll see!"

Fans won’t have to wait long to find out more about Nora’s agenda and what the future Thawne is up to in 2049. Executive producer Todd Helbing reveals that Episode 10, the one after the big "Elseworlds" crossover, is all about their mysterious relationship. "We pick up where we left off in 8 in Episode 10 so you don’t have to wait around forever," he promises. 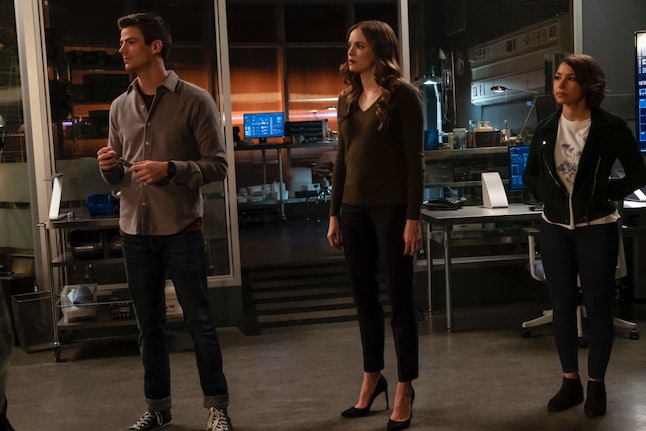 Carlos Valdes was relieved that the writers didn’t hold off on getting to the heart of the Nora/Thawne relationship. "Our writers have been really good about laying out the breadcrumbs for the big over arching mystery that shrouds the season," he says. "There’s a big mystery, there’s some sort of weird relationship afoot that with every episode, fans will get an opportunity to start piecing it together. I’m excited to watch how fans piece it together and what their theories are and if any of them actually get it right."

As for whether or not Thawne is going to take over as the big bad of this season (instead of Cicada like fans previously thought), Helbing just smiles. "You have to tune in to find out," he says before breaking out in laughter when I give him an exasperated look. "No, I think there is a little baton passing."

Cavanagh adds, "I can’t really give it away. I better not. In terms of the 100th, clearly you see that 2049 Iron Heights moment, you know something is coming. That’s not just a throwaway moment. But Cicada, I will say, is a villain we have to reckon with." 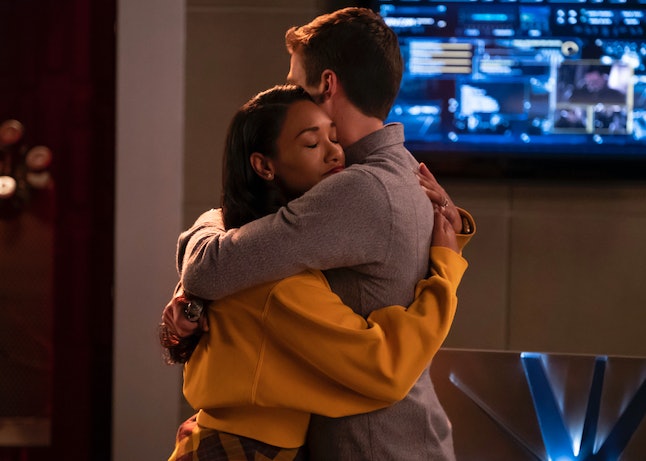 And here’s when things get a little more confusing. After watching the episode twice, I came to what I thought was an obvious conclusion: that Sherloque Wells (also Cavanagh) in the present is actually the present version of Thawne pretending to be another Wells doppelganger, tricking Team Flash into trusting him while he tried to figure out what Nora was up to (not knowing the future version of himself would be working with her 30 years later). Confused yet? Get ready to be even more confused: according to Helbing, Sherloque is *not* Thawne, despite Sherloque saying the exact same line that future Thawne says.

"Oh, Sherloque is not Thawne. No," Helbing says, laughing at my shocked expression (I was so sure I was right!). "He’s just another doppelganger of Harrison Wells. It was the callback line, right? ‘Clever girl?’ Yeah, no. You’ll see later. All I’ll say is that he has his own agenda."

As for that coded speed language Nora has been writing her reports to future Thawne in? "The timeline is malleable" is a pretty big clue as to what she’s planning with Thawne. "Cisco’s computer figured out one line," Helbing explains. "And Sherloque is going to start figuring out what the rest of the time language means." 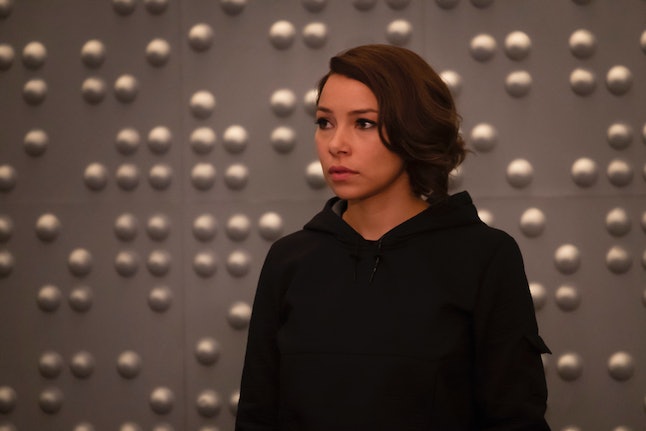 So the showrunner of The Flash says point blank that Sherloque is not Thawne. That’s cleared up, right? Wrong. Cavanagh seems to directly contradict that statement when talking about bringing Thawne back for the 100th episode.

"The nice thing is there is a less is more ethos with it to Eobard Thawne," he says. "Eobard Thawne is the supervillain, the arch enemy. It’s hard to imagine a series finale where it’s not the kid in red and me in yellow facing off. So given that that’s probably the dramatic conclusion to our series at some point, you don’t want to overspend when you’re halfway through or three quarters of the way through. Because it was our 100th, let’s bring out the artillery." 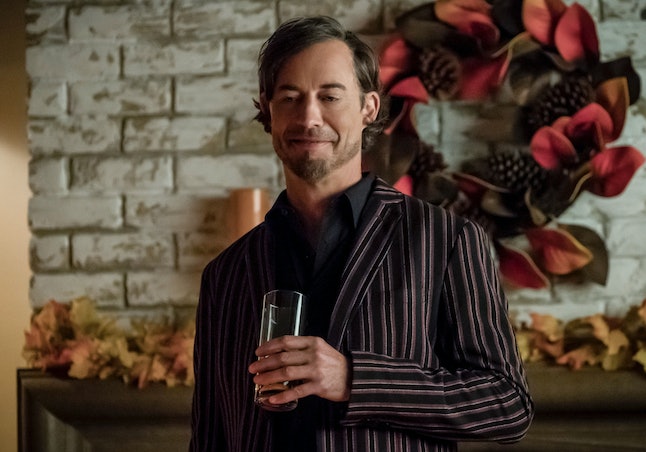 So, according to Cavanagh, he played four versions of Eobard in the 100th, which adds up to mean that Sherloque really is Thawne. Gah! Who is telling the truth? We’re not getting clear answers now, but Cavanagh does promise that "Sherloque is not going anywhere," so expect to see him a lot moving forward.

"Sherloque, I love him… but yes, I always knew that it was never going to be Sherloque on his own," he says of coming back as a new character this season. "I don’t think I would continue forth with this show without having Thawne in the back pocket, you know what I mean? That’s the reason that I signed on to this show and it’s always a highlight for me, an incredible privilege to play a comic book icon."

But is he playing that comic book icon in the present or just the past and future?! My brain hurts.