Everyone knows that Buzz Lightyear is all about that "infinity and beyond" life, so, of course Tim Allen thinks there should be more Toy Story sequels. While the beloved Disney-Pixar animated film’s newest installment, Toy Story 4, doesn’t hit theaters until June 21, the actor who’s voiced the plastic Space Ranger superhero since 1995 has even played around with the possibility of a Toy Story 5 over a recent "guys’ lunch" with Tom Hanks, AKA the man behind the beloved cowboy sheriff Woody. They may have a slight difference in opinion, however when it comes to whether or not it will actually happen.

"Tom doesn’t think so," Allen told Entertainment Tonight in an interview on Wednesday, Feb. 6. "We said this has been 20 years of he and I doing this, and I said, yeah, it’s made an impact on both of our lives and our family’s lives. I think it’s like Harry Potter … Once you’ve gotten to four, you’re passed that trilogy, so I don’t see any reason why they wouldn’t do it, certainly. If you ask me, I’d say do five."

His comments surely will come as a relief to nostalgic fans, who, for months, have assumed Buzz and Woody’s time together would end with Toy Story 4. Allen may or may not have even started the hysteria when he confessed on CBS’ The Talk in September that he "couldn’t even get through the last scene." 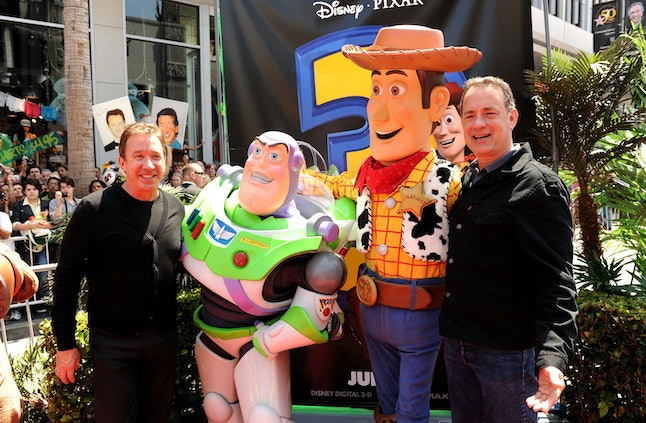 While the franchise’s future — as well as either actor’s continued involvement — remain uncertain Allen is laser-focused on delighting fans with their newest collaboration. As has been revealed in various Toy Story 4 promos and teasers, the come-to-life action figures will hit the road and reunite with Woody’s onetime love Bo Peep (Annie Potts), who hasn’t appeared in any of the films since 1999’s Toy Story 2, per ET.

From the sounds of it, an old flame may just reignite onscreen in the new movie, too. "It’s a love story between Tom and his love interest," the Last Man Standing actor added to ET at Fox’s Winter Television Critics Association gala in Los Angeles. "Then Buzz has to make a decision on how to move on with his life cause Woody’s making some different decisions… It’s so funny and so bright and so interesting and so affecting, towards the end."

That emotion also carried over to both actors as they recorded their respective parts at a final group session, said Allen: "We were both very very affected by the end of the movie. So much so that he had turn around. He couldn’t even deliver his end of it, I couldn’t deliver my end of it."

Hanks even documented the moment in a Jan. 30 Instagram post. "Final line, final session as Woody of Toy Story 4," he wrote in a caption, along with a photo taken in the studio. "We rode like the wind, to infinity and beyond. Hanx."

Unless Allen is just playing with fans’ emotions, his latest comments provide plenty of hope that there may just be more toy stories to tell in the future.