On the set of Tim Burton’s Dumbo in the fall of 2017, none of the cast can stop talking about how adorable the main character is, even though the elephant is decidedly not in the room. The remake of the 1941 film is almost a completely new story, but the star is the same good ol’ Dumbo. While being interviewed by a group of reporters at Pinewood Studios outside of London, actors Colin Farrell, Danny DeVito, and Joseph Gatt promise the assembled reporters this live-action Dumbo keeps the themes and message of the original, classic Disney animated film, while also adding in a new story for a modern audience as well.

The 1941 Dumbo is just 64 minutes long, shorter than the average episode of prestige Sunday night television, and told from the baby elephant’s perspective with very little dialogue. This new Dumbo, out March 29 and penned by screenwriter Ehren Kruger, has a new narrative for the new human characters. "[Kruger]’s done such an amazing job at taking all of the best stuff from the original movie and then expanding it and putting in all these incredible human characters," says Gatt, who plays Neils Skellig, "and it’s still — it’s all about Dumbo."

Burton’s film takes place in 1919 when Holt Farrier, played by Farrell, returns to his home in a traveling circus after losing his arm and his wife during the Great War. His horses have been sold, his children have lost their mother, and he’s lost he’s lost his partner both in his act and in life. When the circus acquires the pregnant Mrs. Jumbo to make money, and discovers the baby has a magical secret, Dumbo ends up saving the family as much as they save him. 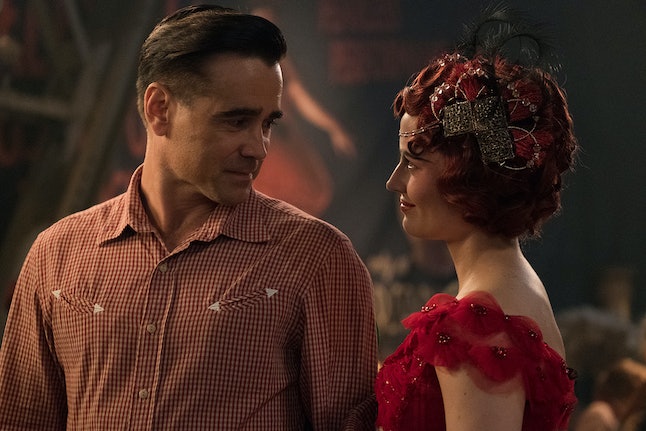 "Life is sort of broad strokes dotted with moments of specificity," says Farrell, somehow managing to both wax philosophical and mumble at the same time. "Tim is really good at figuring out the balancing act of honoring the sweetness of the original story, or the intent, or the kind of allegorical element of what a baby flying elephant represents, with real world emotional concerns of families and friendships and damages in war," he adds.

The actor came to the film cold, having not really grown up with Dumbo as a child. "Jungle Book and Lady and the Tramp were the two [Disney] films that I kind of remembered being incredibly affected by," he says, but when he read Kruger’s screenplay, "I thought it was lovely. Just sweet to its core," he says.

It’s the theme, Farrell says, that keeps the best parts of Dumbo intact. "The one essential thing that holds true to the original cartoon and this is the flying elephant; and the idea of believing in yourself, finding something inside you that allows you to become the best version of what you never thought you could even be, and that we’re all, regardless of the things that society sometimes says should arrive us at being outcasts," he says. "They are the things that make us all individual and special and beautiful regardless of how crippling a certain thing may be, how polarizing a certain physical attribute may be." 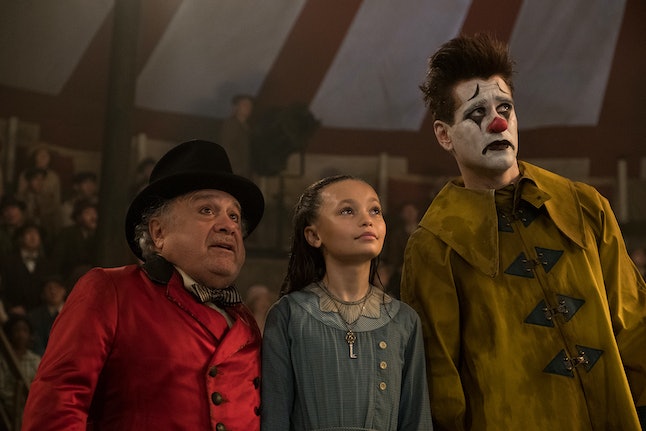 "When I was a kid, watching Dumbo, very emotional," says DeVito, who plays circus barker Max Medici in the film. "I didn’t see it as much as I did [as an adult]. I have three kids, you know, so I started with them as early as I could, 30 years ago 33 years ago looking at Dumbo over and over again. So I have a long history with it."

He cites some minor changes in this film, like how Dumbo gets his name, or the fact that his character is not being fed ideas by a mouse named Timothy. DeVito enthusiastically mimes a special effect involving an elephant in hay that he found charming. Again, everyone involved just seems taken by the titular character.

Even Gatt, who plays a villainous henchman, says "it was very difficult imagining cute Dumbo there and me being really mean. But that’s just what we do. It’s our jobs. Then you laugh about it when Tim yells ‘cut,’ and then you do it again!"

He describes his character as Darth Vader, but the actor himself can’t stop gushing about his character’s adorable nemesis. "Most people see Dumbo as this cute, big-eared pachyderm, and he has these big eyes, and the lashes," he says, before admitting that Skellig would "see him as something that would look nice on my wall, perhaps, or maybe a new jacket, perhaps. Something along those lines. So we don’t really see eye to eye, [Skellig] and Dumbo."

In the animated 1941 Dumbo, the talented elephant needed to believe in himself in order to fly. It seems that Tim Burton’s take on Dumbo applies that lesson to all of the characters. "Never give up," muses DeVito, when asked what the film is about to him.

Sure, there are more human characters than there are in the original, and they’re dealing with some pretty heavy stuff, but as Farrell says to us, "You put a flying elephant in there and it really can’t be anything but fantastical, you know what I mean?" If there’s a way to be both grounded and up in the air, Tim Burton’s Dumbo has found it.