Home » Lifestyle » Tom Hanks, on portraying Mister Rogers, says he too works on being kind

Tom Hanks, on portraying Mister Rogers, says he too works on being kind

Much like Fred Rogers, the childhood legend who Tom Hanks portrays in the new movie “A Beautiful Day in the Neighborhood,” Hanks himself said he too works hard at being kind to others.

“I try to give everybody a fair shake,” Hanks told “Nightline.”

Hanks said he knows his work has made him familiar to generations of people, and that when he is meeting someone for the first time, he keeps that in mind. He pointed to his own childhood experience of running into a celebrity as an example.

“When I was a kid, I once carried Cher’s bags as a bellman at a hotel, and I could not believe that I was in the same universe with Cher,” he said.

Hanks said he grew up understanding that kindness was a choice.

“Kindness is a proactive act,” he said. “Being kind is a choice that you can make absolutely every single day.” 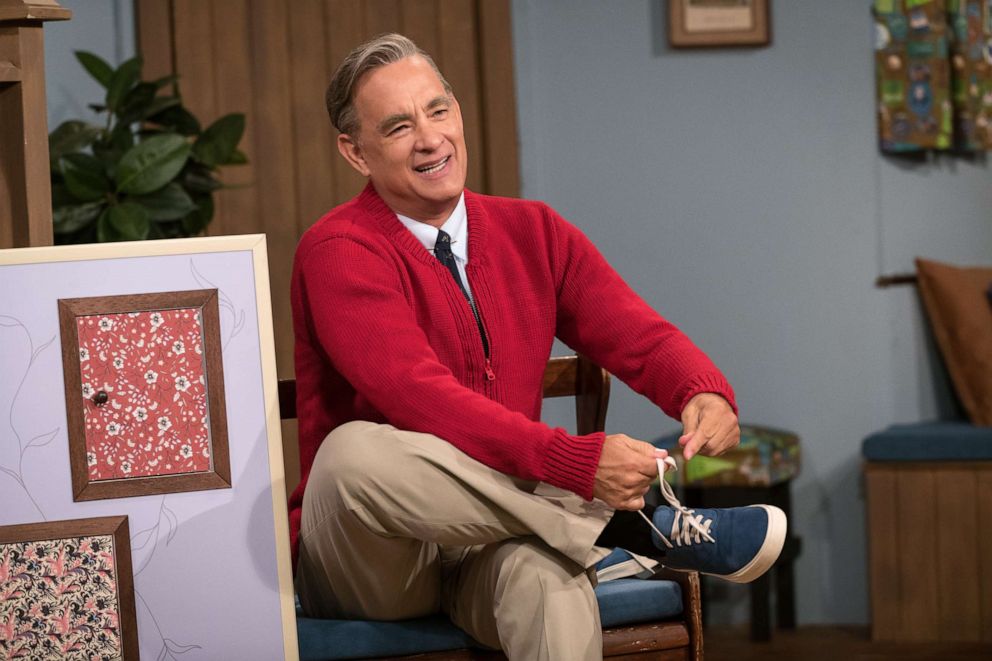 For 33 years, Mister Rogers welcomed everyone into his neighborhood. Every episode of his beloved children’s program began with a greeting and a warm smile. He would take off his blazer, don a sweater and tie his sneakers.

It was a repetition both comforting and mesmerizing to millions of families, and he continues to be one of the most cherished figures of all time.

Now, Hanks is putting on that cardigan to recreate Mr. Rogers for the new movie, “A Beautiful Day in the Neighborhood.”

She said if her husband, who died in 2003, could have seen himself being portrayed by Hanks, “he might have been speechless.” 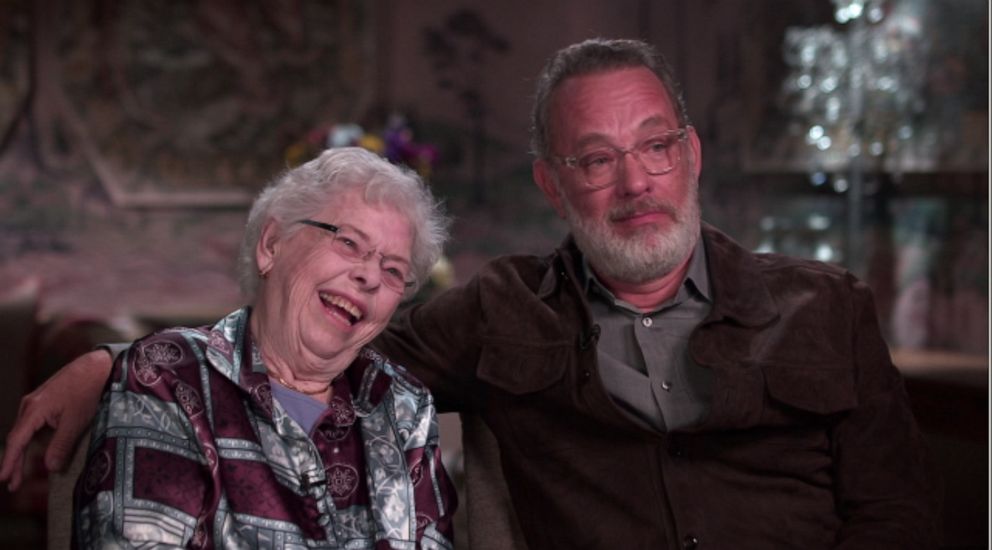 The movie explores Fred Rogers’ radical kindness, acceptance and forgiveness. It’s told through the eyes of a jaded magazine journalist named Lloyd Vogel, played by actor Matthew Rhys. It also explores the unexpected ways in which Mister Rogers helped Vogel reconcile his own troubled past and fraught family relationships.

The movie is loosely based on the true story of the real-life friendship between Rogers and a jaded magazine journalist named Tom Junod.

Junod was tasked with writing a profile on Rogers in 1998. At the time, Junod was controversially known for his sensational article outing Kevin Spacey’s sexuality. He went into his interview with Rogers with skepticism, looking for a dark side of the beloved children’s icon.

“I didn’t know that this had happened but his people had told him not to talk to me,” Junod told “Nightline.” “I was doing a lot of really, really dark stories at the time, and Fred decided to talk to me. And from the moment I met him, he gave me that.”

What Junod discovered was that Rogers was a complex, yet genuinely kind, person who had a profound impact on the people he touched — including Junod.

“He had this intuitive understanding of what people needed in that moment at the moment when he met them,” Junod said. “I know that in my case, I…was doubting myself and really not thinking of myself as trustworthy and Fred trusted me.”

Born in 1928 in Latrobe, Pennsylvania, Rogers was an ordained minister who also studied child development at the University of Pittsburgh.

In 1968, he developed “Mister Rogers’ Neighborhood,” a half-hour-long children’s program that ran on WQED and later aired across the country thanks to the birth of public television. 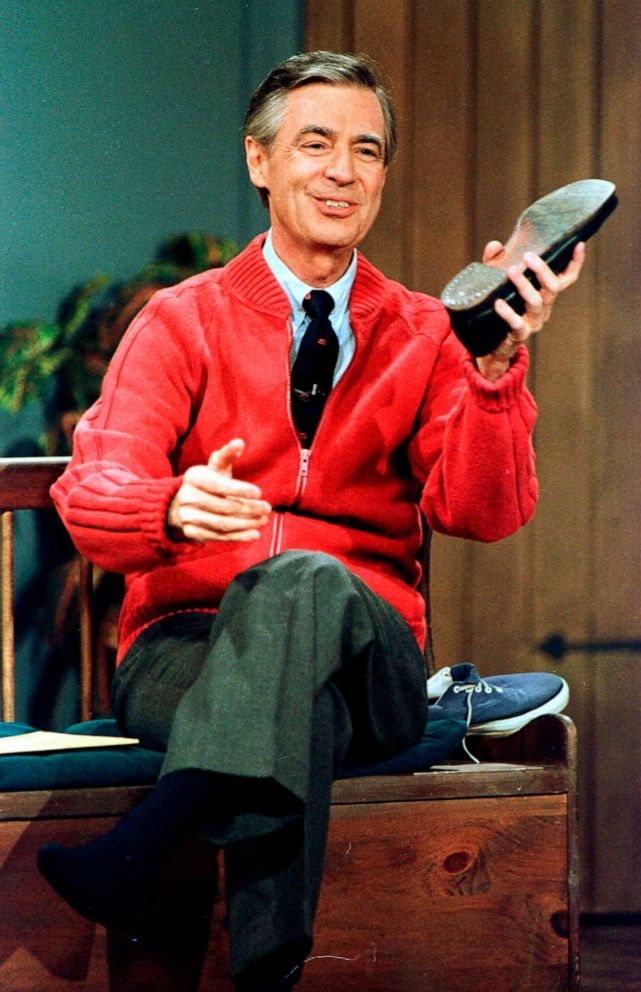 For a long time, Rogers was the only grown-up on television who spoke directly to children, providing answers to hard questions surrounding pain, bullying, anger, sadness and fear.

An episode that Hanks said he would classify as “award-winning” was an episode in which Rogers talked about losing his dog when he was young and how he dealt with death.

“He says, ‘I was really sad for a while…that…’part of being alive is to be sad,'” Hanks said.

Rogers lived by example. In the 1960s, he took a stand against racial inequality when he invited Officer Clemmons to dip his feet in Rogers’ plastic pool. At the time, many swimming pools across the country wouldn’t admit black people. Rogers reminded us that kindness transcends race.

In the midst of today’s divisive, hate-filled times, Junod said Rogers’ message would be the same as it always was.

“I think Fred would keep on saying what Fred always said,” Junod said. “When he said, ‘You are special,’ he’s not just saying, ‘Well, you, who I like, is special.’ He is saying everyone is.”

Rogers’ TV program ran for 895 episodes before its end in 2001. Rogers died two years later from stomach cancer at the age of 74.

“One of his greatest words was ‘us.'” Rhys said. “His inclusion of everyone was incredible. There is no ‘them.’ There’s no division. There’s no line in the sand. There’s only us. So all we have to do is work together.”

Yet, for all the goodness Rogers radiated on screen, his wife said it did not come easy for him. The movie delves into the ways in which Mr. Rogers dealt with his own anger.

His wife said she believes her husband was “imperfectly human.”

“What we have to remember is Fred was a minister, first and foremost. And the program was his ministry. It just was,” said Joanne Rogers.

Joanne Rogers said their marriage, like every good union, had its moments of frustrations.

“I would come in just talking about having a hard time at the car dealership, or…getting the cars maintained,” she said. “He would say, ‘Well, you just don’t know what that man was dealing with, you know? You just don’t.'”

“That response is not Marriage Therapy 101,” Hanks joked. “I don’t think that’s the thing a husband should do coming home.” 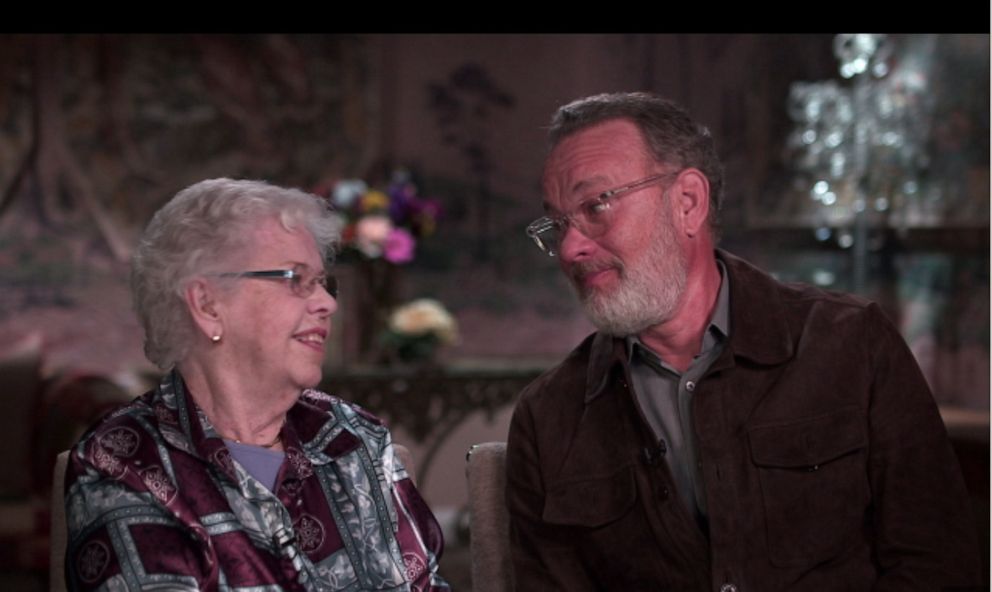 Hanks initially passed on the role, but jumped at the chance to work with director Marielle Heller, who is best known for writing and directing the movie, “The Diary of a Teenage Girl.”

“I think there are very few actors for whom we feel the same kind of warmth as we do Tom Hanks,” Heller said. “[Fred and Tom] are very different people but there’s something about how we feel about them that feels similar. So there are very few people who could play this part; at this point, I can’t imagine anybody else who could have played this part.”

When asked how he channeled his inner Mister Rogers to prepare for the role, Hanks joked, “By sheer terror.” 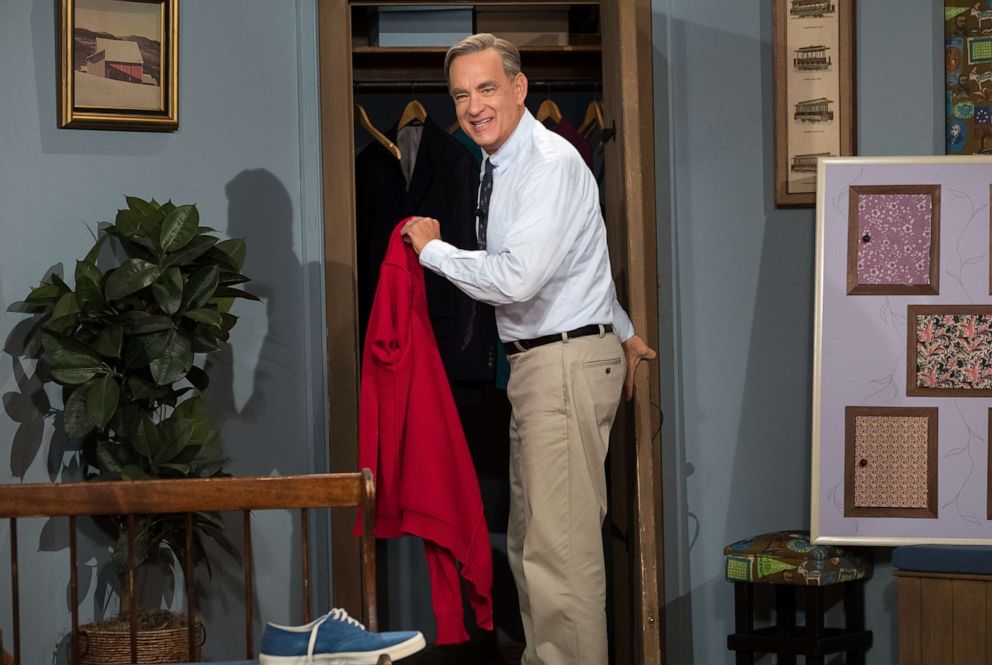 “You start off in the most obvious ways possible, I think, which is a physical version of it,” he said. “[Marielle Heller] really wanted me to stand a certain way, and I wanted to slow down.”

Hanks said having to slow down is the exact opposite of what movie-making normally requires, so it was a challenge for him.

As for “A Beautiful Day in the Neighborhood,” Hanks and Joanne Rogers said they just hope people enjoy it.

“I hope that they will come out of ‘A Beautiful Day in the Neighborhood,'” Hanks said, “and say, ‘Wow, wasn’t expecting that. And, oddly enough, I feel a little better.'”