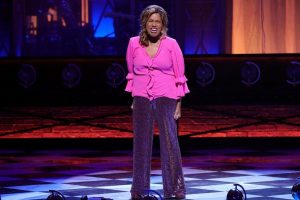 After 27 months, the Tony Awards returned on Sunday night to honor Broadway’s best. The ceremony served as an emotional ode to the power of live theater, as well as an elaborately produced advertisement to get audiences back to the Great White Way.

Split between streaming and live TV, viewers at home were treated to galvanic performances (hello, Jennifer Holliday!) and moving speeches. Still, there’s plenty that cameras didn’t capture at the Winter Garden Theater in Manhattan.  Here’s everything you didn’t see during the four-hour telecast.

A plea to wear masks

Broadway’s back, as audiences were reminded every few steps, and that meant pandemic-era safety protocols were in full force. Everyone at the venue had to be fully vaccinated in order to step foot in the theater, and anyone who walked the red carpet had to show proof of a negative COVID-19 test taken no more than 48 hours in advance.

Prior to the start of the show, producers had a simple request — don’t take your mask off. Winners were instructed to keep their masks on their face until getting on stage. For the night’s losers, it may have even been a welcome obligation. It meant that any reaction shots — the good and the bad — were concealed by a functional stretch of fabric. It also made it difficult to recognize old friends and do much celebrity gazing, though stars like Jesse Tyler Ferguson, with his shock of red hair, remained easy to spot.

Tony hopefuls or not, everyone in the crowd was handed Tony-themed masks upon arrival. However, the slender cloth covering wasn’t made with the dimensions of an adult human head in mind, so many in the crowd opted to wear the masks they brought from home.

Later on, Leslie Odom Jr., who hosted the “Broadway Is Back” concert on CBS in the second part of the evening, reiterated the need to mask up. During his opening number, he sang, “Everyone here is masked, vaxxed and tested, and this is what theaters will look like for a while.”

Lin-Manuel Miranda leads the first of many standing ovations

“Hamilton” mastermind Lin-Manuel Miranda was first out of his chair after cast members from the original cast of “Hairspray,” including Marissa Jaret Winokur and Matthew Morrison, kicked off the telecast with a rousing rendition of “You Can’t Stop the Beat.” It was the beginning of many (and we mean many) moments that had everyone on their feet. One thing was clear: Tony voters and nominees were more than eager to be back in the theater, as evidenced by the near constant standing ovations.

For the first award of the night, which went to David Alan Grier (“A Soldier’s Play”) for featured actor in a play, the applause in the room was so loud, it was nearly impossible to hear the nominees being read before the envelope was even opened. The cheers rose to a crescendo when Grier told the losers in his category, “tough bananas.” Another emotional moment came when Danny Burstein finally took home a statue after his seventh nomination. Before the “Moulin Rouge” actor even reached the stage, the audience leapt up and broke into applause.

Later in the evening, André De Shields, who won a Tony in 2019 for “Hadestown,” was greeted with a standing ovation for simply walking on stage to present. (As he should be!) Hours into the night, the standing O’s didn’t waver, and it only intensified with the concert that brought out Broadway legends like Idina Menzel, Kristin Chenoweth, Audra McDonald (who hosted the first portion of the show) and Titus Burgess. Speaking of icons….

The first two hours of the telecast went by quickly (no, seriously) because it was streaming on Paramount Plus, meaning there weren’t any commercial breaks to interrupt the flow of trophies. After a few touching musical performances and a slew of speeches — many that served as impassioned pleas to increase diversity and prioritize inclusion in the theater industry — Jennifer Holliday, who won a Tony in 1982 for “Dreamgirls,” had the rafters shaking with an emotionally-charged, near-religious performance of “And I’m Telling You I’m Not Going.” It’s hard to convey how powerful the performance played in the room, but mid-way through the ballad, the misty-eyed audience couldn’t be contained any longer. Everyone in the 1,526-seat theater rose from their seats and didn’t return until Holliday exited the stage.

Aaron Tveit won a Tony, but to the amusement of the crowd, his only competition was himself

In an unconventional year at an unconventional ceremony, at least everyone could appreciate the humor in Aaron Tveit’s, well, unconventional Tony win. As the leading man in “Moulin Rouge: The Musical,” the Broadway darling won his first Tony in an unusual way. For the first time, there was only one nominee for best performance by an actor in a leading role in a musical. But just because Tveit was the sole nominee didn’t mean his win was preordained. No, presenters Bebe Neuwirth and Courtney B. Vance assured everyone that he needed support from 60% of Tony voters to win. Cue laughter from the crowd. Of course, Tveit’s name was called and for a moment, it seemed like he would make a joke about the peculiar circumstances. Instead, he took the stage in a teary-eyed speech about the power that Broadway has to change lives.

A mad dash to the bar

In what may be a first for award shows in the modern era, the first portion of the Tonys ended 10 minutes ahead of schedule. Guests needed no invitation to rush to the only bar in the venue, which was located on the Mezzanine level, to refuel before the “Broadway Is Back” concert. Since there was only one watering hole to serve the entire throng of theater lovers, it’s safe to say many people left the bar area without a cocktail in hand.

Those who made their way to grab a drink upstairs weren’t given a warning before the second portion of the evening started. With minutes to spare, ushers told people seated in the orchestra that they couldn’t return to their seats until after Odom made his live entrance because it required him to dance through the aisles. That explains why Titus Burgess snuck into his seat late, which Odom gently ribbed him for.

For whatever reason (money, probably; health concerns, possibly), the Tonys offered pre-taped performances from “Moulin Rouge,” “Jagged Little Pill” and “Tina” — the three shows that were nominated for best musical. For viewers at home, it likely made the experience better because the numbers were executed in fully staged spaces. However, live at the Winter Garden Theater, the energy couldn’t escape the room fast enough. After stirring performances by Ali Stroker, John Legend and more, a room full of Broadway mavens were hardly impressed by the pre-taped numbers.

An epic series of duets played to dwindling crowds

In a finale that would have any theater kid gagging, Odom and his wife Nicolette Robinson initiated a series of legendary duets with “You Matter to Me” from “Waitress,” into Titus Burgess and Andrew Rannells singing “It Takes Two,” and the original “Wicked” stars Menzel and Chenoweth reuniting for an especially emotional rendition of “For Good.” From there, Adam Pascal and Anthony Rapp kept the energy going with “What You Own” from “Rent” before Brian Stokes Mitchell and McDonald capped off the evening with “Wheels of a Dream” from “Ragtime.” There was nary a dry eye in the crowd — at least, among those who were still in their chairs. At that point in the night, all of the awards had been handed out and dozens of seats had emptied out by the time Freestyle Love Supreme took the stage to recap the four-hour ceremony in four minutes. That’s showbiz, baby!