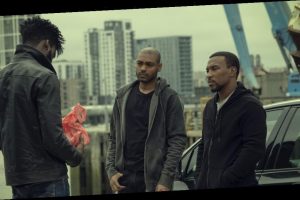 Cameras are rolling on Netflix’s second season of Top Boy.

“We’re obviously shotting Top Boy,” he says from a dreary looking London trailer park. “You asked for it, we gave it to you.” Kano then flips the camera and adds: “There you go, Season 2. Netflix. Let’s go.”

Top Boy was originally due to film in the spring, but was delayed — along with countless other shows — by the coronavirus production shutdown.

The gritty urban drama is created and written by Ronan Bennett, with Cowboy Films producing. The second season is actually the fourth season, given the show first launched on Channel 4 in 2011.

END_OF_DOCUMENT_TOKEN_TO_BE_REPLACED

END_OF_DOCUMENT_TOKEN_TO_BE_REPLACED
We and our partners use cookies on this site to improve our service, perform analytics, personalize advertising, measure advertising performance, and remember website preferences.Ok