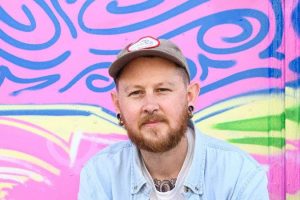 If you wanted to make a series of short films on a sci-fi theme with a sprawling cast of actors, numerous locations (some intergalactic) and huge numbers of ducks, in the normal run of events that would take a vast, most likely prohibitive, budget. But emerging Melbourne filmmaker Mike Greaney had a trick up his sleeve – animation. 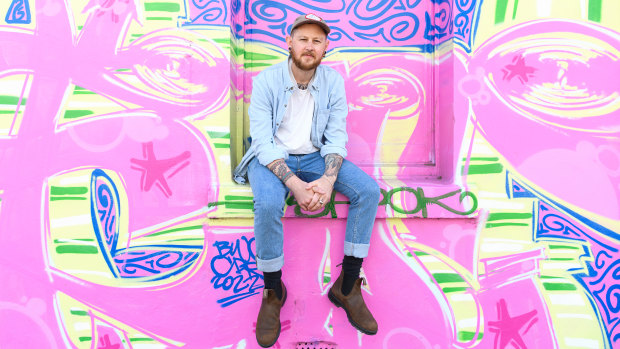 Add to that a dazzling array of Australian talent providing the voices – Tony Armstrong, Celia Pacquola, Sammy J, Geraldine Hickey, Luke McGregor, Luke Heggie, Vidya Rajan and Nath Valvo – and you can see why Greaney’s series, The Future of Everything, is already creating a buzz on YouTube.

“It’s a beautiful thing about animation, that you can really go enormous in scope,” says Greaney, who studied animation at RMIT. “You can write with anything in mind. You’re not limited by having to film things in the real world. It meant that I could write scripts with big complex silly ideas and dozens and dozens of locations.”

The result is a grab-bag of five-minute episodes which offer an absurdist take on contemporary culture and politics. How absurd? One story is about a man determined to pick a fist-fight with God. In another the government funds a resort designed to encourage tourism from other planets.

The first instalment, Unlimited Ducks, which premiered in competition at Austin Film Festival and Adelaide Film Festival, where it was nominated for Best Digital Series and Best Short respectively, posits Internet-radicalised ducks at war with socialist seagulls.

Threading the series together is a quizzical yet profound narration by the late Uncle Jack Charles, in one of his last roles.

Greaney enthuses about the roster of talent providing voices, attributing it to the impressive contacts of the series’ AACTA-nominated producers Nicholas Colla and Nicolette Minster, who head LateNite Films.

“They’ve both worked pretty extensively in comedy,” he says. “They knew so many wonderful comedians and people in the comedy world. We recorded around the time of this year’s comedy festival so the conversation was who would fit these characters we’ve got. Nicola would say we could talk to Geraldine Hickey, or it would be amazing if we could get Luke McGregor to play God; that would be a funny contrast to Luke Heggie’s aggressive character.”

Then they reached the point of figuring out who to approach to be the narrator. “We had all our scripts locked,” Greaney says. “I sat down with Nick and Nicolette and we were just talking about who the voice of the show should be – the narrator is such a central part. We were all really aware that we needed somebody who had a lot of gravity in their voice, but also a cheeky quality, a bit of levity as well.

“Nick said imagine if we could get Uncle Jack, how amazing would that be. We all had a bit of a laugh but I assumed it was impossible. But Nick did a bit of hustling and managed to get in contact with him and he was really, really keen.

“Our record day with him was such a special experience. I’d talk through an episode with him and we’d be laughing at the stupid ideas. He just got in the booth with his wonderful gravelly perfect voice and every line was completely usable. The process was a wonderful back-and-forth. We’d say oh, OK, let’s try this now, and he’d just knock it out of the park. Between recording each episode he’d come out, we’d sit around, have a bit of a break and a cuppa and he was just telling us stories; about his life in the industry, his role in the community. 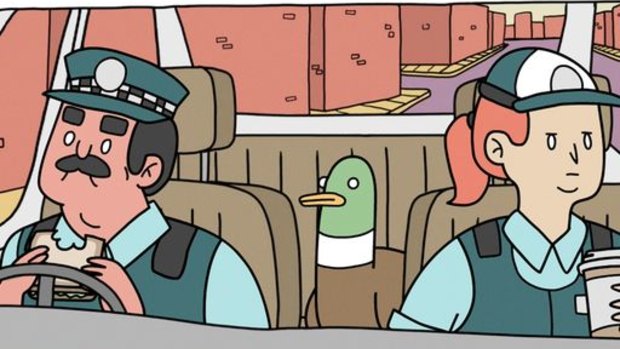 Mike Greaney has imagined a world with unlimited ducks.

“I’d been slightly nervous about the record day with Uncle Jack because he’s such a pillar of the acting community in Australia, but from the moment he arrived he put us all perfectly at ease and was such a wonderful generous presence. It was a magic day.”

The series got principal production funding from Screen Australia and support from VicScreen. Greaney was already able to boast an established online audience, thanks to the comics and animations he’d been posting online, particularly during the COVID lockdowns.

“I’d post one or two comics a week, because I had lots of free time!” Greaney says. “Slowly by posting comics on Instagram and cross-posting on Reddit, which has a vibrant comic-making community, I started building a following. Each comic would be 10 panels and there’d be a “To be continued” at the end of each post. It created this sense of the community. People would say, cool, I can’t wait to see what happens next.”

That sense of anticipation is matched in Greaney’s plans for The Future of Everything. One avenue he’d like to explore is expanding the series into longer episodes. Working with top comedians has demonstrated how workshopping scripts can take ideas in new directions.

“Luke Heggie and Luke McGregor were great playing off each other (in the second episode, A Tougher Power). We had them both in the booth together and McGregor said, ‘Do you want me to riff on this a little bit?’ He was coming up with jokes on the fly and they were playing off each other. That episode required a bit of re-editing, because we were thinking this (ad lib) joke’s great so let’s put it in, let’s re-time this ending so we can put these jokes that Heggie’s come up with here. It was great having so many funny people through the room giving them the opportunity to add their stamps to their characters.”

Reward your time with these TV shows