Home » Lifestyle » ‘Total Bellas’: Brie Fears Nikki Will Say No To Artem’s Proposal As He Reveals Plans To Pop The Question 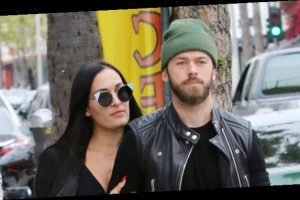 Artem Chigvintsev bought a ring and made plans to propose to Nikki Bella on the May 28 episode of ‘Total Bellas,’ but her sister Brie was worried that he might be moving too fast.

Nikki Bella and Brie Bella were in the midst of planning a trip to France for their wine brand on the May 28 episode of Total Bellas. The trip started out with just the twins and Nikki’s boyfriend, Artem Chigvintsev, attending, but during a family dinner, Artem revealed that he’d also invited his parents from Russia. Considering Nikki had never met his parents before, she was a bit nervous. “Artem hasn’t seen his parents for years,” Nikki explained. “And this is a time when I’m going tow ant to get wine buzzed and just kind of be free. And, well, we know how that goes!”

Once Brie heard that Artem was having his parents come to France, she began to speculate that he might have something much bigger planned for the trip. After all, in last week’s episode, he asked her to come with him when he shopped for an engagement ring for Nikki! However, when Artem found out how expensive the ring he wanted to get Nikki would be, he began to have second thoughts. Brie brought this up with the twins’ mom, Kathy, during this week’s episode. “It seemed like he wasn’t going to get a ring,” Brie explained. “He was sweating ba**s. He’s like, ‘I don’t think I can afford this ring.’”

Kathy was equally as shocked by the possibility that Artem could be proposing. “He’s not even working right now,” she said. “I don’t want that pressure on him. I was with them when he did a fake [proposal] and she almost kicked him off the mountain, she was so shocked.” All season long on Total Bellas, Nikki has been open about her commitment issues. She made it clear that, while she loved Artem, she didn’t know if she wanted to look too far into the future in terms of marriage and kids at the time.

Admittedly, Brie was worried that Nikki would say ‘no’ if Artem did propose in France. “I feel bad because I pushed him [to look at rings],” Brie said. “He needs to talk to me, because he’s going to be mad at me if he proposes to her in front of his parents and she says no. My sister loves Artem, and I think down the road, she would say yes. But I feel like this is going to freak her out.”