A transgender woman who was Ireland’s first recipient of complete reassignment surgery has told how she felt trapped in the wrong body when she was three years old.

Rebecca Tallon De Havilland, 60, was born in County Longford, Ireland, as Eamon Tallon, but told how some of her earliest memories are of being filled with hatred at the sight of her male genitalia.

She said: ”People ask transgender children now, “How can you know? You’re so young” – but I knew. If I’d realised back then that you could take hormone blockers, I’d have been first in the queue.’

Not realising what it meant to be transgender, Rebecca married a woman and fathered a child before later trying to live as a gay man, thinking it might be an answer to her underlying identity issues. 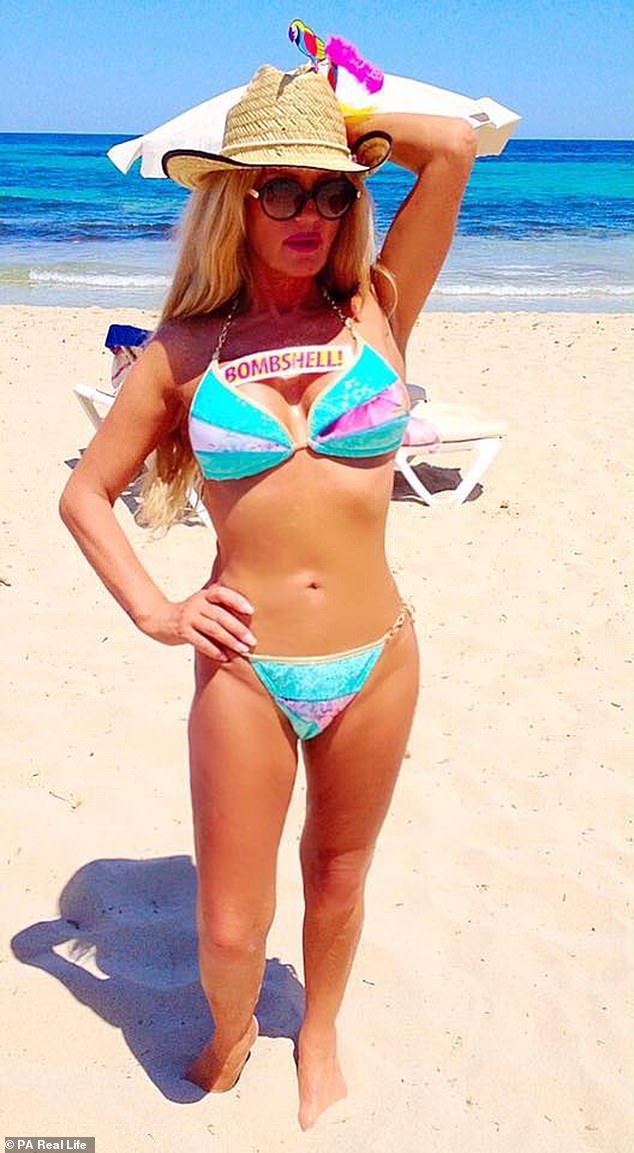 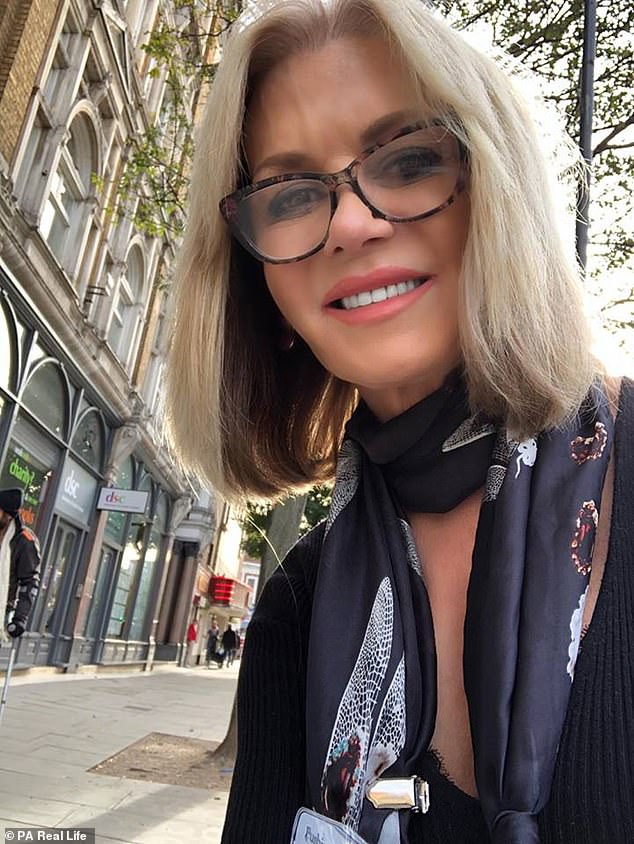 Difficult journey: Rebecca, pictured today, married and fathered a child before trying to live as a gay man. She also worked as an escort during a difficult period 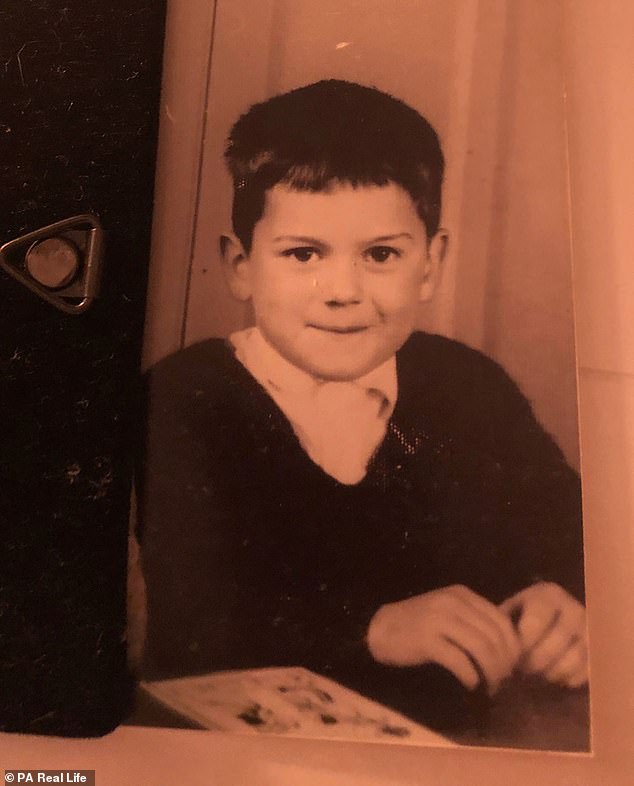 Early years: She born in County Longford, Ireland, as Eamon Tallon, pictured, but told how she felt trapped in the wrong body when she was three years old

After moving to London, she met transgender women and realised with great relief that she had been born the wrong gender. She underwent gender reassignment in 1991, garnering widespread media attention, particularly in Ireland.

Born into a middle-class family as a boy called Eamon Tallon, despite not feeling like a male, Rebecca did not discuss her confusion as, back then, she remembers even same sex relationships were taboo in Ireland.

She continued: ‘As a child, I would do things like drape the net curtains over my head, pretending I had long hair. I would get a laugh, but deep down, being female was what I truly wanted. 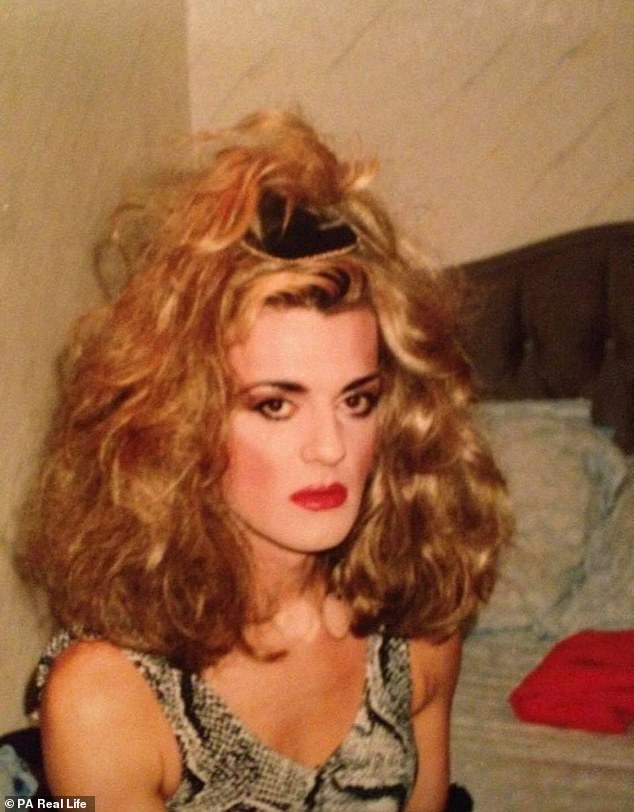 Finding her way: Rebecca in the 1980s, before her gender reassignment surgery 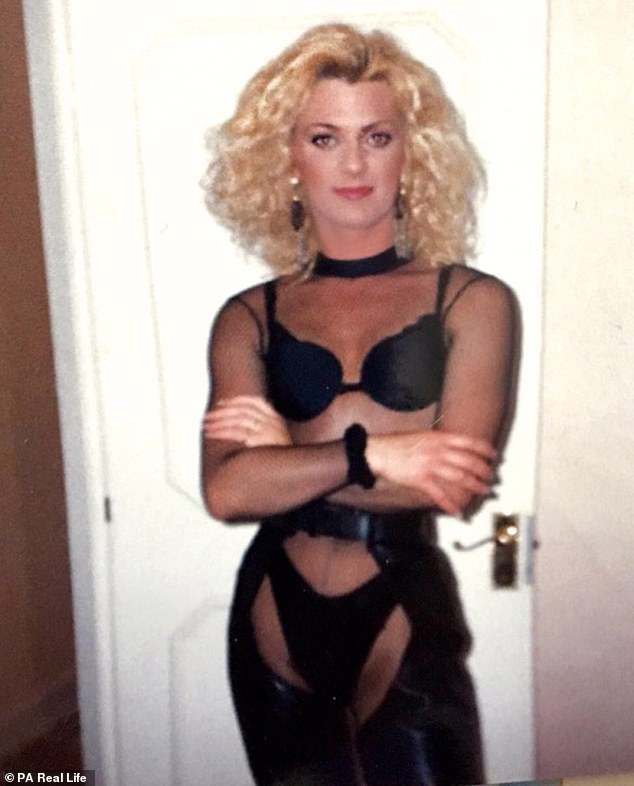 Discovery: On moving to London, Rebecca learnt about the transgender community and realise she was living the same experience

‘I was a late developer, puberty wise, which I think was my body sub-consciously trying to block it all out as I didn’t want it to happen.’

Her discomfort had been exacerbated by being sent to an all boys’ boarding school aged seven, which she then left at 12.

From there, she attended another non-boarding school until the age of 15, which she was later expelled from for feeling that she didn’t fit in and eventually rebelling.

Thankfully, work was her salvation when she discovered hairdressing – a career she loved – although she still struggled with her identity.

‘I felt pressured to be a certain way,’ she said. ‘Back then, you didn’t have Google or phones. We survived on what we saw, and our wits – and nobody was talking about being transgender. 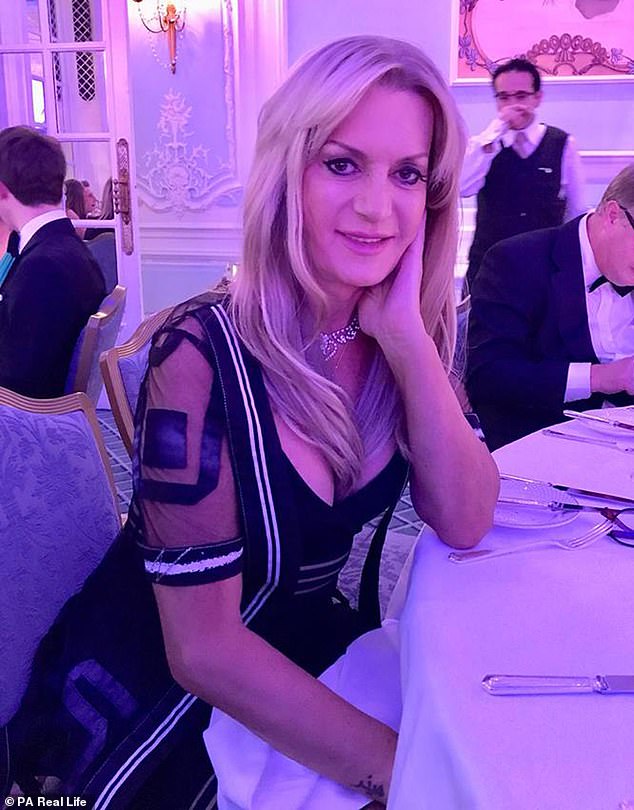 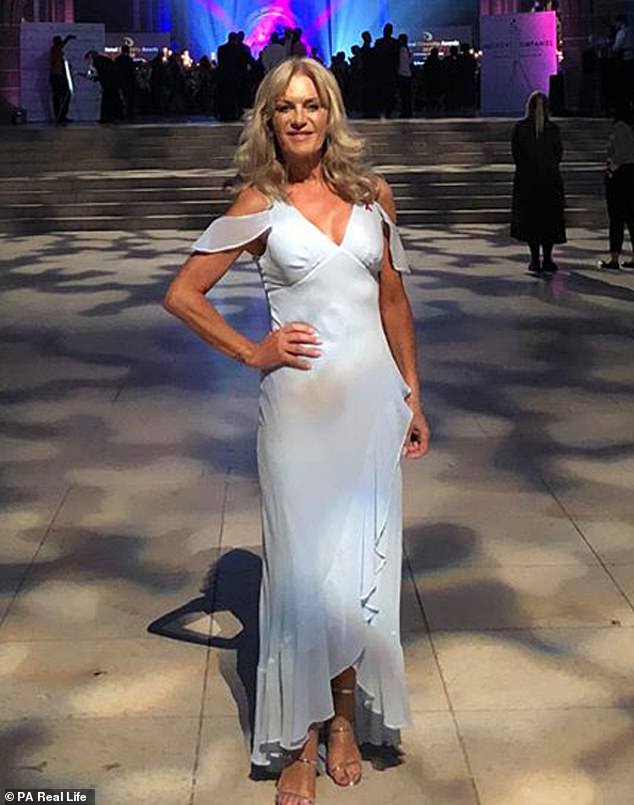 Turning point: Rebecca said she first felt like herself when she had sex as a woman for the first time

‘So, I married and had a daughter, who I loved enormously, but I still didn’t know who I was.

‘I tried being a straight man, and that wasn’t me, so I tried being a gay man, but being homosexual was illegal back then, and it still didn’t fit my identity, so it led to difficulties with seeing my child.’

It was not until Rebecca’s career brought her over to London in 1984 that she met with like-minded people in the city’s bohemian Soho district, and finally realised her issues were because she was transgender.

She continued: ‘I met with and spoke to transgender people who’d had gender reassignment surgery and it was hugely emotional to realise that’s what I was, and what I wanted, too.’

Finally knowing who she was, Rebecca set her sights on raising the £10,000 needed for surgery, which would include breast implants.

But, in 1987, just before she prepared to go under the knife, a routine blood test revealed she had HIV.

She recalled: ‘Though I didn’t tell many people about the diagnosis, the news about my transition had got out, and I lost everything virtually overnight. I needed money for my surgery but was absolutely penniless.

‘I started escorting which, in turn, made me find alcohol and drugs. I felt I’d come to the line. I’d lost my career and loved ones, I’d been given two years to live – I needed something to numb the pain.’ 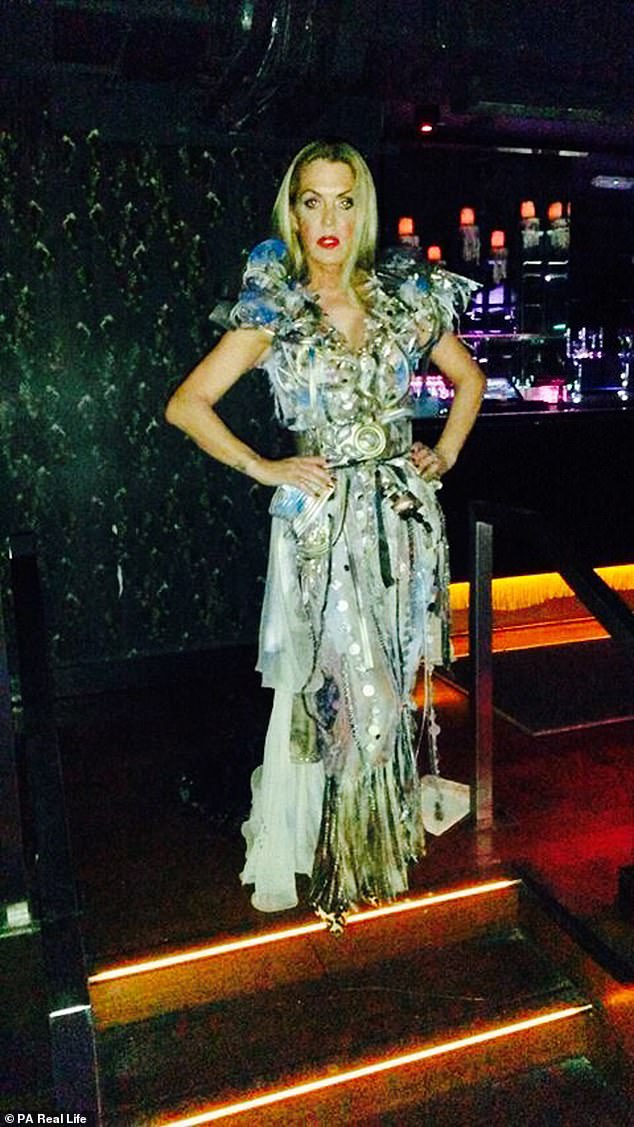 Family ties: Rebecca, pictured, reconnected with her daughter after many years estranged

Still, despite her life being in turmoil, in 1991 she had full gender reassignment surgery via St Charles Hospital’s Raymede Clinic, having already lived as a woman for several years.

She continued: ‘I was in the papers a lot then for being trans, especially back home in Ireland. That did me no favours, but it did the world a favour as it brought transgender issues into the mainstream media.

‘A few journalists in particular saved me at times by showing me, finally, in a positive way. Someone out there could have been watching me, thinking, “That’s me. I need to transition too”.’

Rebecca, now a tireless campaigner for the HIV charity the Terrence Higgins Trust, said it was making love to a man for the first time that made her feel truly female.

She added: ‘I made love as a woman for the first time aged 31, and I finally thought, “This is me”.’ It was so emotional. I’d dealt with so much heartache and humiliation to get to where I was.’

But Rebecca – who fortunately defied her pessimistic two-year prognosis – still had a long way to go before her life was back on track. 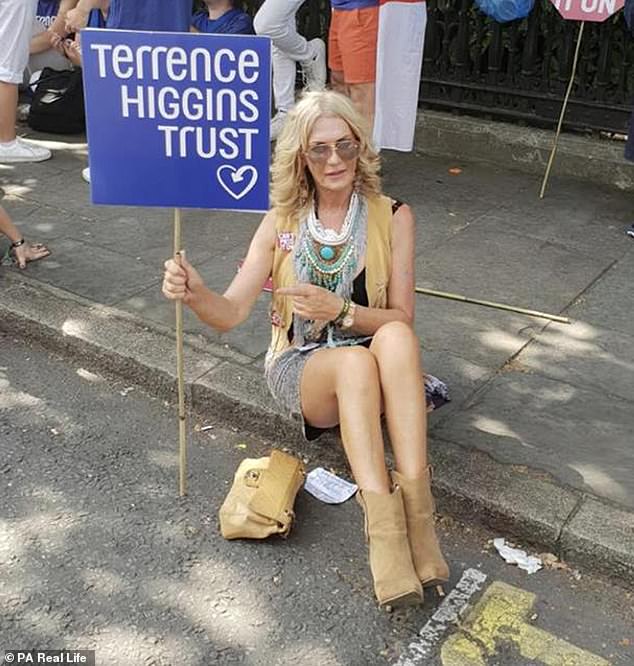 Taking medication for HIV, she supported herself any which way she could – even working as a madam in a male brothel in Amsterdam, Holland.

Then, in 2007, after she was hospitalised twice for an drug overdose, she woke up to the damage her hedonistic lifestyle was doing to her and got sober – then penning her life story in 2010, although she omitted any detail about having HIV.

She said: ‘For a long time, I didn’t tell anybody about my diagnosis. I wanted to out myself without being victimised. Telling people was one of the scariest things I have ever done, but now I am finally out of the shadows.

‘I have realised HIV isn’t fussy. It isn’t just something sex workers or gay people get – it can happen to anyone.

‘I now want to help raise awareness because it’s often said that if we end the stigma, we can end HIV – but you have to start at the root of it, which for me, is correcting that common misconception that HIV and AIDs are the same thing.’

Meanwhile, when she was 51, Rebecca returned to Ireland to reconnect with her family.

‘I’d been in such a drug haze before that I knew they hadn’t met the true Rebecca yet,’ she said.

‘I can understand it must’ve been difficult for them. They’d lost a son and brother – but now had this daughter and sister in his place. They were very supportive and told me they loved me no matter what though.’

Deciding to stay in Ireland, Rebecca got a job performing as a hostess, nicknamed Lady V, at a Dublin club.

Talking to a colleague about her life one day, it was mentioned that a girl who worked in the ticket kiosk had a transgender father, who had gone to London years before.

Unbelievably, that woman turned out to be Rebecca’s daughter, who she soon reconnected with.

‘I was astonished when I joined the dots and realised it was her,’ said Rebecca, who does not wish to reveal daughter’s name. ‘My head went into panic mode, but I’d done my last running and hiding.

‘I met with my daughter and told her my side of the story and how hard I’d been fighting and she was amazing. Having her back in my life has made every part of my journey worthwhile.’

Just a year later, though, Rebecca’s health deteriorated and she was admitted to hospital with pneumonia, having run out of her HIV medication, but been worried about getting more from doctors back in Ireland, as nobody there knew she had the condition.

‘I was in hospital for a month and didn’t want anyone to see me, as my family didn’t know then that I had HIV,’ she said. ‘I really thought I was going to die, but I was desperate to get a second opinion to see if there was anyone out there that could help me.’

So, Rebecca raced back to London’s Chelsea and Westminster Hospital, where she had been treated before.

She said: ‘I’d survived everything else – why not this? I ended up being a very sorry girl indeed, though.’

Rebecca moved back to London and, by 2015, she was declared ‘undetectable’ – meaning the HIV virus levels in her body are so low, that blood tests do not pick it up.

Finally at peace, she wanted to use her own astonishing experiences to help others.

Rebecca has worked with the Terrence Higgins Trust, learning essential skills through their Work Positive programme, before landing a job with their Soho Outreach branch.

This year marks the 30th anniversary of World AIDS Day, and the UK’s leading HIV charity Terrence Higgins Trust has used it to launch its #ZeroHIV campaign. The campaign ends to reach zero HIV transmissions and zero HIV stigma here in the UK.

Currently, there is a global target to end HIV of 2030, and so many people believe that it can be ended in the UK even sooner.