Home » Lifestyle » Trust Me, You'll Want to Try These Vibrators the Next Time You're PMS-ing

Trust Me, You'll Want to Try These Vibrators the Next Time You're PMS-ing 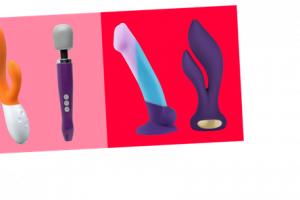 When I say I’ve struggled with period cramps my entire life, I mean my entire life. From the time I started my period at 13 to well into my twenties, it’s always been an issue finding relief. (And trust me, I’ve tried all the heating pads, exercise, OTC meds, vitamins, looping in my ob-gyn, CBD, cream, you name it.)

I was skeptical, but not because of the many negative pre-existing sociocultural stigmas around menstruation. I know for some people, the thought of pleasuring yourself or even having sex during this time can be messy and awkward, but that wasn’t my issue. It was more about whether this would actually work?

Convinced it was a fluke, I tried again that same day and it was the same experience. My pain level from the cramps had not only subsided but they also didn’t come back. Plus, I was in a much, much better mood.

The next month, I repeated the routine and experienced relief again. And nearly a decade later, this has become my go-to method to manage cramps and other symptoms from my cycle, like bloating and moodiness.

The “menstrubation study” (ha, get it?) consisted of 486 participants in total, and it found that a little self love during this time of the month not only alleviated cramps, but also helped to reduce other symptoms associated with menstruation such as diarrhea, breast pain, pain in lower back, thighs and other areas.

But if you want to get more specific, Dr. Langdon adds: “After an orgasm, there is vasodilation [aka widening of blood vessels, usually near the surface of skin, leading to increased blood flow] and relaxation of the pelvic organs with the release of happy hormones.” This = why you could experience almost immediate period relief.

So because every body is different and PMS symptoms vary person-to-person (as do preferences when it comes to, say, whether you’re comfy using an internal toy during your period), I spoke to six other people who also turn to orgasms for period cramp relief to get the low-down on their fave toys that help them.

Remember though: While it’s possible these options may help you, be mindful it might also take some exploration on your end too. And TBH, that just sounds like a really fun science experiment.

This one is my personal fave. It has eight speeds and is one of the strongest vibrators you can get on the market—seriously, I’ve tried a lot of vibrators. It gets me off incredibly quickly, and when you are experiencing any type of pain, every second counts.

3. Bedroom Kandy Make Me Over Massager

Nyema, 29, says this is like the Lamborghini of sex toys. It has 12 speeds, an extra stimulator head, is waterproof, and even has an autopilot setting. Use it for if you’re sensitive to touch down there on your cycle because hi, this one touts some light stimulation options that aren’t too aggressive.

Millie, 27, picks The Dea since it offers seven different speeds and gives both internal and external pleasure for a blended orgasm. Plus, it’s waterproof (as are all the others on this list) and that’s helpful for any liquid down there.