TV Ad Chiefs Press Madison Avenue to Gaze Into Future, Not the Present 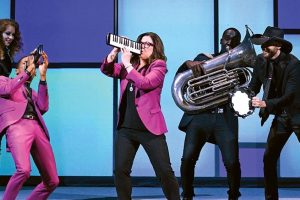 Jo Ann Ross has long recognized when to go for the hard- sell and when to soften things up.

The Paramount Global U.S. ad sales chief is, like other executives in her position, is seizing this week to pitch big advertisers as part of the media industry’s annual “upfront,” when U.S. TV companies seek to sell the bulk of their commercial inventory. But the event’s glitzy presentations and parties are taking place amid concerns about the effects of Russia’s invasion into Ukraine and amid ongoing concerns about how supply-chain issues might affect specific ad categories. The week takes place just after a significant drop in the stock market has sparked chatter about the state of the nation’s economy.

“I think that everybody in the industry understands what the whole country is going through in terms of the visibility toward next year, in terms of supply-chain issues that we are still dealing with because of Covid,” says Ross, who is slated to appear before advertisers Wednesday afternoon in New York’s Carnegie Hall in what has become a staple event of TV’s Upfront Week. “We are looking to get together with clients and understand what their needs are and what they want to do” in months to come.

One tracker of ad spending has cautioned that the war in Ukraine is likely to tamp down U.S. ad spending by a small amount. And while pharmaceutical advertiser –a cornerstone of modern TV’s ad support – are expected to spend robustly, buyers say they are not seeing similar trends from some big marketers of consumer-packaged goods and even some technology companies which have seen their share prices fall in recent days. Magna, an Interpublic Group media-research unit, sees increases in ad spending coming from telecommunications providers, travel marketers, and sports-betting operators.

The networks are rolling out dozens of new commercial formats, advertising technologies and new series aimed at getting Madison Avenue to stop worrying about the recent past and instead focus on the future. Most are burnishing live sports programming, which continues to generate the big simultaneous audiences that advertisers crave. Both Paramount and NBCUniversal are offering new types of creative ventures, including so-called “shoppable” ads that users can interact with or “franchise buying” that allows ad to run with a popular series no matter the venue in which it runs. Disney on Tuesday gave advertisers a look at its coming Marvel releases, well aware that many are interesting in the prospect of an ad-supported tier on Disney+.

While they are best known for traditional TV, the networks are also bringing online a lot of streaming inventory that requires commercial support. NBCU spent much time on Monday talking about its Peacock streaming video hub, as Fox did with its Tubi. Many of the series Disney introduced were slated to run on Hulu or Disney+. Paramount will likely highlight both its Paramount+, which can be purchased In different service tiers, and Pluto, its free ad-supported streaming venture.

One category of advertiser has many in the business fretting. Automotive advertisers, which have faced challenges in obtaining the materials necessary for chips that help run internal functions in cars. The category has been an important one for TV for decades.

Many TV networks believe the auto makers will show up. After all, says Linda Yaccarino, chairman of global advertising and partnerships at NBCUniversal, there is talk about chips being ready in the middle of fourth quarter and there are indications of dozens of new model launches next year. “Can you imagine the need to invest in premium content to get your message out?” she asks.

Others believe the first quarter of next year could be a busy one, and suggest advertisers will want to put money down now rather than waiting to see if they will be charged higher “scatter” rates when the time draws closer. “My conversations with advertisers so far have been that they don’t know when the supply chain will loosen up,” says Jon Steinlauf, who oversees U.S. ad sales for Warner Bros. Discovery. “When it does, there is going to be more of a need to be advertising and competing for market share.”

Executives at Fox Corp. believe their broadcast network may not affected directly buy some of the categories thought to be pulling back. Fox’s sports content “captures all of the betting and cryptocurrencies” and other emerging categories, says Marianne Gambelli, president of ad sales at Fox Corp. Advertisers, she says, have been living with uncertainty for several years now “and we have always been able to transact.”