While some people have been taking to social media to share their highlights and achievements of the year gone by, others are using the New Year to reflect on past mistakes.

In a hilarious thread, started by Rachel Millman, from Brooklyn, New York, Twitter users have revealed the stupidest things they did in 2018 – including one man who lost a bet and ended up getting a Steve Buscemi tattoo.

Rachel asked her followers to reveal something ridiculous and the 1,600 responses did not disappoint, with one woman admitting she almost stole a coyote after thinking it was a stray puppy, and another saying they tried to zoom in on a paper map.

Other brilliant tales include a man who tried to unlock his front door with his car keys, and another who told a receptionist at a doctor’s office he ‘needed a cleaning’ after mistaking it for a dentist.

Viviane tried to help her husband get their cat into a crate for a vet trip, but put the wrong cat in the box after taking off her glasses 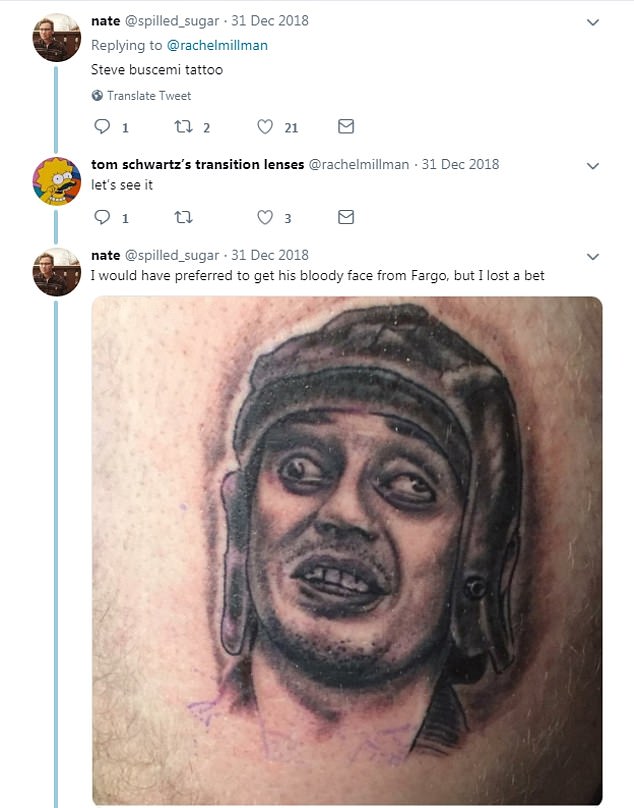 Nate, from Syracuse in New York, got this Steve Buscemi tattoo after losing a bet

Bethel Habte, from Brooklyn, New York, was so used to map apps that she tried to zoom in on a paper one

One user’s wife used the wrong shade of paint, thinking it would dry and get darker – but it didn’t

Journalist Alex Pareene, from Brooklyn, accidentally burnt a hole in the rug after putting it down when the fire alarm went off

A tattoo artist from Detroit, Michigan, tried to adopt a coyote when she mistook it for a stray puppy – and it wasn’t the first time

Another user, from Seattle, regretted his decision to grow a moustache for his passport photo when he was interrogated about it at the airport

Lesley Arimah, from Minneapolis, Minnesota, ended up punching a fellow passenger on the tube in the face while trying to grab a pole

Joelle Colville Hanson, a pastor from Waterloo, Iowa, was so disorientated from a nap that she thought it was the next day

Lora, from Oklahoma, thought she was talking to an intercom while drunk at a bowling alley that turned out to be a hand dryer