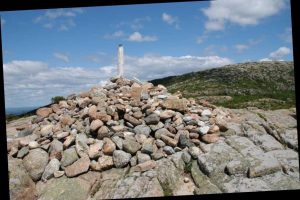 Two people were found dead in Acadia National Park in Maine this weekend after a fatal hiking accident, the National Park Service reported.

The man, 28, and woman, 30, both of Rutland, Massachusetts, appeared to have fallen about 100 feet along ice-covered cliff bands on Dorr Mountain, NPS reported. Their names have not been released.

The two hikers arrived in Bar Harbor, Maine on March 16 and were last heard from on March 18 around noon. At that time, the woman called family members on her cell phone to discuss her interest in hiking Cadillac Mountain, near Dorr Mountain.

Relatives reported the hikers missing on Friday when the pair did not check out of their hotel as scheduled or return to their vehicle. When the overnight search proved unsuccessful, a 15-member volunteer team began a ground search on Saturday and found the bodies later that morning, according to the report.

Their bodies were recovered by park rangers with help from Mount Desert Island Search and Rescue and a helicopter from the Maine Forest Service.

"All trails in Acadia are incredibly icy at this time due to recent rains followed by days of cold weather," Jay Elhard, a spokesman with NPS, told ABC News on Sunday. "Hikers should be prepared for cold and icy conditions with extra layers of clothing and traction control devices."

Never miss a story — sign up for PEOPLE's free weekly newsletter to get the biggest news of the week delivered to your inbox every Friday.

NPS rangers and Maine State Police are investigating the incident with assistance from the Bar Harbor Police Department.