Home » Lifestyle » Tyson Fury’s wife: Everything you need to know about Paris Fury 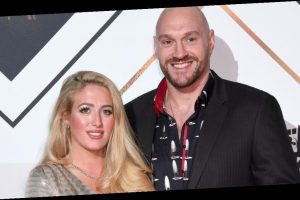 Boxing champion Tyson Fury, also known as the Gypsy King, has been loved-up for over 15 years with his wife Paris.

The stunning blonde is his biggest supporter, although she admitted recently on Good Morning Britain when speaking of his previous Deontay Wilder fight that "I really didn't want him to box anymore after watching that fight."

But, who exactly is the Gypsy King's wife? Find out more about the woman behind the boxer, below.

Who is Paris Fury?

Paris and Tyson met at a wedding of mutual friends. She was 15 and he was 17 at the time.

Paris was raised in a traditional traveller family in Doncaster, South Yorkshire, which is similar to Tyson's upbringing as he was raised in Wythenshaw, Manchester, in a similar community.

They pair bumped into each other again by chance at Paris' 16h birthday party and became a couple after going ice skating and to the cinema every weekend.

Reflecting on the moment she was first introduced to Tyson, Paris said: “I lifted my head and I was expecting to see someone at eye level because I’m not small myself, I’m five foot eight.

“I remember thinking, ‘Whose this old man you’re introducing me to?’”

She added: “We ended up going out a few times, but to us ‘going out’ means that yes you go on dates and you see each other, but you don’t kiss, you don’t cuddle, you don’t do nothing.”

When did they marry?

The couple married in 2008 with a traditional ceremony in Doncaster in front of over 300 guests. Because the traveller community is quite traditional the pair did not sleep together until their wedding night.

In an interview with BBC Sport Tyson said: "Boxing is like a marriage – you have to work at it. You do fall in and out of love.

"But I have spiced it back up again, bought her some sexy lingerie and we are back at it, better than ever."

Do they have children?

Less than 24 hours before his fight with Wladimir Klitschko in 2015, Paris told Tyson she was pregnant with Prince John James.

Tyson has revealed that Paris suffered a miscarriage in 2014 but did not let him know until after his fight with Albanian Sefer Seferi.

"I've never spoken about this before, but my wife Paris gave birth to a child at six months old that was dead," he told the Daily Telegraph previously.

Despite that traumatic time Paris revealed to the Telegraph that they hope to have at least 10 children.

END_OF_DOCUMENT_TOKEN_TO_BE_REPLACED

END_OF_DOCUMENT_TOKEN_TO_BE_REPLACED
We and our partners use cookies on this site to improve our service, perform analytics, personalize advertising, measure advertising performance, and remember website preferences.Ok