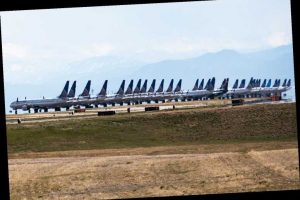 With the coronavirus pandemic keeping many Americans stuck inside their homes for months on end, greenhouse gas emissions in the U.S. dropped a whopping 9.2 percent in 2020 — reaching levels not seen since the early 1980s, according to a new report.

The new analysis released this week by BloombergNEF said that while U.S. greenhouse gas emissions have been trending downwards for the past 12 years, this year’s drop is the biggest on record, according to Bloomberg.

Bloomberg reported that the last time the country had gas emissions this low was 1983, when the economy was just 40 percent of the size it is now.

The bulk of the decline — about 40 percent — came from the transportation sector, emissions from which dropped 14 percent, the Washington Post reported. That sector is typically the biggest contributor to the country’s greenhouse gas emissions, according to Bloomberg.

Despite the progress, net emissions are only expected to be 6.4 percent lower, as the forest fires that hit the U.S. earlier this year and sent carbon dioxide into the air also must be taken into account, according to the Post.

Still, the drop means that the United States is back on track to meet commitments laid out in the Paris climate agreement, which aims to keep global temperature rise below 2 degrees C.

Though the Obama administration put the U.S. in the agreement in 2015, President Donald Trump pulled the country out, and in the last few years, the U.S. has fallen significantly behind its targets, according to the Post. President-elect Biden, however, has said he will rejoin the agreement when he takes office.

Tom Rowlands-Rees, BloombergNEF’s head of North America analysis, said that while 2020 “could be a watershed year” for the country’s climate ambitions, there is still a lot of work to be done.

“While on the one hand a 9% drop in one year is huge, it still leaves a long way to go to address climate concerns. And clearly the kind of disruption we’ve experienced this year is unsustainable,” he wrote. “So to state the obvious, smart policy and structural change are key.”

“If the U.S. does re-enter the Paris agreement, then 2020 has inadvertently put it back on track to meet its original commitments,” he added. “But even with the most optimistic view on power sector decarbonization, more needs to change in other sectors to hit the 2025 goal.”

The report predicted that despite the decline this year, 2021 will see a record increase in year-on-year emission, Bloomberg reported.

“The amount of pain we’ve had to go through for a relatively modest drop shows that there needs to be more smart policy and smart thinking about emissions,” Ethan Zindler, BloombergNEF’s head of Americas, told the Post. “The emphasis has to be not on how to reduce demand, but how to make supply more green.”