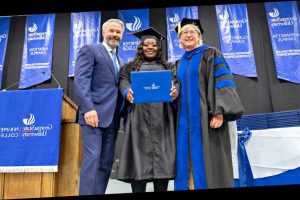 In May 2018, Uber driver Latonya Young’s passenger changed her life. Chatting with Kevin Esch after picking him up from an Atlanta United soccer game, the single mom told him she was driving an Uber to pay off her electric bill, and to save enough money to go back to school. He told her to stop thinking about going back to school and to actually do it. At the end of the 20-minute ride, he gave her a $150 tip to pay off the electric bill –  and they took a selfie.

The two kept in touch, a couple of weeks later, Young texted Esch that she tried to register for classes, but the school said she couldn’t enroll until her outstanding balance was paid. Esch responded that he was going to put his money where his mouth is – and remove the obstacle for her. If she wanted to go to school,  he wanted to make that happen. On July 2, 2018, Esch texted Young a picture of a receipt from Georgia State University’s cashier’s office – he paid the $693 Young owed.

"I didn’t want that to be what stops her," says Esch, a 45-year-old estate manager. "I wanted to take care of it."

In December 2019, Young graduated with an associate’s degree from Georgia State’s Perimeter College.

"It inspired me," says Young, 44, of her benefactor's act of generosity. "It pushed me to go to school … he just really wanted me to do well. And he was a total stranger."

Now, Esch is a friend and mentor. Young texts him about her grades and updates him on her academic progress. During the pandemic, Young continued her studies online,  and in Spring 2021 she plans to graduate with her bachelor’s degree in criminal justice from Georgia State’s Andrew Young School of Policy Studies. (After she graduates, she’s debating whether to go to law school or nursing school to help fight the pandemic.)

"I gained a friend," she of her bond with Esch.

"I’m so incredibly proud of her," says Esch. "The ultimate payback that I can get is watching her graduate." Esch is a man who pays for strangers Starbucks, buys meals for homeless people, and will randomly pay for groceries of the person standing behind him in line.

"I try to do acts of kindness all the time. I really truly feel that if you put good out in the world, you're going to get good back," Esch says. "I look for things to try to help people."

Esch is now a member of the board of the Jeannette Rankin Women’s Scholarship Fund which provides scholarships and support for women over 35 struggling to pay for school. Young is a recipient.

"They cover whatever it is that's holding people back and they're about to get kicked out of school because they don't have the money to pay for it," Esch says. "It's a pretty incredible organization."

Along with encouraging her son to continue his education, Young hopes her success also inspires other women to go to school.

"I just want everybody out there to be encouraged not to give up," Young says.

For even more Stories to Make you Smile, pick up the latest issue of PEOPLE, on newsstands Friday.