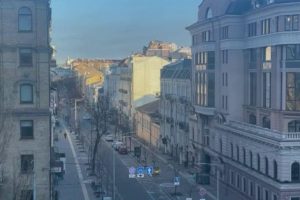 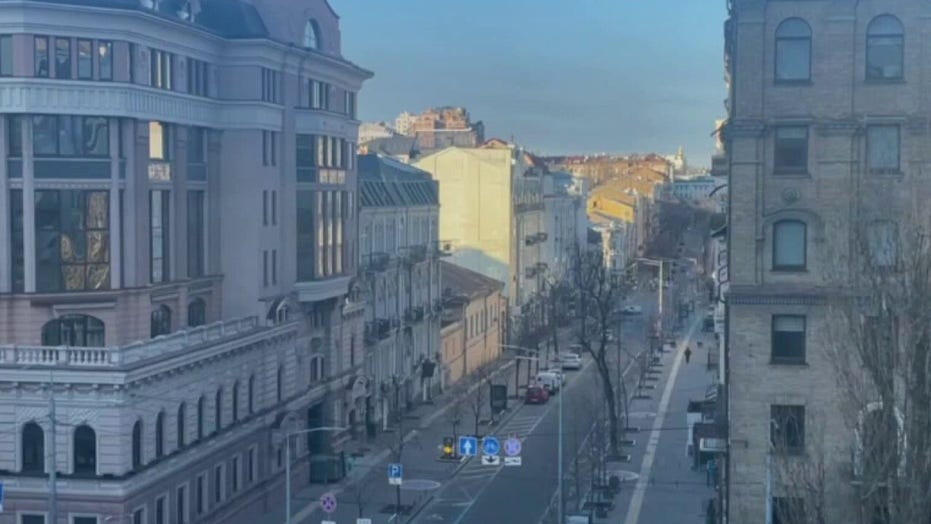 Russian attack on Kyiv could be ‘quite devastating’: Gen. Keane

Dramatic photos shared with Fox News Digital on Monday show one family’s almost unbearable heartache as a Ukrainian father is forced to bid his tearful young son goodbye, telling the child, “Be brave for your mother.”

The man was sending his family off to Hungary from a local train station in Ukraine, The Mirror reported.

The man’s goal was to get his beloved family — his wife and two children — away from the danger and chaos of war as Russian President Vladimir Putin’s forces continue to push their way into Ukraine in an all-out assault on that country.

The father and son are shown hugging and saying a painfully emotional goodbye to each other at the Lviv Train Station. 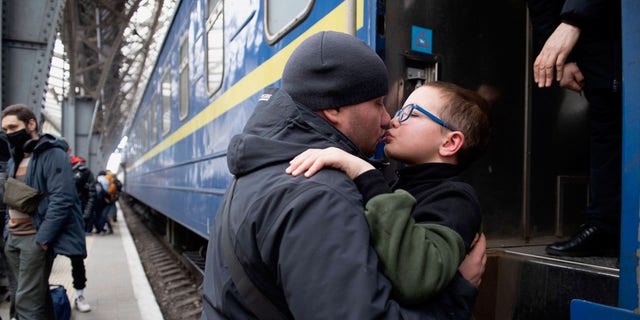 A painful parting for this father and son in Lviv, Ukraine, is captured here as a Ukrainian father must bid his young son goodbye. The dad had to send his young family off to Hungary — while he stayed behind in Ukraine to help ward off the Russian attacks on his country along with thousands of other Ukrainian men.
(Daily Mirror/Andy Stenning/Mega)

The dad, Ruslan Gladkiy, gave his nine-year-old son, Hordeiy, a big bear hug as he put him, his daughter and wife on a train in Lviv, the report noted.

Young Hordeiy was so overtaken with emotion in the moment of having to part with his father that he had to take off his glasses.

The father expressed how “very difficult” the moment was for him as well.

“I did not want to say goodbye to my family. They are going to Hungary,” he told the outlet. 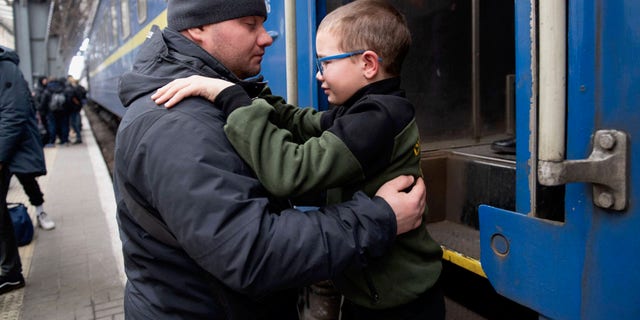 Father and son are forced to part at a train station in Lviv, Ukraine, as Putin’s Russian forces threaten the country. Ruslan Gladkiy shared how difficult it was to say goodbye to his nine-year-old son and send him off to Hungary.
(Daily Mirror/Andy Stenning/Mega)

“We live 250 kilometers [about 155 miles] from Lviv and I drove them here this morning to get the train,” the father also said, the report noted.

He added about himself, “I am staying.”

IN UKRAINE-RUSSIA WAR, ‘BABIES AND CHILDREN PAY THE HIGHEST PRICE’

Numerous families throughout Ukraine have been torn apart by the war begun by Russia, according to many other reports. 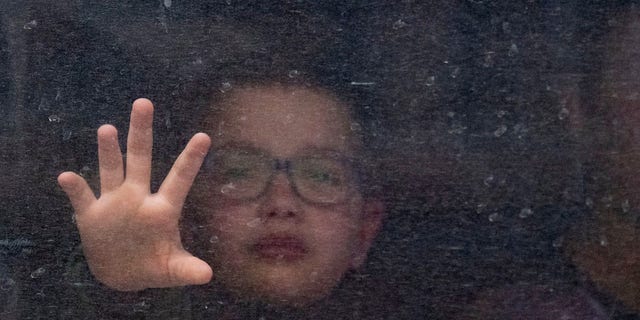 Just after a Ukrainian father said goodbye to his son in Lviv, Ukraine, with the words, "Be brave for your mother," the child is shown reaching for his father from inside the train through the water-streaked window.
(Daily Mirror/Andy Stenning/Mega)

In addition, scores of Ukrainian Americans all over the U.S. are expressing their outrage, upset and concern for family, friends and colleagues who are still in Ukraine and who are facing grave danger.

Many Ukrainians have already been displaced and separated from loved ones.

In some of the latest news connected to the war, Fox News Digital is reporting on Monday that the Ukrainian Parliament sent a letter to Congress detailing the particular weapons and other materials the country needs as it battles the Russian forces on its own Ukrainian land. 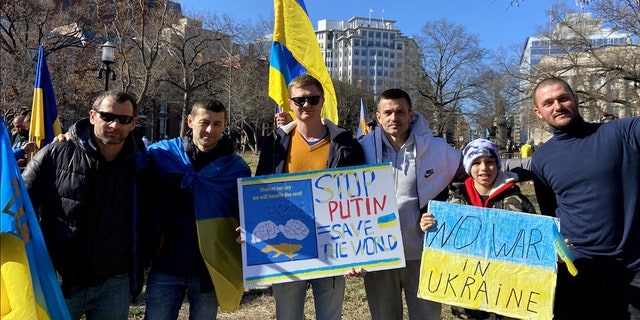 Ukrainian Americans protest outside the White House in Washington, D.C., calling on the U.S. to do more to help Ukraine.
(Fox News Digital/Lisa Bennatan)

The list of weapons and material requested by Ukraine include FIM-92 Stingers; AT guided weapons; small arms, grenade launchers and other ammunition produced in the Warsaw Pact states (which were to be delivered to Afghanistan by the U.S.); and military portable radio sets.

The Ukrainian Parliament also made a special request for a MIM-104 Patriot surface-to-air missile system.

“The safety and the establishment of [the] no-fly zone above Ukraine may prove to be the most important and valuable part of the support from our partners,” it said.

Stay with Fox News Digital for the latest updates on the Ukraine-Russia story.