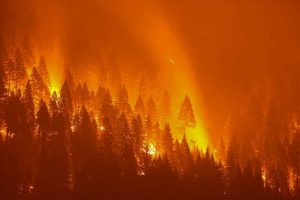 LONDON, Aug 5 – Eight years after its last update on climate science, the United Nations is set to publish a report Monday that will likely deliver even starker warnings about how quickly the planet is warming – and how damaging the impacts might get.

Since the last report by the U.N. Intergovernmental Panel on Climate Change (IPCC) in 2013, both greenhouse gas emissions and the average global temperature have only continued to climb.

The new report will forecast how much more emissions can be pumped into the atmosphere before the average global temperature rises more than 1.5 degrees Celsius. That revised carbon budget may serve as a guide to governments as they map out their own emissions-cutting plans before a major U.N. climate conference in November.

Scientists say the world must halve global emissions by 2030 and cut them to net-zero by 2050 in order to prevent global warming above 1.5C, which could trigger catastrophic impacts across the globe.

But climate change already is fueling deadly and disastrous weather across the globe. Nearly all of the world’s glaciers are melting faster. Hurricanes are stronger. Just this year, unprecedented rains unleashed floods across parts of central China and Europe, while wildfires are tearing across Siberia, the U.S. West and the Mediterranean.

“The report will cover not only the fact that we are smashing record after record in terms of climate change impacts, but show that the world today is in unchartered territory in terms of sea level rise and ice cover,” said Kelly Levin, chief of science, data and systems change at the Bezos Earth Fund philanthropy.

Overall, the report “will underscore the urgency for governments to ramp up climate action,” she said.

And while the 2013 report said it was “extremely likely” that human industry was causing climate change – which suggests scientists were at least 95% confident in that statement – this year’s report will likely use even stronger language.

“Obviously, it is going to be stronger than what we had in the past because of the growing warming of the planet,” said Corinne Le Quéré, a climate scientist at the University of East Anglia who has contributed to previous IPCC assessments. “That’s going to be one of the main points. It will be discussed very, very carefully, and scrutinized,” Le Quéré told reporters.

What is the IPCC?

Since its establishment in 1988, the IPCC has released five so-called Assessment Reports updating the established science on climate change, its impacts, future risks and ways to tackle the problems.

But the IPCC itself is not made up of scientists. The panel includes government representatives from 195 countries who commission assessments from experts and academics across the world.

In drafting those assessments, scientists consider thousands of individual studies published since the last IPCC report. To finalize their latest assessments for the upcoming report, scientists have been meeting virtually with policymakers since July 26, scrutinizing the details and language used in the draft.

Governments can suggest changes to the text, but those must be agreed by consensus. The scientists then must ensure the changes are consistent with the scientific evidence.

Monday’s report is actually just part of what will go into the final Sixth Assessment Report, or AR6, when it is released in 2022.

The AR6 synthesis report will also include two other major chapters coming out next year – one on climate change impacts on communities, societies and economies and how they might adapt to cope, and another on ways of curbing emissions and reining in climate change. And it will include findings from three special reports published since 2013, on the 1.5C threshold, on the world’s oceans and frozen regions, and on land use and degradation.

But Monday’s chapter is one of the most highly anticipated, particularly after being delayed for months because of the COVID pandemic. Unlike the previous assessments, the chapter will use five possible emissions trajectories the world could follow rather than the previous four scenarios.

“Emissions scenarios are not intended to say: ‘This is the future: pick one’,” said Ko Barrett, vice chair of the IPCC. “Policies are being implemented all the time, and the science is changing all the time, so it is just not fair to say we are on a certain trajectory.”