‘I will sell my husband or my soul for it!’ Beauty lovers go wild over new Game of Thrones-themed makeup collection that includes a pop-up Iron Throne palette and SWORD-shaped brushes

The hotly-anticipated final season of Game of Thrones might not hit screens until next month, but for many fans, the quest of the Iron Throne has already begun thanks to the released of a new makeup collection themed around the popular HBO show.

Beauty brand Urban Decay sparked a flurry of excitement among makeup lovers and Game of Thrones devotees on Friday when it announced the launch of a new limited edition collection of products that pay tribute to the medieval fantasy.

The news about the range – which features a 3-D pop-up Iron Throne eyeshadow palette and two sword-shaped makeup brushes – was met with an outpouring of enthusiasm on Twitter, where dozens of people immediately begged the brand to ‘take their money’ in return for the themed products. 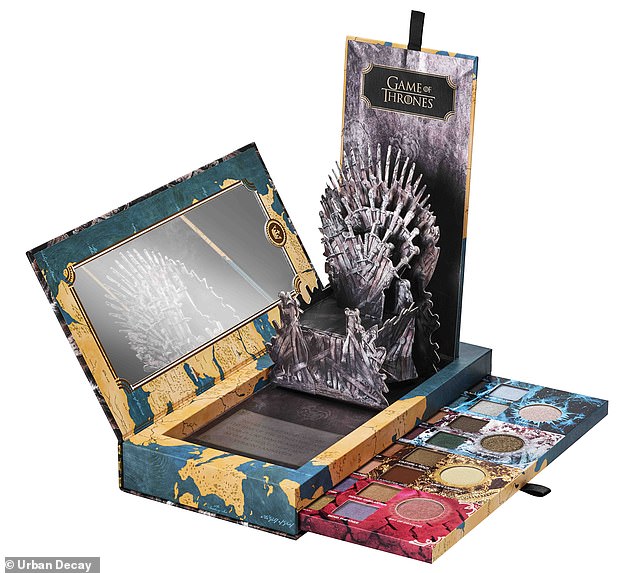 Winter is coming: Urban Decay cause a frenzy of excitement on Friday when it announced the launch of a new Game of Thrones-themed makeup collection, including a pop-up $65 palette 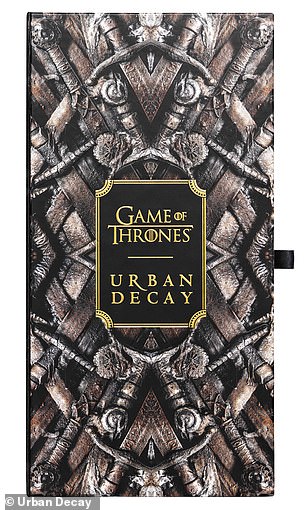 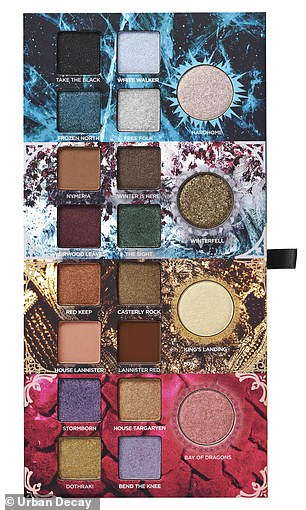 Something for everyone: The Game of Thrones palette features 20 shades, which have been split into four sections, House Targaryen, House Lannister, House Stark and White Walkers 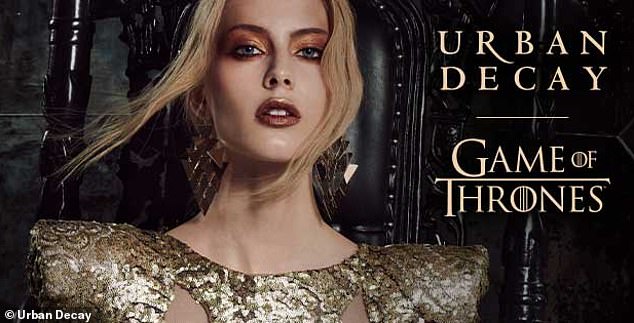 Tribute: The brand explained the collection specifically honors the ‘strong women of Westeros’

‘Why are you doing this to me I’m going to be so poor?’ one person tweeted after the brand posted a video showcasing the collection, while another chimed in: ‘Urban Decay out here really damaging by bank account.’ 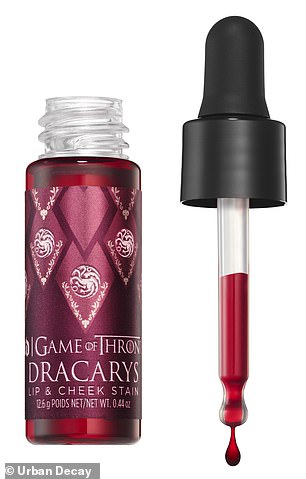 On fire: There is also a ‘universally flattering’ cheek stain inspired by ‘dragonfire’

One person went as far as to exclaim: ‘OK… Am prepared to sell my husband and/or soul for that eyeshadow palette!’

The $65 eyeshadow palette in question features a fun pop-up Iron Throne, as well as a slide out drawer that houses the shadows.

There are 20 shades in total, all of which are split into four different sections representing House Targaryen – the ‘jewel-tone shimmers’ – House Lannister – the ‘regal metallic mattes and shimmers’ – House Stark – the ‘smoky mattes and neutral shimmers’ – and even the White Walkers, which appropriately feature ‘cool, icy shimmers’.

Although many of the key themes, story lines and characters are represented in the collection, the brand noted that it particularly wanted to honor the ‘strong women of Westeros’ with the new range.

Devoted supporters of Daenerys Targaryen will no doubt favor the Mother of Dragons Highlight Palette ($36), which features three shimmering shades that have all been given names inspired by the popular character: Drogon, Viserion, and Rhaegal.

Pucker up: The lipsticks in the collection are named after some of the most powerful female characters (l to r), Cersei Lannister, Daenerys Targaryen, Sansa Stark, and White Walker 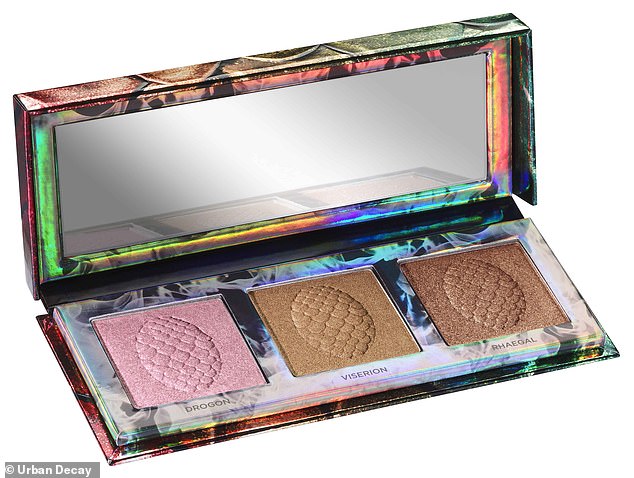 Hot: Devoted supporters of Daenerys Targaryen will no doubt favor the Mother of Dragons Highlight Palette ($36)

For those looking to show their support for the show, or their favorite characters, while spending slightly less money, there are a number of more budget-friendly options included in the collection, including one of the most popular pieces: the two sword-shaped eyeshadow brushes.

Priced at $28 each, the brushes are shaped to represent the weapons of two of the most popular characters: Arya Stark – whose sword is known as Needle – and Jon Snow – whose sword is named Longclaw.

There are also four new shades of the brand’s Vice Lipsticks included, all of which are actually named after characters on the show: Cersei Lannister, a ‘bright metallic bronze’, Daenerys Targaryen, a ‘fiery metallic red’, Sansa Stark a ‘warm peach nude’, and White Walker, a ‘deep berry-wine’.

Urban Decay’s new collection also features four new 24/7 Glide-On Eye Pencils ($19), which have also all been given suitable GoT-themed names, although this time the shades pay tribute more to the environmental elements of the show.

There is Dragon Smoke, a ‘smoky holographic black’, Lannister Gold, which is of course, a ‘metallic gold’, The Night King, a ‘shimmery dark teal’, and Winterfell Snow, an ‘iridescent white’. 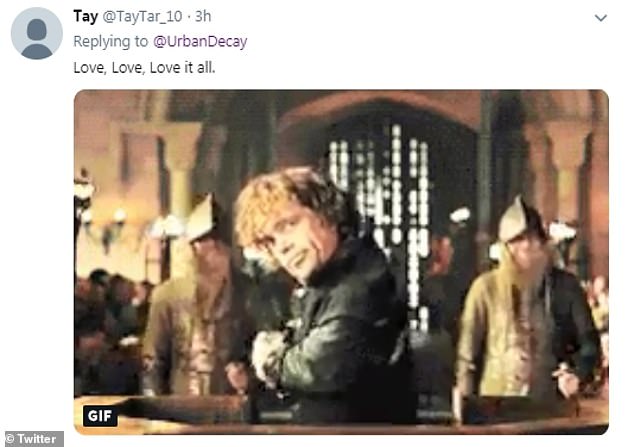 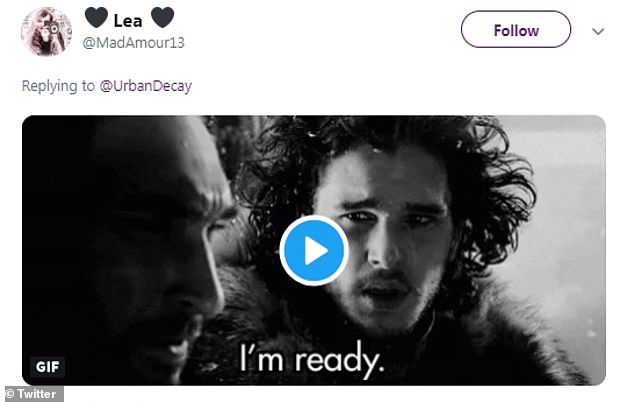 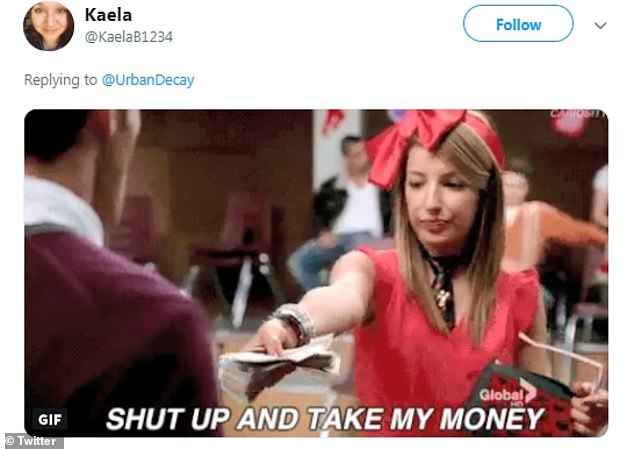 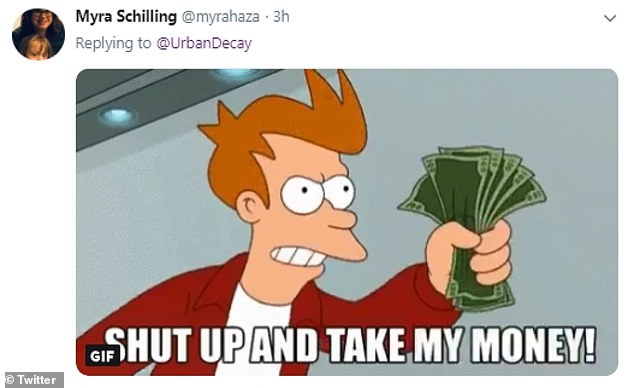 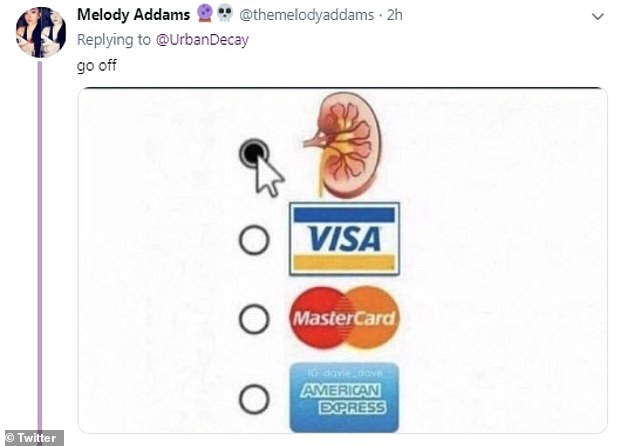 Excited: Many Twitter users opted to share their feelings about the collaboration in the form of a gif, with a few selecting options from Game of Thrones in keeping with the theme

Last but not least, there is the Dracarys Lip & Cheek Stain ($26), which the brand says is ‘inspired by the High Valyrian command for “dragonfire”’ and is intended to ‘represent confidence and power’.

‘This universally flattering Targaryen red shade gives you the perfect see-through flush on lips and cheeks,’ a statement explained.

Fans of both the brand and the show certainly seem thrilled with the collection’s commitment to the theme, with several people taking the time to praise Urban Decay for the range.

‘THIS is how you do a collab!’ one person tweeted, while adding several clapping hand emoji to applaud the range.

‘Thank goodness it’s actually a good brand of makeup doing these themes!’ another added. ‘Nothing more disappointing than a great idea promoted by a c**ppy product!’

‘Goodbye money!’ Many people expressed mock fury at the brand for forcing them to spend so much of their money on new products

Others chose to jokingly chastise Urban Decay for forcing them to spend so much money on new products, with one lamenting: ‘I need to hit up the Iron Bank for a loan because I need the whole collection!’

Another piped up: ‘Want the whole collection, and will be waiting not so patiently.’

Many Twitter users opted to share their feelings about the collaboration in the form of a gif, with a few selecting options from Game of Thrones in keeping with the theme.

Jon Snow, Tyrion Lannister, and Cersei Lannister all featured among the gifs used, as well as Daenerys’s dragon Drogon.

The launch of the new Urban Decay collection comes just a few weeks before the latest and final season of the show is set to hit screens on April 14. Season eight will feature just six episodes, however they will each have a longer run time than any of the previous installments, with the final two clocking in at around 80 minutes each.

END_OF_DOCUMENT_TOKEN_TO_BE_REPLACED

END_OF_DOCUMENT_TOKEN_TO_BE_REPLACED
We and our partners use cookies on this site to improve our service, perform analytics, personalize advertising, measure advertising performance, and remember website preferences.Ok