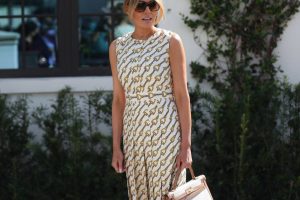 Melania Trump has cast her vote in the US election wearing a designer outfit worth more than $30,000.

The First Lady of the United States opted not to wear a face mask as she headed to the ballot box in Palm Beach, Florida on Tuesday.

She paired the pricey dress with a white and tan Hermes Kelly bag, named after Princess Grace Kelly of Monaco, worth around $23,680 and nude pointed Christian Louboutin pumps costing $900.

Wearing her hair in a stylish updo, Melania completed her outfit with a pair of signature dark sunglasses.

The First Lady was reportedly the only person not wearing a mask when she cast her vote, however, her spokeswoman said she had been the only one there to vote at the time, Fox News reports.

According to spokeswoman Stephanie Grisham, Melania had been the only person inside the polling booth centre besides her staff and poll workers, who had all been tested for coronavirus.

Grisham said those inside the polling booth had kept away from Melania “because of social distancing and the privacy” voters get.

Unlike the 2016 election, Melania did not vote alongside her husband, who cast his ballot in Florida last week.

“It’s Election Day so I wanted to come here to vote today for the election,” she told reporters of her decision to vote solo.

Melania’s decision not to wear a mask goes against an emergency order enacted in Palm Beach making face coverings mandatory in public places and government buildings, NPR reports. The US has been hard hit by the coronavirus pandemic, with 9.4 million cases reported and 232,000 deaths.