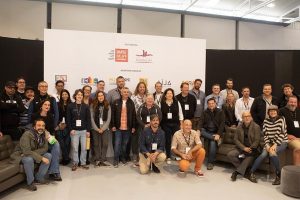 As a sector grows, it adds more specialist infrastructure. Taking place Oct. 20-21 and organised by the Feria de Valladolid and Spain Film Commission, Spain’s Shooting Locations Marketplace is a case in point and part of Spain’s drive to consolidate as one of the world’s foremost big shoot locales.

The Marketplace is a case in point, coming as the value of locations has grown to become a basic consideration in a highly competitive new content scene. “There’s an exponential increase of productions that has raised the need to set each story in a unique location which meets both producers and directors criteria,” Rosado added. Following, seven takeaways:

“I will restate what’s obvious, which is that tax incentives are going to drive filming to wherever region in the world wants filming,” said James Lin, Universal Picture’s VP of physical productions, opening the Shooting Locations Marketplace. Speakers constantly insisted on the issue at panels and when talking to Variety. “Tax incentives now are the big driving factor,” said Lin. That said, “the great filmmakers out there are the ones who inspire us to basically want to travel to real locations.” These can “exude feelings of emotion, speak another point to the story, become part of the story plot.”

“I think what we can find in real life is often so much better than what can be built and so much more interesting,” Meghan Beaton, Norway national film commissioner, said at the Marketplace. “Audiences are craving unique stories, from different places with different looks.”

New locations unveiled at the 2022 Marketplace ranged from abandoned theme parks to jails, airports, runways, military bases and ports. The Marketplace also gave attendees the opportunity to reflect on the attractiveness of Spanish locations. These stand out on maybe three counts, they said. First, Spain stretches 1,500 miles from the often snowbound Pyrenees to the tropical Canary Islands. “The vast variety of locations in Spain make it a very attractive place to film,” said Kate Glover. “The diversity of locations within Spain is incredible. There is a huge amount on offer and seemingly a great willingness to solve problems and make filmmaking possible. When looking at the uniqueness of Spain I would have to focus on the Canary Islands,” Ledgerwood agreed.

A Panoply of Heritage Sites; Compactness

Then there’s Spain’s huge history. “Spain has the luxury of having both beaches and castles. It can be easily cheated for multiple locations in Europe and even is an easy double for Los Angeles. By having dedicated film commissions to each region it means it’s very easy to find out what works and what doesn’t very quickly,” Glover added. Third, there’s the compactness and superb modern communications of mainland Spain. Spain is smaller than the state of Texas, noted Fernando Victoria de Lecea, president of Spain’s ProFilm line producer body.

The Big Challenge (As Around the World)

Containing costs and promoting sustainability, big shoots are increasingly looking to settle in less destinations for a longer time, combining location and studio work here. Currently, in mainland Spain, incentives are capped at €10 million ($10.5 million). “Shoots which can spend €40 million [$42 million] in a single territory don’t want to come to Spain where we’ll only return €10 million, while other countries return much more,” said Victoria de Lecea. Spain also needs more studio facilities. It is now addressing both issues. According to a ProFilm study, in 2021, foreign shoots spent €263 million ($276.15 million) in Spain, double the 2016-19 average, thanks in part to a new incentives cap, raised to €10 million in 2021. Now ways of increasing incentives once more are under parliamentary review. Alicante’s Ciudad de la Luz, its most ambitious studio complex ever, formally reopened in July.

The conference program focused on issues such as sustainability, logistics and incentives, with input by professionals from the U.S., Abu Dhabi, Malta, U.K., India and Spain. For its third outing, in 2023,  Shooting Locations aims now to hike attendance, bringing in location managers and destination reps of “all profiles,” enriching debate by offering “broad, heterogeneous and attractive content,” its organizers announced after this year’s edition.

John Hopewell contributed to the article.