Kobe Bryant was posthumously inducted into the Naismith Memorial Basketball Hall of Fame on Saturday as part of the Class of 2020, with his wife, Vanessa Bryant, accepting the honor on his behalf.

Joined onstage at the ceremony in Uncasville, Connecticut, by Michael Jordan, whom the late basketball star idolized as a child, Bryant spoke movingly about the love her husband had for the game and his family more than a year after the Los Angeles Lakers star was killed in a helicopter crash.

“I used to avoid praising my husband in public because I felt like he got enough praise from his fans around the world and someone had to bring him back to reality,” she said at the start of her speech. “Right now, I’m sure he’s laughing in heaven because I’m about to praise him in public for his accomplishments on one of the most public stages. I could see him know, arms folded, with a huge grin saying, ‘Isn’t this some shit?’ He’s still winning.”

“I wish my husband was here to accept this incredible award. He and Gigi deserve to be here to witness this. Gigi would be so proud to watch her daddy get enshrined in the Basketball Hall of Fame,” Bryant continued.

The five-time NBA champion was elected into the Hall of Fame in his first year of eligibility just three months after he and his 13-year-old daughter, Gianna, were killed in a helicopter crash in Southern California along with seven others.

The formal induction ceremony, which also welcomed Tim Duncan and Kevin Garnett into the Hall of Fame, was supposed to be held last year, but was postponed due to the COVID-19 pandemic.

In her speech, Bryant said that, in her late husband’s absence, she hoped to give thanks to all those who touched his life on and off the court.

“There will never be anyone like Kobe. Kobe was one of a kind,” Bryant said. “He was special, he was humble off the court but bigger than life. To all of our close friends and family that have been present for my girls and I, thank you. That list is long and it takes a village but know that your kindness and love does not go unappreciated. I know that Kobe is thankful that you’re all coming through for his girls. We love you and are forever grateful for you.”

She was joined at the ceremony with her three other daughters ― Natalia, 18, Bianka, 4, and Capri, 22 months ― with the group visiting a special exhibit at the Basketball Hall of Fame museum in Springfield, Massachusetts, honoring Kobe ahead of the event.

“If my husband were here tonight, he would have a long list of people to thank that helped inspire him and equip him to be in the Hall of Fame. Family, friends, mentors, the Lakers, teammates, muses and opponents,” Bryant continued. “This is one of the hard parts of not having him here. At the risk of leaving anyone out, I can only say thank you. To all those who helped him get here, you know who you are and I thank you on his behalf.” 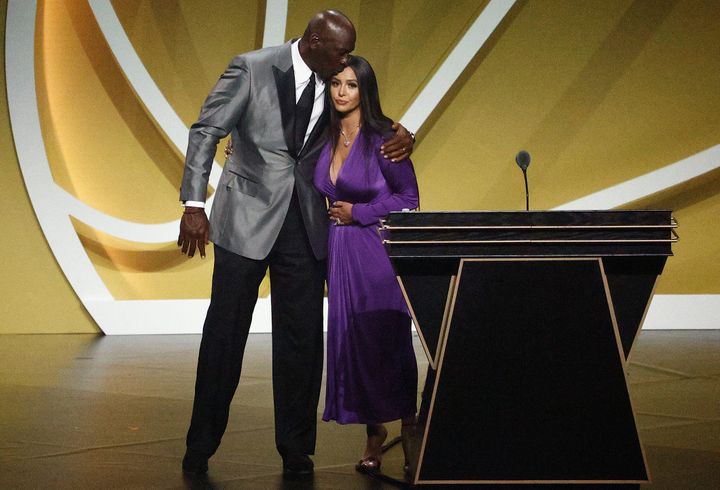 In a moment that made Jordan and the audience crack a smile, Bryant then lovingly mentioned her husband’s famous work ethic and competitive drive.

Staying remarkably poised through the majority of the speech, Bryant began to tear up as she read aloud a message she wrote to Kobe in the style of his “Dear Basketball” letter, announcing his retirement from the sport back in 2015.

Bryant concluded her remarks by recalling a phrase of Kobe’s that has long since stuck with her: “If you’re going to bet on someone, bet on yourself.”

“I’m glad you bet on yourself, you overachiever,” she said, as her voice began to crack. “You did it. You’re in the Hall of Fame now. You’re a true champ. You’re not just a MVP, you’re an all-time great. I’m so proud of you, I love you forever and always, Kobe Bean Bryant.”