Home » Lifestyle » Viewers stunned over chocolate tower on Bake Off: The Professionals

Viewers stunned over chocolate tower on Bake Off: The Professionals 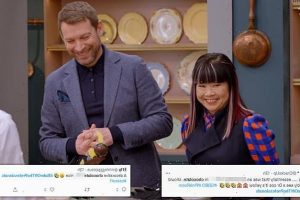 Choc’s going on? Bake Off: The Professionals contestants leave judges in hysterics with a VERY rude-looking chocolate tower – after being asked to make a ‘sophisticated sculpture’

A team left the Bake Off: The Professionals judges in hysterics last night after crafting a ‘phallic’ looking chocolate tower after being asked to make ‘sophisticated sculpture’.

Bakers Aline and Nina, originally from Brazil and now living in Kent, appeared on the Channel 4 programme last night representing Aline’s bakery The Pink Kitchen where they were tasked with making 36 identical Mont Blanc tarts.

As part of the Secret Challenge, the contestants were also asked to craft a sophisticated ‘chocolate sculpture’ which ‘represented them as a team’.

However Aline and Nina left the judges Benoit Blin and Cherish Finden howling with laughter after presenting their chocolate tower – which Benoit commented was ‘very phallic.’ 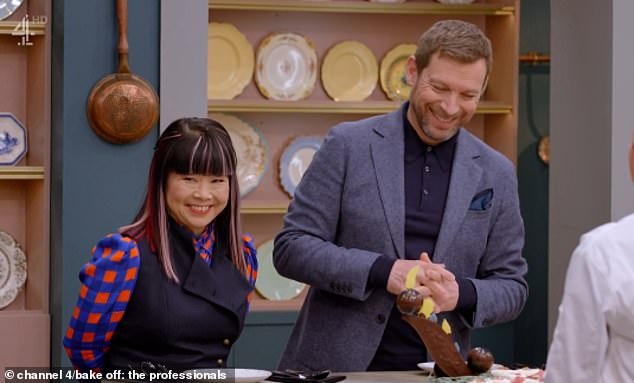 Bakers Aline and Nina, from Kent, left the Bake Off: The Professionals judges in hysterics last night after crafting a ‘phallic’ looking chocolate tower after being asked to make ‘sophisticated sculpture’

Appearing on the programme, Aline described how she had left behind a patisserie career in London to start The Pink Kitchen in Kent 10 years ago.

Surge in demand for her cakes recently lead her to take fellow Brazlian Nina under her wing.

Aline called the team ‘very organised and we have fun also – we have a little laugh and fun. We enjoy it at the same time.’

The duo were first tasked with making the 36 identical French tarts.

Benoit explained: ‘To get the measure of your knowledge and experience right from the off, we’d like you to make today, 36 identical and individual Mont Blanc tarts.’

He went on to describe how he was looking for ‘a lovely, sweet almond pastry, almond cream, crispy meringue, finished off with a chestnut vermicelli.’

All the bakers were given was the necessary equipment and ingredients for the task.

Meanwhile Cherish said: ‘We also want you to make one chocolate amenity each. 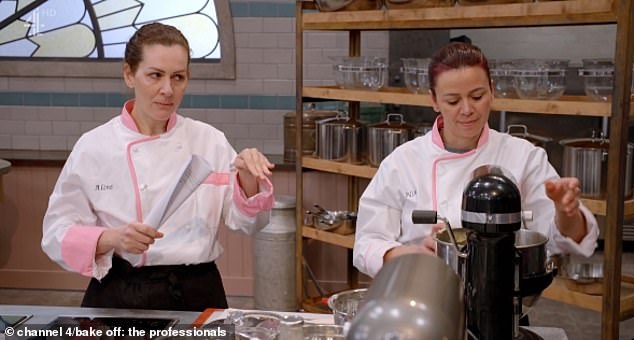 ‘This sophisticated chocolate sculpture is often given to the VIP. Please make sure it reflects you as a team and makes me smile.

Benoit explained: ‘The chocolate amenity is the opportunity for them to be very creative, show us a little bit of yourself with a beautiful little simple design.’

They had three hours to complete the challenge. 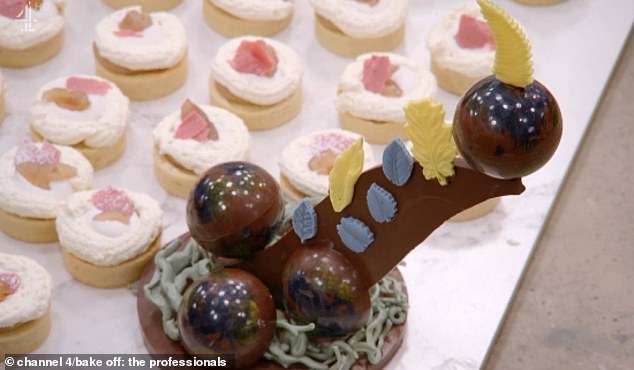 The judges had asked for a ‘sophisticated’ chocolate sculpture which would also ‘show a little bit’ of the team with a ‘beautiful, simple design’ (pictured, Nina and Aline’s sculpture)

Benoit called the challenge an ‘eight out of 10’ in terms of technicality, calling it: ‘It’s one of my favorite to eat, who doesn’t love a Mont Blanc?

As the judges visited their working station, the pair described how they planned to construct the tarts – but in a crucial mistake, they said they planned to put meringue on the outside instead of the chestnut cream.

And it didn’t get any better for the team as the task progressed, with the duo describing their plan to put their meringues in the fridge – without baking them at all. 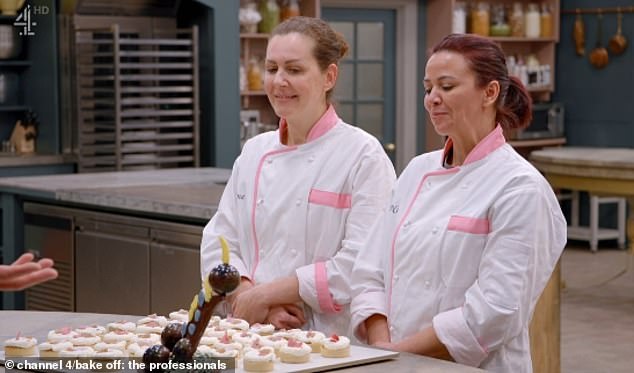 Meanwhile they confessed they were struggling to come up with ideas for their chocolate sculpture, with Aline admitting it was ‘a bit stressful.’

Ultimately they crafted a chocolate wave, with colourful leaves, nodding to their Brazilian heritage, and several balls stuck to it.

As the challenge progressed, the women confessed they were concerned about timing, with Stacey even joining in to help with rolling pastry.

However Aline and Nina were immediately disappointed, with Benoit telling them their pastries ‘didn’t look like a Mont Blanc.’

He said: ‘I’m far from my trip to the Alps unfortunately. The amenity…remind me what it is supposed to be representing?’ 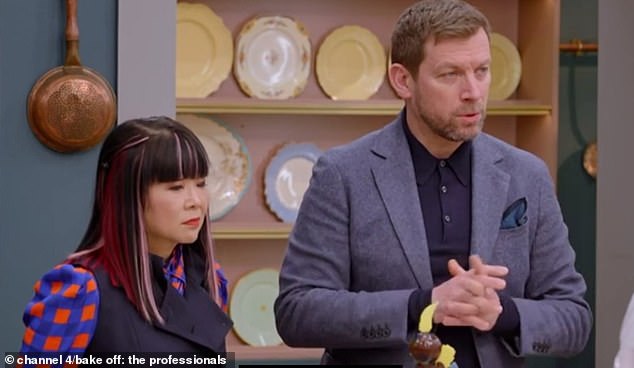 Aline explained: ‘We tried to represent Brazil [with] the colours green, blue and yellow. [The balls] symbolize the earth.’

Benoit added: ‘We might as well say, it is very phallic. I’m not sure what I’m looking at to be honest.’

The group broke down in laughter, with Benoit and Cherish both giggling at the site of the sculpture.

Viewers were left in hysterics over the moment, with one writing: ‘A decorative chocolate d***, nice.’

A third added: ‘Nina now completely unable to see anything but a giant chocolate p****.’