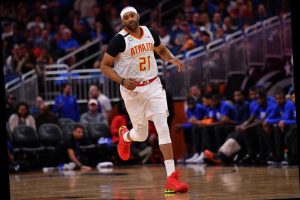 Carter continued, "If there was any disappointment because of the season — any of that — it was kind of easier to put it aside and handle it that way. It's like, OK, it's something bigger than my career. … It's unfortunate, but with the coronavirus taking people's lives rapidly, that's the big picture in my mind."

"So I was able to put the weird ending — the abrupt stoppage of play, to an ending — aside for the bigger picture."

Carter — the first NBA player to ever play in four decades — was selected by the Toronto Raptors in the 1998 NBA Draft. He played with eight teams throughout his career.

His last team, the Hawks, paid tribute to him on Twitter, writing, "Thank you, Vince ❤️."