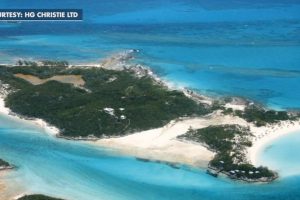 Morning Business Outlook: Private 35-acre Saddleback Cay Island in the Bahamas, which was featured in the failed Fyre Festival’s promotional video, on the market for $11.8 million; Tesla reports over 95,000 cars were delivered during the company’s second quarter.

Andy King is thirsty for success.

The events producer for the failed 2017 Fyre Festival has landed a new partnership with Evian water. He was thrust into the spotlight when he said in a Netflix documentary he was willing to perform oral sex in order to ensure that festivalgoers were provided with the name brand.

The "Fyre" documentary was released last year, exploring how promoter Billy McFarland enticed people to pay big money to attend the festival in the Bahamas, when the housing and infrastructure were nowhere near ready to host an event that was billed as a luxury experience.

Evian did not immediately respond to a request for comment from FOX Business but said in a press release it "is honoring Mr. King by creating a custom Evian water bottle which includes a new slogan that states, 'so good you'd do anything for it.'"

The company launched a contest Friday, where 10 people can win a custom King bottle.

"Who's thirsty!?" King joked on Instagram. "On the anniversary of my doc, @evianwater is releasing a special bottle with a new slogan in honor of my infamous team spirit."

Evian is owned by the Danone Group. Its stock is up 15 percent on the year.

END_OF_DOCUMENT_TOKEN_TO_BE_REPLACED

END_OF_DOCUMENT_TOKEN_TO_BE_REPLACED
We and our partners use cookies on this site to improve our service, perform analytics, personalize advertising, measure advertising performance, and remember website preferences.Ok