Home » Lifestyle » 'Virgin River': Charmaine Is Making Jack Pay for Not Falling in Love With Her 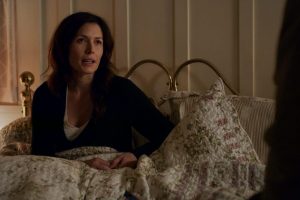 Netflix’s Virgin River is the perfect mix of Hallmark romance and soap opera drama. The series focuses on the small town of Virgin River, California, and its residents. When Los Angeles-born nurse, Mel Monroe (Alexandra Breckenridge), sweeps into town, she captures the heart of the town’s bar owner Jack Sheridan (Martin Henderson), who immediately extricates himself from his entanglement with hairstylist, Charmaine Roberts (Lauren Hammersley).

Now, after revealing her pregnancy to Jack after their breakup, Charmaine is making him pay in every way imaginable for falling in love with Mel instead of her.

Is Jack the father of Charmaine’s babies on ‘Virgin River?

With so much going on and the way that Charmine and her new finance Todd (Patrick Sabongui) are trying to shut Jack out of the twins’ lives, many people don’t even believe that Jack is the father of Charmaine’s babies. There is a theory running rampant amongst Virgin River fans that Charmaine went through IVF to conceive in an attempt to force Jack to be with her.

A Redditor theorized via Express,

Looking at Charmaine’s age and her saying this is her last chance at motherhood, it seems like she would have been going through in vitro without telling Jack and once she got confirmation of her pregnancy is when she timed her encounter with Jack to play into the timeline. She knew Jack didn’t want to be with her and thus would never want to have kids with her, so to trap him, she went ahead and got the pregnancy taken care of and linked it to Jack. Twins are also more common within vitro from what I understand because they try to implant as many eggs as possible to increase the chance of catching.

Though Charmaine was heartbroken when Jack ended their two-year relationship, fans are increasingly less sympathetic to her manipulative ways. Not only has she constantly made side remarks about Jack and Mel, but she and Todd are also now attempting to force Jack to turn over his paternal rights.

Though fans try and sympathize with Charmaine and her pain, the fact that she is standing with Todd when it comes to her and Jack’s babies are wearing on many fans, especially since it’s clear she’s not actually in love with Todd, she just likes the comfort of his influence and money.

Now that Charmaine has tied herself to Todd through marriage and he’s clearly trying to control every aspect of her life, we’re almost certain that the truth about the twins’ paternity will be revealed in Virgin River Season 4. While some fans believe that Charmaine went through IVF to get pregnant, others believe that like Charmaine’s storyline in the book, the twins are somebody else’s children.

Now Virgin River fans are speculating that Charmaine is pregnant with Dan Brady’s (Ben Hollingsworth), twin babies. As we know Brady is a former friend of Jack’s and he’s been arrested for shooting him. “I don’t think the babies are Jack’s,” one Redditor explained via Express. “Almost everything time there is a scene with Charmaine discussing her pregnancy, the immediate following scene is of Brady. Charmaine was clearly jealous of Mel in the first season (and still is) and angry at Jack for not loving her (still is). So it would make sense that in a moment of bad judgement (and desire for revenge) she would sleep with someone else as a way to ‘get back at Jack.’ And who better to sleep with than Brady? Especially since he is also mad/resentful towards Jack… he would certainly go along with it.”

We’ll just have to wait to find out.