The public will vote on a constitutionally enshrined First Nations Voice to parliament as early as August, with Indigenous Australians Minister Linda Burney revealing the federal government will introduce legislation to parliament in March setting up the referendum.

Burney said that the official Yes campaign is likely to launch late next month, meaning the campaign will ramp up just weeks before parliament votes to set the referendum date. 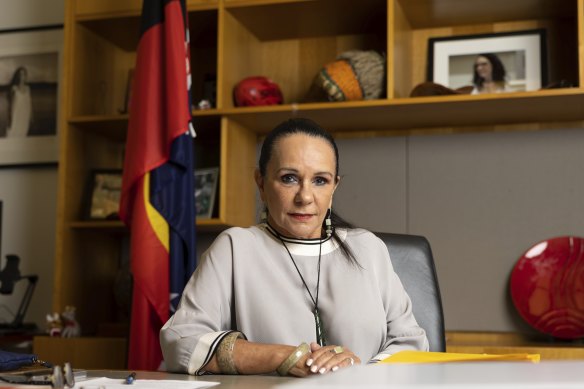 Indigenous Australians Minister Linda Burney has laid out fresh details about the timeline of the referendum. Credit:Alex Ellinghausen

“Once that all mobilises, I think we’re going to have a country that’s ready for change,” Burney told this masthead in an exclusive interview laying out the timeline.

Burney confirmed the enabling legislation will be introduced to parliament “sometime in March” before it goes to a parliamentary committee to scrutinise for six weeks.

The government would then aim to pass the legislation through parliament in May, allowing the public vote to be held as early as August – although it could be held as late as November.

“It’ll go off to a committee for six weeks, and then it will come back into the parliament for debate and decision, which will really be the starting gun for the referendum,” Burney said.

Burney said the Yes campaign would be an “alliance model” bringing together different groups and people, including the Uluru Dialogue and From the Heart organisations, as well as the Uphold and Recognise organisation, which makes the conservative case for recognising First Nations people in the Constitution.

The Indigenous Australians minister said she was “hopeful” that Federal Opposition Leader Peter Dutton would support the Yes campaign, despite him recently arguing that there was “building bewilderment” at the lack of detail around the proposal.

Dutton said the Liberal Party would finalise its position in the new year.

“I think I have a good relationship with him. I think it’s a very open relationship between [him] and the prime minister,” Burney said.

“He has said he’ll make his decision come February. But I just hope that he reflects over summer, just how important it is.

“I hope that what Peter Dutton ends up doing is [finding] a constructive way forward with this debate. And it’s a huge opportunity, really, for Peter Dutton and the Liberal Party to see that this is about the Australian people and bringing us together.”

She said she was “very disappointed” that the Nationals had decided not to support the Voice, but felt that it was not the “death knell” that some people claimed, and was still hopeful the party would reverse its position once more detail is released.

“I would have liked to have seen bipartisan support across the parliament because I think it’s worthy of that,” she said. “I truly believe that this idea’s time has come in this country.And I think we as a country are ready for it. And if some political parties aren’t, then that’s their business.”

The Albanese government has increasingly faced criticism, including from Dutton, that it has failed to release detail about the Voice.

Burney said she “hears” the criticism but countered that there was already plenty of detail. She promised that “there will be ample information out in the public prior to the referendum for people to make an informed choice”. But she conceded that the exact model would be settled after the vote, saying that was a matter for parliament.

“Those people that are wanting Is dotted and Ts crossed have their own agenda. I don’t know what it is.“

Burney repeated her assurance that the Voice would not have veto power over the parliament, a position backed by a government-selected group of constitutional experts.

“The sovereignty of a parliament is not affected,” she said.

“It’s an advisory body to the parliament and to the executive government. It won’t usurp existing organisations, and it will not administer programs.”

Asked whether the Voice would be able to table reports to parliament, Burney said: “We’re still working out how the Voice will interact with the parliament.”

While the government has committed to the body being representative with gender parity, it has not determined the process for electing the members.

A report on design of the Voice, led by Indigenous academics Marcia Langton and Tom Calma, recommended a 24-member panel with two members from each state and territory, as well as the Torres Strait, plus five members representing remote communities and one representing Torres Strait Islanders living on the mainland.

Calma and Langdon are on the working group which is advising the Albanese government on its referendum strategy. Asked whether the final model for electing members would be close to the one proposed by Langdon and Calma in 2021, Burney said it’s “not necessarily going to be a one size fits all” approach and suggested states, territories and the Torres Strait might have slightly different models.

Burney said there were “some very loud voices” in the campaign against the Voice.

“I think it’s OK to have different points of view, of course, we’re going to have to, but the arguments have to be factual. And they’re not,” she said.

Burney said many of the arguments against it were “a little ill-informed” including the one that claims a Voice to parliament is not needed because there are already Indigenous members of parliament such as herself.

As the debate heightened in 2022, Burney was increasingly subject to personal jibes including from Coalition senator Jacinta Price who accused her of flying into remote Aboriginal communities while “dripping with Gucci”.

“I just don’t take things too personally, frankly. And I don’t spend any time worrying about personal jibes or those sort of inferences,” Burney said.

“I do think this referendum should be above politics – and it is something to unify this country, not pull us apart.”