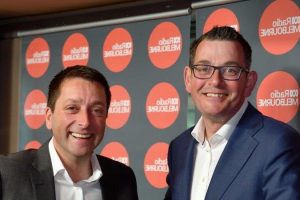 Daniel Andrews remains Victorian voters’ preferred premier but polling shows the return of Matthew Guy has halved the gap between the leaders of the state’s two major parties.

Labor is still on course to retain power next year despite voters drifting away from the government. A survey by Resolve Political Monitor conducted for The Age shows Labor’s primary vote has fallen from 43 to 38 per cent since the last state election. 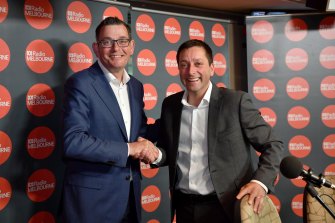 Daniel Andrews and Matthew Guy are due to face off for the second time at the 2022 election.Credit:Joe Armao

With a little over 12 months until Victoria is due to vote on November 26 next year, the polling shows Labor would lose a handful of seats but still win a third successive term in government.

In August, 50 per cent of voters preferred Mr Andrews as premier, compared with 24 per cent who believed then-Liberal leader Michael O’Brien would do a better job.

Since then, support for Mr Andrews has slipped 5 points to 45 per cent while Mr Guy has recorded an 8 percentage point increase on Mr O’Brien’s position. Remaining voters were undecided.

But the Coalition has again failed to capitalise on the slip in support for Labor and Mr Andrews. The opposition’s primary vote has dropped to 34 per cent, below the 35 per cent it recorded at the 2018 election. The 1-point fall can be attributed to the Nationals.

At the 2018 poll, the Coalition’s primary vote of 35 per cent resulted in a loss of 11 lower house seats and gave Labor a decisive return to power. Campaign strategists from both major parties believe the latest survey results could result in the Coalition picking up three to four extra seats, which would not be enough for it to win government.

The latest swing away from Labor has instead delivered gains to independents, with support for candidates not aligned with any major party almost double what it was in 2018.

Paul Strangio, associate professor of politics at Monash University, said the findings were “moderately encouraging” for Mr Guy and sent a warning to the major parties.

“What is noticeable is the high proportion of voters supporting other parties,” he said. “This not only points to disenchantment with the major parties but could potentially signal a considerable degree of volatility in voter support over the next 12 months.”

The survey also found that 58 per cent of Victorians expect Mr Andrews to lead Labor to the next election.

As part of its research, Resolve Strategic probes the reasons behind voting intentions. It has found that while Victorians felt Mr Andrews had worked hard and shown leadership during the pandemic, voters turned against him due to the lengthy lockdowns and loss of personal freedoms over the past two years.

People who intended to vote for the Coalition told pollsters they would do so because they had lost all faith in Labor and feared Victoria was no longer a “democratic state with individual rights”, not because they were necessarily supportive of the Coalition.

Resolve Strategic director Jim Reed said that as people emerged from the latest lockdown, they vented their anger towards the state government but were so far unwilling to switch their vote to the Coalition.

“The Coalition should be somewhat buoyed by the boost to Guy as it seems like voters are at least having a look at him and are willing to give him a chance,” Mr Reed said. “But he hasn’t won any vote share yet.”

Mr Reed also warned that the apparent boost to independent candidates was probably an example of voters being unable to decide whom they would vote for this far from an election.

While the survey indicated that the lengthy lockdowns had taken a toll on the government’s popularity, more than 80 per cent of respondents reported that they had followed the state's health orders in the past two months.

Wearing a mask and staying within travel limits had the highest adherence rate while one in five Victorians admitted they had sometimes failed to check in with a QR code.

The survey also found the majority of voters supported the Andrews government’s controversial COVID-19 vaccination mandates. Sixty-three per cent of those surveyed backed the policy, which will force about 1.25 million workers to be fully vaccinated by November 26 to go to work.

Only 20 per cent of Victorians disagreed with the policy, which is likely to prevent some of the world’s best tennis players from taking part in the Australian Open in January.

On Wednesday, Mr Andrews ruled out having unvaccinated tennis stars playing in the Open, insisting the state government would not apply for any exemptions for players who refused to be immunised.

“I’m not going to actually require people sitting in the grandstand, people working at the event to be vaccinated while players aren’t, so we’re not going to be applying for an exemption,” he said.

Mr Guy said he also supported the strict approach to vaccinations and that Australia should not “play favourites”.

"If we can't travel as ordinary citizens unless we are double vaccinated, nor should sports stars or celebrities."

The survey compiled responses from 1105 voters over two months.