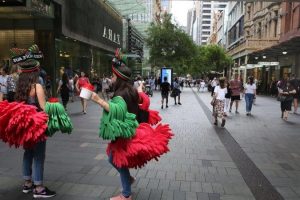 Wages growth has recovered to its pre-pandemic level but is being out-stripped by everyday cost pressures and the heaving property market, raising further questions over when the Reserve Bank will start lifting official interest rates.

As Prime Minister Scott Morrison urged people to snap up jobs on offer in the run-up to Christmas, the Australian Bureau of Statistics reported its key measure of wages growth showed a 2.2 per cent increase over the past 12 months. 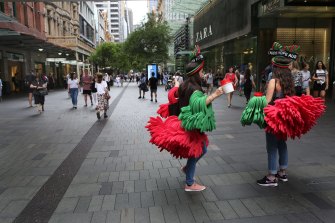 Scott Morrison encouraged people to take up jobs on offer in the lead up to Christmas.Credit:James Alcock

Wages rose by 0.6 per cent in the September quarter when Sydney, Melbourne and Canberra were in lockdowns to stop the spread of COVID-19.

It was the 34th consecutive quarter that annual wages growth was below the RBA’s stated aim of 3 per cent. The last time it was above 3 per cent was in March 2013 when wages in mining were growing at 4.2 per cent, healthcare wages were growing at 3.4 per cent and wages for utility workers were surging by 5.1 per cent.

Private sector wages increased 2.4 per cent over the year to September, the fastest rate in seven years, with the public sector trailing behind at 1.7 per cent.

The Reserve Bank wants to see higher inflation before hiking interest rates, with governor Philip Lowe yesterday confirming the central bank considers it “plausible” these conditions will not be met until 2024. However, major banks and a growing group of economists are tipping rates to rise as early as next year. Dr Lowe said this would require a rapid increase in wages to “3 point something” – beyond what he is predicting.

The bank started cutting interest rates in 2019, ahead of the pandemic, to push up wages growth.

Skills shortages could contribute to wage rises, and the October National Skills Commissions Internet Vacancy Index released on Wednesday showed a 7.8 per cent increase in online advertisements for jobs to 250,900. This measure is now at a 13-year-high.

Mr Morrison, who this week claimed the government would keep downward pressure on interest rates despite the RBA saying its plan was to eventually increase them, said the vacancy index was proof there were hundreds of thousands of jobs available ahead of Christmas.

Since NSW’s mid-year lockdown, more than 330,000 jobs have disappeared across the country while hundreds of thousands of people have left the employment market completely.

The Prime Minister said the end of lockdowns typically meant jobs growth and as restrictions ease towards the end of the year it was a good time for businesses to hire.

“Australia is reopening safely and to secure our economic recovery we want to see more Australians in jobs this Christmas and summer,” Mr Morrison said. “There’s hundreds of thousands of jobs available and we want you.”

“Australia has one of the world’s lowest death rates, highest vaccination rates and has seen one of the strongest economic recoveries. Businesses, workers and Australians looking for jobs should have confidence in the opportunities coming this Christmas and summer,” he said.

HSBC chief economist Paul Bloxham, who supports the RBA’s expectation of no rate rises in 2022 or 2023, said the data showed wages growth was well below the 3 to 4 per cent range that was “the norm a decade ago”.

“Today’s figures support the RBA’s dovish perspective and our own view on the cash rate outlook,” he said.

EY chief economist Jo Masters said the relatively slow momentum of wages meant time was on the RBA’s side.

“This will bolster the RBA’s confidence in rates being lower for longer than market expectations, with the data again demonstrating the stickiness of Australian’s remuneration arrangements,” Ms Masters said.