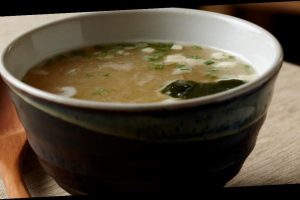 A waitress shared her shock after receiving an odd note from a customer after offering her free soup.

The unnamed server offered two diners a bowl of extra soup after they complained that they were still hungry.

But she was shocked by the hostile reaction after the woman accused her of selling her body.

And when she received the receipt, the customer had said she wouldn't leave a tip due to the 'sexual harassment.'

The waitress shared a copy of the bill on a Facebook group designated for servers and bartenders.

She wrote: "What would you do?All I did was get them an extra soup, the couple kept saying how hungry they were. One little bowl of miso to split seemed small to me.

"In my place of work the servers are allowed to give out free miso as they see fit.

"You know, don’t go crazy with it, but it makes them happy.)

"After I handed her the sushi roll she gets up and starts talking to the sushi chef about how I’m not selling food, I’m selling p****.

"She asks the other customers if they knew I was selling sex.

"She leaves the edemame and soy sauce thrown about the table, ice cubes and wet rice thrown into the chairs, with exact change, and this.

"Seriously she acted like I served the soup with my vulva."

The photo of the receipt has been attracted thousands of comments.

One person wrote: "W** that's backasswards. So instead of being grateful that someone was hooking them up with something free they show their ass by assuming you wanted them? Was it 2 females?"

Another joked: "Maybe she's from another planet where delivering food is part of a mating ritual."

Another server shared a similar experience, replying: "Had an older woman claim another drunk woman was hitting on her husband and it was “terrible for business”.

"Keep in mind they’re on the patio which is on a street where people walk with their drinks bar to bar.

"The drunk woman was just asking if the man had seen her purse that she left."

One waitress replied: "Yikes and I'm sure that's not the first time shes flipped out like that. ..gonna give herself a heart attack from the ridiculous stress shes putting herself through."

It follows one customer being accused of showing a 'lack of respect' after he spent eight hours in a restaurant, but only tipped £2.24.

He took advantage of an 'unlimited soup and salad' deal which also includes free refills of drinks, while playing games on his computer.

END_OF_DOCUMENT_TOKEN_TO_BE_REPLACED

END_OF_DOCUMENT_TOKEN_TO_BE_REPLACED
We and our partners use cookies on this site to improve our service, perform analytics, personalize advertising, measure advertising performance, and remember website preferences.Ok