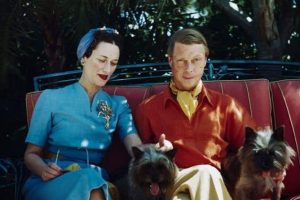 An extremely rare piece of royal jewellery owned by Wallis Simpson, the Duchess of Windsor, hasn’t sold at Christie’s Geneva. But what’s the story behind it?

Wallis Simpson was an American socialite who became the wife of Prince Edward, Duke of Windsor, after he abdicated the throne in order to marry her.

She had been married twice before meeting King Edward VIII but as a divorced woman, she was unacceptable as a British queen.

After abdicating to marry Wallis, the Duke of Windsor left Britain to live in France.

The couple became socialites and for decades their lives consisted of travelling and entertaining.

One of Wallis Simpson’s bracelets appeared at auction on November 9 for the first time since the 1987 Jewels of the Duchess of Windsor auction of her collection which fetched £36million.

That was a record at the time as the most pricey auction of a single-owner jewellery collection.

Wallis Simpson’s stunning diamond and ruby bracelet was estimated to fetch between £811,651 and £1.6million but the piece, which was gifted to her by the Duke of Windsor for their first wedding anniversary, did not sell.

“The Duchess of Windsor’s extravagant diamond and ruby Cartier bracelet, was a gift from the Duke of Windsor on their first wedding anniversary.

“While many women might expect a paper-themed gift to mark a first wedding anniversary, the Duke had famously abdicated the throne in order to wed the twice-divorced Wallis Simpson.

“And the rubies on this cuff bracelet are said to mark the passion, love and courage shared between these disgraced royals,” he explained.

Another rare royal jewel which went at auction at Christie’s is a piece owned by France’s last Queen Marie Antoinette.

Marie Antoinette’s pair of diamond bracelets were hidden once she was taken prisoner in Paris and only reappeared after she was beheaded.

The two Marie Antoinette bracelets were sold by a European royal family for £6million after they were estimated to sell for up to £3million.

“This auction is a very rare opportunity to own jewellery belonging to the last Queen of France and the Duchess of Windsor, Wallis Simpson,” the diamond expert said prior to the auction.

After the auction, Tobias commented: “This evening’s auction was both shocking and fantastic.

“An amazing result for bracelets owned by Marie-Antoinette, who was confirmed as true royalty, while the Duchess of Windsor, who appeared more of an impostor royal, whose bracelet seemed to have lost its lustre, despite being fashioned from prized Burmese rubies and commissioned from jeweller to royalty Cartier.

“Newly uber-wealthy collectors still aspire to the magic and halo effect of royal provenance. The three regal bracelets which sold today once belonged to two of the most legendary and controversial royals in history, both self-proclaimed jewellery addicts,” he explained.