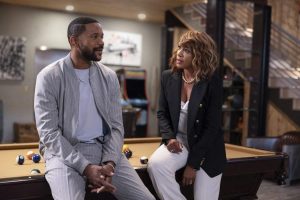 The Game is back with a new look, a refreshed cast, and a brand new city as the backdrop to its tale at the intersection of love, money, and sports.

Returning to airwaves via Paramount + streaming this November, the show’s relaunch features a mix of new players and original cast members, primed to offer a modern-day examination of Black culture through the prism of professional football. This time around, the players will tackle racism, sexism, classism, and more as they fight for fame, fortune, respect, and love – all while trying to maintain their souls as they each play The Game. Take a look:

Executive produced by original show creator Mara Brock Akil and new showrunner Devon Greggory, the new season of The Game finds the San Diego Sabers in a new city, Las Vegas, with a new lineup of players and WAGs heating up the town with their own unique sets of interpersonal dramas.

The new season of The Game premieres on Paramount + streaming on Thursday, November 11.