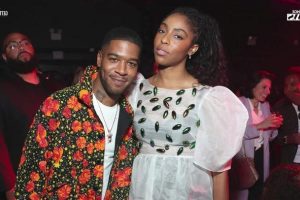 The recording process was long – not too long because I’ve done other animated things and I’ve recorded for years,” says Cudi. “It was just kind of fun to finally dive into this animated space.”

Scott “Kid Cudi” Mescudi and Jessica Williams are accomplished entertainers in their own right. In addition to a stellar music career, Mescudi has also appeared in Need For Speed, How To Make It In America, and Westworld. Williams, who is the former co-host of the 2 Dope Queens podcast, was also a correspondent on Comedy Central’s The Daily Show, as well as having a starring role in Fantastic Beasts: The Secrets of Dumbledore. Even with several years of acting under their belts, filming Entergalactic proved to be a different experience for both parties.

The two talented actors spoke to ESSENCE about recording vocals during a global crisis, as well as how they approached their roles in the film. “It’s a longer project,” Williams says of the television event’s production. “We would record in studios in different places because we recorded it at the height of the pandemic. So no one was really together, but one of the cool things that we did was that they recorded my face as well, so there was this sort of acting element, traditionally that I’m used to – but with voice it was really fun.”

Mescudi likened recording his lines for the character of Jabari to his many years in the music industry, as well as his appearance in an episode of The Cleveland Show in 2013.

“It was totally different than anything I’ve ever done because we worked on this thing for so long – it was like 3 years,” the 38-year-old tells ESSENCE. “The recording process was long – not too long because I’ve done other animated things and I’ve recorded for years.”

“It was just kind of fun to finally dive into this animated space,” he continues “I had always wanted to do voice acting, I always felt like I had the voice for it, I felt like if I had the opportunity I could do a good job, so it was really fun to just dive into that and just be someone else for a little bit in this animated world.”