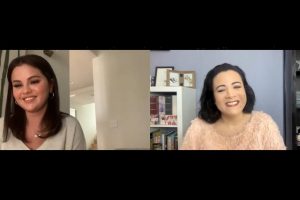 Variety’s second annual FYC Fest: The Shortlist kicked off Oscar voting this Thursday, Jan. 12. The virtual event featured 13 panels with the top contending filmmakers and artisans that were shortlisted by the Academy in the documentary film, international film, song, hair and makeup, animated short, live-action short film and visual effects categories including creators from “Wakanda Forever,” “Avatar: The Way of Water,” “Spirited” and a lot more.

Below, we gathered all the conversations with the short listers for your consideration.

Selena Gomez knew she wanted to craft an original song to complement her Apple TV+ documentary “My Mind & Me,” opting to share her journals with a close-knit group of collaborators to bring the song to life. “We didn’t even have a name for the documentary…. the song is definitely where everything came from,” Gomez remarked. Of the eponymous track, Gomez felt that much of her personal success has been linked to the reality and vulnerability extracted from hard times in her life, with hopes that those songs connect and resonate with others: “I find more joy in being vulnerable.”

Composer Alexandre Desplat discussed working with Guillermo del Toro and bringing his vision to life musically, starting with when both worked at Dreamworks Animation. In creating the song “Ciao Papa,” composer Desplat collaborated with del Toro and Roeben Katz to create lyrics where audiences can relate to both Pinocchio and puppet creator Geppetto. “There’s the apprehension and joy at the same time you’re going to discover a new world. But at the same time, you are leaving people that you love and a home,” remarked Desplat. “And it’s the same for the parents. They’re happy that the child goes away and becomes an adult. But at the same time, [there is] the apprehension that is going into dangers.”

“Wakanda Forever” artisans Ludwig Göransson, Steve Boeddeker, Geoffrey Baumann and Camille Friend all returned to work on the “Black Panther” sequel with the intention of honoring late franchise star Chadwick Boseman. Part of that tribute included Göransson and Boeddeker’s efforts to evolve the sounds of the Wakandans with new innovations, while simultaneously introducing the Talokanil with sounds drawn heavily from Mayan culture. Friend and Baumann discussed the teamwork involved between practical and visual effects in order to make them across seamlessly on screen, with the guidance and close collaboration of director Ryan Coogler overseeing the entire operation.

How did songwriter Diane Warren and Sofia Carson find each other to collaborate for “Tell It Like a Woman?” In a DM! “As a woman, as a musician, as an artist, my heart and soul lies in using my voice to lift up women, to do my part in that. And when I read the lyrics of [“Applause”], they moved me so deeply, and I was so grateful that she thought of me for this,” remarked Carson. The friends and collaborators discussed working together and bringing Warren’s uplifting song to life through Carson’s performance.

“We essentially cried together over Zoom, the connection was very immediate and we saw eye-to-eye very quickly,” composer Chanda Dancy said of meeting with director J.D. Dillard about scoring the biographical war film “Devotion.” Dancy remarked the unique process of being hired to score the film before production started, and discussed how the score took shape while the film was shooting, often exchanging text messages with Dillard while he was on set. She felt that it was necessary to best honor the real-life military aviators portrayed in the film with a score centered on grand orchestral sounds.

Drawing inspiration from Broadway hits like “Oliver!” and “Mary Poppins,” songwriters Benj Pasek, Justin Paul and Sukari Jones created “Good Afternoon,” a raunchy ensemble number in the film “Spirited.” “It feels like we’ve at least started to permeate culture in the most naughty sort of way,” said Paul, who doubled as an executive producer on the holiday feature with Pasek. “I literally had a parent at my kid’s school come up to me and be like… ‘My kid is saying good afternoon to me. How do I deal with that?’” An on-screen cameo during the track from English actress Judi Dench also became a fan favorite moment among viewers, which Jones revealed she pitched.

Artisans Simon Franglen, Joe Letteri and Julian Howarth played crucial roles in rounding out the musical and visual groundwork of box office smash “Avatar: The Way of Water.” Franglen recalled his close collaboration with director James Cameron, who had the composer read through scripts of the film to better understand the narrative purpose his score would serve, additionally highlighting the different challenges of creating soundscapes around water. Letteri and Howarth discussed how they employed all the tools at their disposal to evoke the best performances out of the cast to ensure they shine through even with VFX imaging.

An intimate conversation with Santiago Mitre, the director, writer and producer of “Argentina, 1985,” revealed the project was a lifetime in the making. Largely influenced by his mother’s work in criminal justice, Mitre told Variety he “understood the relevance for the reconstruction of democracy in Argentina” at a young age following the Trial of the Juntas. Mitre also stressed how the feature’s release prompted a reevaluation of political systems across the globe: “Every country has a wound in its history that needs to be healed through justice for building a better country, a better democracy and a better place for the people who live there and who will come.”

Director-writer Edward Berger did not want to sentimentalize war in “All Quiet on the Western Front.” Instead, he sought a balance between living this experience with Paul Baumer (Felix Kammerer) while still remaining objective about the events of WWII. “In Germany, there’s nothing to be proud of with that part of history,” Berger explained. “There’s just shame and guilt and the sense of responsibility, and to share that now with an international audience, that means a lot to me.” He added, “Germany’s not the victim in this story — other countries are.”

When writer-director Colm Bairéad finished reading “Foster,” the short story upon which “The Quiet Girl” is based, he couldn’t help but burst into “hot, childlike tears.” Hoping audiences would feel the same, Bairéad adapted the story to screen, placing weighted emphasis on casting and locations to immerse viewers in the perspective of the film’s 9-year-old protagonist. Minimalistic scoring — and at times, silence — were also utilized to draw attention to the actors’ performances: “Even the temp score that we had used had been really sparing. We always knew that we didn’t want the film to emotionally lead the audience too much.”

Writer, director and producer Alejandro Inarritu looked inward when determining the universal themes that would guide viewers through his latest feature epic, “Bardo, False Chronicle of a Handful of Truths,” reflecting on his own life experiences as well as concepts of love, death, art, success and fatherhood. “Some things you put in the page, but then when you suddenly confront how to flesh them out, how to materialize some abstract dreams and emotions and feelings, it’s a challenge,” Inarritu told Variety. The runtime of the first cut exceeded four hours, at which point Inarritu was tasked with consolidating his passion project while maintaining the narrative’s dream-like uncertainty.

Animated Short: ‘The Boy, the Mole, the Fox and the Horse,’ Charlie Mackesy (Author, Co-Director)

To “The Boy, the Mole, the Fox and the Horse” author Charlie Mackesy, his book is more of a “long conversation between characters.” “Not a huge amount actually happens, but I think what happens mainly is internal and discursive,” he told Variety. “They discover things about each other and themselves and existence.” When adapting the beloved illustrated book into an animated short film, Mackesy and co-director Peter Baynton had to “go deeper with the characters and discover a real narrative and a purpose to their journey.” Another crucial element for the short: emulating the book’s illustration style. “Our journey really was creating ink and watercolor drawing into an animated form, and keeping the spirit of the book alive and the messages within it,” Mackesy said.

For VFX supervisor Jason Billington, the visual effects in Ron Howard’s “Thirteen Lives” needed to be subtle enough so it wouldn’t “take the viewer away from the emotional story.” “When it comes to visual effects, it’s always been, we remain hidden,” he told Variety. Billington explained that the underwater sequences were filmed on practical sets rather than heavily relying on VFX. “The biggest thing that we had to do — which was probably the bulk of the work on the entire film — was to have them feeling like they weren’t going through a set.” he explained. “All those underwater scenes where the divers are flowing through to get to the boys or flowing out of the cave… they’d all have to be fighting with [or against] the current… And we had to visually show that.”