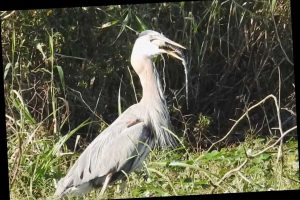 How ‘unbearably cute’ Canadian marmots were saved thanks to ski slopes

See it: Deer, bears and other wildlife use Utah’s animal-only bridge

A wildlife photographer has captured the shocking moment when a great blue heron gulped up a baby alligator, jaw to tail.

The photographer, Shellie Gilliam, told Florida’s NBC affiliate that she’s often scoping out the wildlife around the Lake Apopka area north of Orlando, but the scene is usually far tamer.

When she spotted the heron, she assumed it was having its usual breakfast.

“I first thought it was a large fish or a greater siren, but upon closer review through my camera, discovered it was a large juvenile alligator,” she told the station.

The bird then flew off with the creature in its beak and settled down to eat. Gilliam watched and photographed as the bird ate the alligator to completion.

“I had to walk a few hundred yards back to where he landed, whew. Once in a lifetime experience,” said Gilliam, who shared the footage on Facebook.

It wasn’t the first time wildlife has been captured biting off a bit more than it can chew. A python in — where else? — Florida, was filmed eating a white-tailed deer whole. It later regurgitated the dead fawn.

And in a rare win for the prey of the world, a photographer recently captured the moment when an eel burst out of a heron’s stomach in midair. Snake eels are known to perform daring escapes by slicing open their predator’s stomach with the pointed tip of their tails, which are generally used for digging.

END_OF_DOCUMENT_TOKEN_TO_BE_REPLACED

END_OF_DOCUMENT_TOKEN_TO_BE_REPLACED
We and our partners use cookies on this site to improve our service, perform analytics, personalize advertising, measure advertising performance, and remember website preferences.Ok