Home » Lifestyle » “We feel helpless and heartbroken”: Ukrainians in the UK share their stories

“We feel helpless and heartbroken”: Ukrainians in the UK share their stories 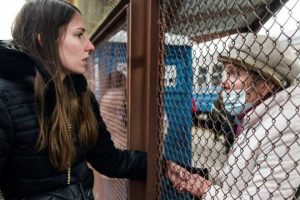 Stylist spoke to Ukrainians in the UK on what it’s like to watch the conflict unfold from another country.

On the sixth day of the Russian invasion, which began in the Donbas region in the south-east of the country on 24 February, missile attacks, street fighting and a “special alert” of Russian nuclear weapons continue to face Ukraine.

Following the first round of peace talks between representatives of the two countries on the Belarus border, satellite images showed Russian forces advancing on the capital city, Kyiv, in a convoy of armoured vehicles, tanks and other military equipment spanning more than 40 miles.

More than 500,000 people have fled Ukraine to neighbouring countries including Poland since the start of the conflict, the UN’s refugee agency has confirmed, and at least 352 people have been killed, including 14 children.

Presently, only people with “immediate family members” settled in the UK will be allowed to enter the country – making it impossible for many refugees to travel here.

Ukranians that currently reside in the UK are faced with watching terror unfold in their home country, not knowing what they can do and if their families will be able to flee safely. Stylist spoke to two Ukrainian women in the UK about how the crisis is affecting them, and how they’re maintaining hope for de-escalation.

Families, including women and children, have been fleeing war-torn areas of Ukraine as missile attacks and street fighting continue

“I feel entirely helpless being so far away”

“I woke up andthe first thing I saw on my phone was the message from my mom saying the war had started,” Nadya, a 31-year-old Ukrainian living in Oxford tells Stylist. “I’ve spent the days since glued to the news feed, checking in on my family and friends each hour with barely any sleep.”

“Knowing that the people that I love are forced to hide in shelters while sirens and explosions have become a part of their daily lives is beyond heartbreaking, and I feel entirely helpless being so far away.

“Thankfully, many have relocated to safer western regions or managed to get to Poland or other countries. But the ones who decided to stay in Ukraine are hiding in shelters or at home in-between bearing walls. They witness shootings and explosions everywhere, some are running out of food or water, but no matter the circumstances, their spirits are high.

“I have never been so proud of my country and its people, and I’ve never seen them so united. Thousands of people gathered around the same goal: defending our freedom. Volunteers help deliver essentials to those in need and assist with shelter and relocation. Others are donating funds, promoting fundraising for the Ukrainian army and humanitarian aids, and helping in every way possible. The Ukrainian spirit is truly unbreakable.

“I hope and urge citizens of Russia and Belarus to show their support by joining peaceful protests. We have seen their support on social media, but it is just not enough – joining protests has the full potential to drive the needed attention to stop this bloodshed. People from all over the world need to support Ukraine and contribute to our victory by sharing verified information, urging their governments to take action, or helping financially.”

“When the news broke, it felt like I was sleepwalking,” says Emma, a Ukrainian living in London. “It didn’t feel real. Yes, we have had conflict in the east of Ukraine for the last eight years, which has been devastating, and frustratingly not covered by the media.

But I never imagined I’d wake up to the declaration of war.”

“It has been heartbreaking to see Dnipro, the city I was born in and where my parents met, now under attack, with people sheltering in metros and newborn babies from neonatal intensive care being cared for in bomb shelters.

“But above all, hearing my mum cry because she felt our house shake from the impact of a missile that hit our airport in Ivano Frankivsk was heartbreaking, and left me feeling totally powerless.

“My hope is for Ukraine to be free, for the war to stop, and for some sort of agreement to be reached. Enough is enough.”