Spoilers ahead for Riverdale Season 3, Episode 7. After weeks of sporadic sightings of the Gargoyle King on Riverdale without any real clues as to who he is or where he came from, fans may finally have an answer about why people are seeing him all of a sudden. It all has to do with the Gargoyle King’s connection to Fizzle Rocks.

Season 2 had Jingle Jangle, but the drug of choice for Season 3 is Fizzle Rocks. They look sort of like Pop Rocks, but, you know, laced with narcotics. Fizzle Rocks are what the Midnight Club took that fateful night when Principal Featherhead died during a game of Griffins and Gargoyles. And, considering that a young Hiram Lodge was the one who provided the drugs that night, it’s not surprising that he’s mixed up in everything again now.

While trapped at the Sisters of Quiet Mercy, Betty discovers that Hiram Lodge is essentially testing the drugs on the unwitting girls who live there. Of course, because it’s Hiram, it’s shadier than that. He seems to be disguising the drugs under the pharmaceutical name Bullio Lapis, which is being prescribed to Betty and probably many others in the home. Bullio likely comes from the latin "bullire," which means "to bubble," and Lapis is a kind of rock. So Betty is being prescribed bubble rocks, hm? Sounds familiar. 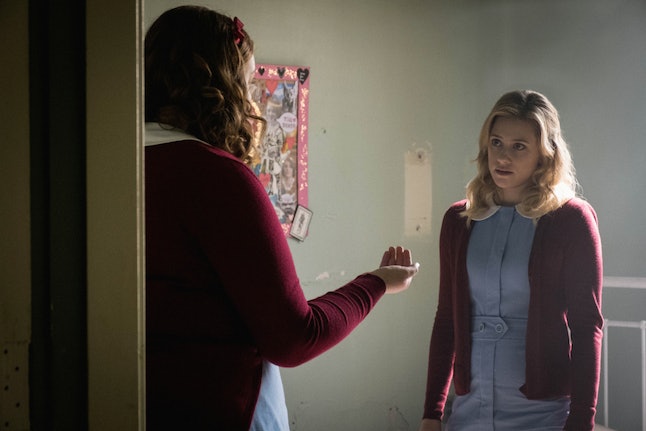 Initially, Betty refuses to take the Fizzle Rocks, which are being given to the girls as just "candy" for a treat. But she later has them forced on her before she’s taken to meet the Gargoyle King. That’s right, the Sisters apparently have the King just chilling in their basement, and they send misbehaving girls in to be taught a lesson.

Now, Riverdale creator Roberto Aguirre-Sacasa did tell Us Weekly that the Gargoyle King is "most probably a guy in a mask," but he could be both a real person and also a hallucination. If Hiram is the Gargoyle King, as many have suspected, he’s far too busy to sit in a room and terrify teenagers. Perhaps he’s hired someone to do it for him. Meanwhile, it’s worth noting that Betty has what appears to be a hallucination of the Gargoyle King only after she’s taken the Fizzle Rocks. Perhaps she did see a person dressed as the King in the room and the traumatic experience burned the image into her brain so that now whenever she’s on Fizzle Rocks she’ll hallucinate him.

The only plot hole seems to be that the "Fizzle Rocks cause Gargoyle King hallucinations" theory is that not everybody who’s seen the King has been on Fizzle Rocks — or so they think. What if Hiram has been poisoning the town’s water supply with trace amounts of Fizzle Rocks? Reddit user dcfb236016 pointed out that in the Season 3 premiere, you can see a sign that says, "No Swimming After Labor Day." Is that when Hiram started poisoning the water?

It would explain why Veronica hasn’t had any hallucinations, because presumably the Lodge household has filtered water for this sake. Now that Veronica has moved out, will she be susceptible? 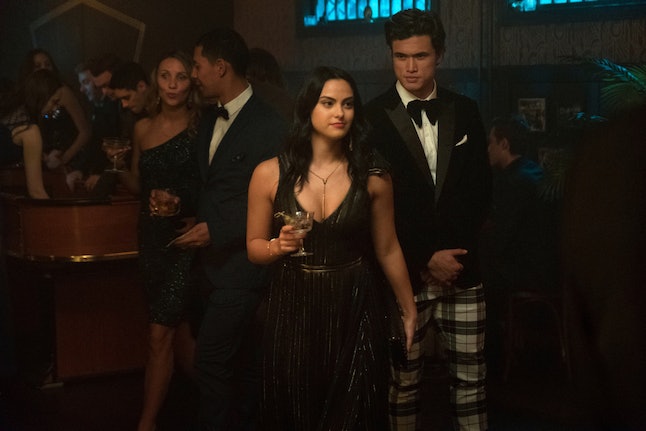 It’s unclear what Lodge’s motive would be to test Fizzle Rocks out as a medication. Perhaps he’s looking to brainwash the town into all being on his side for something. Maybe he’s looking to get everyone addicted so he can drive up the price of the drug, or he just wants to fill his jail with drug arrests so he can make money; sadly, prisons can be a high profit venture. Who even knows why the Sisters are going along with all of this, but maybe they think they’re actually giving out medicine and that the Gargoyle King is some sort of demon sent to set them straight.

In any case, the hallucinations of the King seem at their highest when people are on the drugs. But since he can also be seen by presumably sober people, the question then becomes: are they all being drugged in secret? Or is the Gargoyle King really a real person haunting the town? Aguirre-Sacasa told The Wrap that we’d learn the King’s identity soon, so we’ll just have to wait to see who it is, and how exactly he connects to Hiram Lodge’s shady Fizzle Rock venture.