Home » We finally know who did it – so did Mare of Easttown give us the ending we wanted?

We finally know who did it – so did Mare of Easttown give us the ending we wanted?

This article contains major spoilers for Mare of Easttown.

Did it ever really matter who killed Erin McMenamin? Her death was the bait that dangled on the hook of Mare of Easttown (yet another young girl murdered in the name of prestige drama). The truth is, Mare could have been investigating fraud at the local high school, with as many secrets lying close to home, and it would have been compelling television.

What mattered was that Kate Winslet’s Mare got the ending she needed. And she did. She found peace, of a sort, in the house where her son Kevin died. She learned, finally, that she could love herself and be loved.

The revelation that it was young Dylan Ross, who accidentally shot Erin after he discovered the affair between her and his father John (was it weird that no one ever explicitly said this was a cousin-cousin once removed thing? That Dylan yelled at her to stay away from “my family” when she was family), was almost anti-climatic yet thrilling in how it played out. 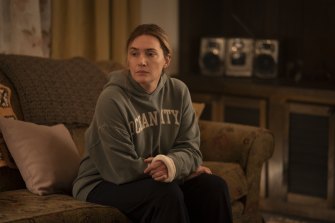 Kate Winslet in Mare of Easttown.

By the time we got to Ryan’s confession, the most harrowing thing about it was how it turned Mare and her best friend Lori against each other. The pair had been tight since high school, but now Lori had lied to Mare, even if it was to protect her son.

(There are a couple of plot gaps, which I’m happy to be corrected on, including when did Mr Carroll notice the gun was missing if Ryan returned it the same night he stole it and was that John’s burner phone that Ryan discovered the text messages from Erin on? And, if so, why was John carrying it when the relationship with Erin had already broken up? And, if it wasn’t the burner phone but John’s regular phone, why did Mare say in John’s interrogation they hadn’t found any contact from Erin, when clearly there is a text message from her, asking him to meet her at Brandywine Park?)

Mare of Easttown worked because of everything it wasn’t: it wasn’t a glossy book to TV adaptation, aka Big Little Lies, and it wasn’t wig and coat acting, aka The Undoing. It was rooted firmly in the believably domestic: the overflowing cupboards, the clothes horse in the bedroom, the bags of frozen vegetables, the Cheese Whizz squirted onto a chip.

It was Mare’s bed hair, it was everyone’s hair. It was the idiosyncratic Delco accents (parodied to perfection in Saturday Night Live’s Murdur Durdur, starring a “frazzled lady detective”). It was the push-push relationship between Mare and her mum, between Mare and everyone. It was Guy Pearce and his grey mullet driving off in his Jaguar (another high five to creator Brad Inglesby for giving Pearce’s Richard Ryan nothing else to do besides being arm candy, just like every woman in every show, ever).

But most of all it was Winslet. She holds focus as few actors can. Mare was made in Winslet’s small gestures – the eye roll in the interrogation room as John Ross explained his affair with Erin, her heavy footsteps as she drags herself up the stairs and her determined way to be disappointed by everything and everyone in her life.

But, in the end, Mare did what we wanted her to do: she started to forgive herself. Mare was always her own toughest critic – she was everyone’s toughest critic – but the final episode gave us the chance to see what life could be like for Mare. Her new normal.

There have been calls for a second season, with fans and critics echoing what Mare says to Richard: “Why do you have to go now, just when things are getting so good?”

But I’d like to leave her, with her feet up on the kitchen table, drinking a Rolling Rock and enjoying a ham, cheese and shredded lettuce hoagie. After what she’s been through, that’s the least Mare deserves.

Mare of Easttown is on Fox Showcase and Binge.