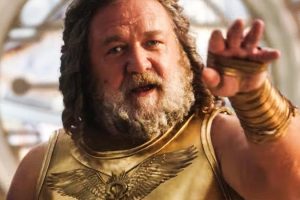 Thor: Love and Thunder might be one of the more silly and comedic offerings in the Marvel Cinematic Universe so far, but it’s Russell Crowe’s Zeus that stands out as perhaps the most bewildering character the superhero franchise has thrown up.

Dressed in form-fitting gold chest armour and a white pleated skirt, Crowe plays the god of gods as a preening narcissist. 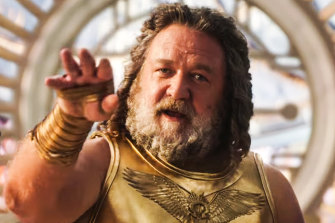 Giving Crowe’s Zeus affectations, such as his effeminate voice, that have historically been used to project a stereotype of male queerness was surely a risky choice in this era of instant internet outrage. If writer-director Taika Waititi gets away with it unscathed it will owe much to the fact his Marvel tragi-rom-com also has a queer superhero (Tessa Thompson as king Valkyrie) and a gay man of rock (Korg, voiced by Waititi), ensuring the representation of sexual diversity isn’t just a punching bag.

Crowe’s Grecian accent, though, is out there on its own. Not since the 1980s heyday of Mark Mitchell’s Con the Fruiterer has an Anglo-Aussie so boldly thrown caution to the wind by pretending to be Greek. Crowe doesn’t hedge his bets either. It wouldn’t come as a surprise to hear his Zeus promise to destroy the world in “a cuppla days”, because even though it’s “bewdiful”, humankind “doesn’t madda” much.

The internet has largely decreed that accents for the sake of comedy are off-limits these days. If a comedian is punching up it’s maybe OK, but if they’re punching down no way.

But even if you accept that as a guide, how do you assess Crowe’s stab at Zeus? Is it punching up at ancient mythic Olympians, or punching down at post-war Greek-Australian immigrants?

Wherever you land, it’s worth noting Rusty has form when it comes to dodgy accents.

Back in 2010, some people detected a hint of Irish in what was meant to be a northern English drawl in Robin Hood (Crowe claimed he’d modelled it on Michael Parkinson, and had even hung around the Yorkshire-born TV interviewer to perfect it).

But when BBC Radio 4 presenter Mark Lawson quizzed him on it, Crowe responded “you’ve got dead ears, mate, if you think that’s an Irish accent”.

“Hints of it,” Lawson demurred. 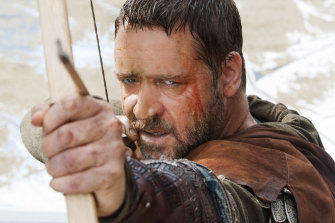 Irish you say? Your ears are dead, mate.

The implied insult clearly rankled for years because in 2018 Crowe took to Twitter to explain what was going on with his Robin Longstride in Ridley Scott’s film.

“A child born in Barnsley, on his father’s death taken to France at age six, travels across Europe to the Middle East on foot, fights in the third crusade for Richard I alongside men from all parts of Britain, Ireland and France, and finally returns to England a man in his 40s,” he wrote. Which presumably accounted for any slight wavering in dialect anyone with dead ears might have imagined – wrongly, of course – they could detect.

Crowe has been willing to have a go at an accent almost since he started out – and to be fair, he usually does a pretty solid job. But back in the early ’90s he nearly perished in the pits of a Welsh lilt in the Australian comedy Love in Limbo.

According to James L. Dickerson’s book Russell Crowe: The Unauthorised Biography, Crowe decided to model his accent on Anthony Hopkins, with whom he had just made the film Spotswood. And so, “at his own expense, Russell went to Wales and spent a couple of weeks living in a small town so that he could absorb the rhythm and tonal subtleties of the Welsh accent”.

Whether it was worth the effort is open to question, boyo.

But age has not wearied him, and in his upcoming film Prizefighter: The Life of Jem Belcher, Crowe again appears to be doing an Irish accent. But is he really?

The character he’s playing, Jack Slack, was born in England and was known as “the Norfolk Butcher”. According to cyberboxingzone.com, Slack “was strong and a very hard hitter but was clumsy and did not possess good boxing skills”.

Sadly, his propensity (or otherwise) for accents is not noted.