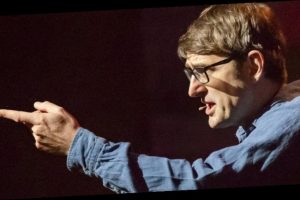 “Whether we acknowledge it or not, all of us are weirdos.”

British documentarian Louis Theroux may have a point. But some of us are certainly stranger than others. 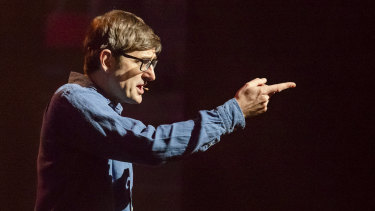 In a bare-all two-hour show hosted by Julia Zemiro, Theroux unveils how he stumbled into the wide world of journalism and the key to his success: ultimately getting involved with his subjects more than a journalist ordinarily would. Unafraid of embarrassing himself, he has been able to get his interview subjects – or contributors, as he calls them – to reveal more about themselves.

“Is this going to be my legacy?” Theroux ponders. “I always wondered if they blurred that enough!”

After a mildly unsuccessful search in the audience for the subject of his next documentary, he brings onstage Megan Phelps Roper, former contributor and member of the “most hated family in America”, AKA the Westboro Baptist Church, who is now a civil rights and anti-bullying advocate.

Theroux says of Roper, who he now calls his friend: “It makes me feel good that I can be a part of Megan’s positive journey,”. Among his circle of friends are also JJ, and Mike, the gun-toting “survivalist”.

But most interestingly of all is what Theroux, this time the subject of the interview, reveals about himself. “There’s part of me that lives vicariously through the series,” he admits.

“I compensate for my rather ordinary life by throwing myself into it as much as possible.”

END_OF_DOCUMENT_TOKEN_TO_BE_REPLACED

END_OF_DOCUMENT_TOKEN_TO_BE_REPLACED
We and our partners use cookies on this site to improve our service, perform analytics, personalize advertising, measure advertising performance, and remember website preferences.Ok