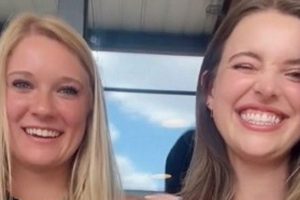 A woman has opened up to explain that her old sister is her "twin" despite being three years apart.

Michel and her sister, JJ, went on TikTok to tell their story to the viewers and sparked a discussion online.

"We were conceived in 1996, I was implanted first. JJ was frozen for three years," Michel started.

"She was born in 2000, but our parents still have our twins frozen 25 years later.

"So if we wanted, we could use the embryos and birth our own twins."

Her video has left many viewers telling her that they are "not technically twins" but simply "IVF siblings".

One explained: "You are siblings! Not twins ha. Twins = sharing same uterus. People who have same parents but did not share uterus = siblings."

"Definitely not twins, just siblings! Twins develop together," another added and a third shared: "Nope not twins just because you're from the same retrieval. I had 24 embryos frozen.

"They're not all twins. Only the two I carried at the same time."

While others were shocked when Michel said they are considering to birth their mum's embryo.

"So you could both birth your parents' kids? I am confused…" a viewer asked.

The TikToker answered: "Yes so hypothetically my child would also be my kid."

But one doubted and corrected: "I mean…genetically they’d only be your sibling, not child at all. You’d be the surrogate to your sibling."

Michel later added in the comments: "Okay, I know this isn’t REALLY twins. But we were conceived at the same time, same batch of eggs. Still pretty cool!"

Meanwhile, a young woman discovered she has an IVF sibling from her divorced parents over lunch.

"When you casually get told over lunch by your divorced parents that your 13-year-old brother is actually your twin but you're 19," she wrote.