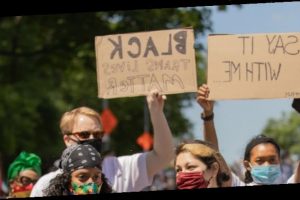 Back in the day, W started off the morning with a quick round-up of links to that day’s fashion- and culture-related news. Times have changed; in the weeks since a white police officer named Derek Chauvin killed an unarmed Black man named George Floyd, protests have erupted across the country. Now, more than ever, it’s important to stay up to date, which is why we’re reviving “Chic in Review” as the slightly more radical “Read & Resist.” Here are the stories, videos, and tweets we’re hoping you don’t miss this Wednesday:

“Racism Is Terrible. Blackness Is Not.” by Imani Perry for the Atlantic

A masterful essay by the Princeton University professor Imani Perry on Black joy, Black pain, and how the two intertwine—and ultimately, encapsulate the human experience. Perry links the past with the present, citing texts by Zora Neale Hurston written in 1928, and a haiku by Sonia Sanchez which opens with the line “Come, windless invader.” “I hope that no one is confused by my words. American racism is unquestionably rapacious,” Perry writes. “To identify the achievement and exhilaration in black life is not to mute or minimize racism, but to shame racism, to damn it to hell.”

The children have taken cancellation into their own hands. High school-age students around the country have started anonymous Instagram Snapchat, and Twitter accounts, in addition to Google Docs, which call out the problematic and racist behavior of their peers. According to one subject, the accounts are sometimes “region-specific, high school-specific and district-specific.” It’s easy to poke fun at the idea of teens pointing fingers online, but it could be a helpful way to educate their peers (and school administration) about widespread, pernicious behavior that might have once seemed acceptable.

“Capitalizing the ‘B’ in Black Is Nice, but Actually Hiring Black People in Your Newsroom Is Nicer” by Danielle C. Belton for The Root

You might have noticed a change in some publications you frequent: news and magazine writers have begun capitalizing the “B” in Black. (Or perhaps you didn’t notice this change until now, and I’ve just outed myself as a huge grammar nerd.) But this shift goes beyond just grammar—it’s been a long-debated issue at newsrooms for decades. “Some of us are adamantly for it, while others (myself included) are grammar freaks who think that if we capitalize ‘black’ we would also have to capitalize ‘white,’ and I, personally, have no interest in that as it would continue to center whiteness,” Belton writes in her essay. She then brings up a brilliant point: Why don’t we journalists, instead of splitting hairs about capitalization, release diversity figures and ways forward on how media higher-ups will hire Black people and people of color, especially in positions of power? Wow! What an idea.

“Here Are the 99 U.S. Cities Where Protesters Were Tear-Gassed” by K.K. Rebecca Lai, Bill Marsh and Anjali Singhvi for the New York Times”

Much has been said about tear gas over the past few weeks—in the demonstrations immediately following the killing of George Floyd, protesters were filmed pouring milk and water into the eyes of people who’d been tear gassed by law enforcement officials, from the elderly to children. Some streetwear enthusiasts were shocked this week to find out the brand Supreme was, at one time, linked to the production of tear gas in a somewhat tenuous way—its parent company, The Carlyle Group, owned a stake in Combined Systems Inc., a manufacturer of tear gas used by police departments nationwide. No two ways about it: tear gas has emerged as a central symbol for brutality in the current Black Lives Matter movement. This morning, the New York Times published a comprehensive compilation of every city where protesters were tear gassed since late May, when demonstrations began. Harrowing photographs and video bookend this must-read story.

Related: For Some Protest Photographers, There’s No Such Thing as Neutral